Karin Maaka is main character of Chibi Vampire/Karin. She is the love interest of Kenta Usui and the middle child in a family of vampires.

She is voiced by Sayuri Yahagi in the Japanese version and Chelsea Curto in the English version.

Karin goes too long without biting someone and tries to hold her blood in, she enters a "berserker"-like state and aggressively attacks the first target she can find.

She is descended from a long line of purebred vampires. However, instead of having to drink blood like normal vampires, Karin's body overproduces blood. Generally, once a month she reaches a point where she can no longer hold it in, and she must bite someone to inject them with her blood or else suffer from a massive nosebleed.

Being near a person suffering misfortune causes Karin's blood to increase ahead of schedule. Due to her unusual situation, Karin lives like a normal human rather than a vampire. She lives in the daylight, is not susceptible to common vampire weaknesses and lacks the skills normal vampires have. These differences cause her to be somewhat separate from her parents and older brother, whom she only sees for a few hours in the time before she goes to sleep (she spends more time with her younger sister Anju, who has not yet awakened as a vampire).

Karin meets Kenta Usui and is dismayed that her blood increases around him. He has a lot of misfortune in his life. Karin resolves to do favors for him and thus reduce his misfortune and her blood problems around him. As the series progresses, Karin falls in love with Kenta. He returns her feelings, though Karin is initially troubled to learn that human-vampire children are born sterile. Karin is rendered unconscious for several days after trying to hold in her blood and suffering a massive nosebleed, during which time her family grows increasingly concerned that her condition would kill her. Her mother journeys to her birthplace in search of answers and learns that Karin is a rare vampire, called the "Spring of Psyche", that is born when the vampire species is struggling. The blood Karin produces can bestow fertility in other vampires.

Karin is later kidnapped by vampires who want to feed from her to rejuvenate their own lives, though it will kill Karin in the process. They also plan to impregnate Karin against her will to continue the Psyche's existence. After Kenta and the Marker family save Karin from the Brownlicks, her nose-bleeding ceases, leaving her as though she were a normal human, who will likely grow old and die. Her family erases all of her memories of vampires, including themselves, promising Kenta that they will continue watching over her happiness although she will not know them. At the end of the series, Karin and Kenta have married and are shown to have a teenage daughter named Kanon.

Karin has the opportunity to become a full vampire, which she initially declines, but then pursues after Kenta encourages her. The transformation is interrupted and Karin goes berserk. Kenta comes to her rescue by volunteering to be bitten, ending the berserker rage, confirming their romantic relationship, at the end of the anime she is still "un-vampire", is still dealing with her blood-making issue, still has of all her memories and still lives with her family and spend lots of time with Kenta. 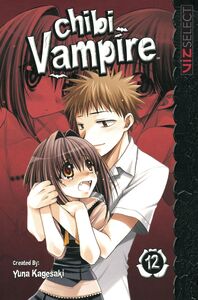 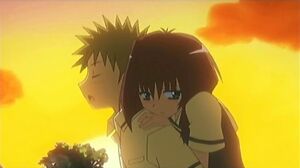 Add a photo to this gallery
Retrieved from "https://hero.fandom.com/wiki/Karin_Maaka?oldid=1518290"
Community content is available under CC-BY-SA unless otherwise noted.