Playing with Sakura and Rin

Kariya Matou is a supporting protagonist in the light novel and anime series Fate/Zero. He is the son of Zouken Matou, the brother of Byakuya Matou, and the uncle of Sakura and Shinji Matou. He is the Master of a Berserker-class servant during the Fourth Holy Grail War.

He is voiced by Tarusuke Shingaki in the Japanese version of the anime and Liam O'Brien in the English version.

He wears a blue hoodie with black cargo pants. Unlike his brother or nephew, he has black hair and darker eyes.

After he is implanted with crest worms, half of his limbs become dysfunctional and distorted, resulting in a limp. He has a sickly pale complexion brought on by the constant deterioration of his health. On certain parts of his face, veins protrude and when Kariya uses magecraft, crest worms are seen squirming under the surface of his skin, specifically around his face. His hair turned completely white from shock and he went blind in one eye. He is usually seen with his hood up to better conceal his face. In the original novel, Rin compares his physical appearance to that of a cancer patient.

Kariya is a good-natured person whose reason for originally leaving his family was out of disgust for their horrible and inhumane practices. He was willing to give up on pursuing a romance with Aoi because he genuinely loved her, and initially thought she would be happy with Tokiomi. He is shown to be good with children with both Rin Tohsaka and Sakura taking a strong liking to him.

Kariya also displays a strong determination and a remarkable capacity to endure pain and suffering after Crest Worm implantation. Due to Crest Worms also slowly eating away at his brain and the constant pain he has to endure, Kariya also becomes unable to perform complex thinking, and causes him to be easily manipulated by others as a result.

Though he genuinely wishes to save Sakura and help Aoi, he is unable to understand that despite giving Sakura away, Aoi still truly loves Tokiomi and she does not want him and Kariya to fight. Oblivious to Aoi's true feelings, Kariya makes Tokiomi's death one of his main goals in the war.

At the end, his deepest wish is revealed: to win Aoi's heart, and to be called 'Daddy' by Sakura and Rin.

Matou Kariya is the younger brother of Byakuya Matou, though he has actually severed ties with the Matou family for about ten years out of disgust. Disappointed with the lack of sorceric potential in Byakuya and his son, Shinji, Zouken Matou blames Kariya for allowing the Matou's magical lineage decline since Kariya is the first in many generations to be born naturally capable of sorcery.

Character Material reveals more details about his past. Zouken knew of Aoi's special trait to bring out the best in her children's powers, and planned to set her up with Kariya, which resulted in the two befriending each other and Kariya falling in love with her. However, one day Kariya found out Zouken's plans for the heir, and he willingly gave up his romantic pursuit of Aoi and left Fuyuki in order to protect her from Zouken. When he returned, she was already engaged to Tokiomi Tohsaka, so Kariya peacefully gives up trying to pursue her affections because she seemed to be happy accepting her engagement to Tokiomi.

Aoi would later have two daughters, Rin and Sakura, who both came to like Kariya a great deal. In turn, Kariya loved them almost as if they were his own daughters.

One year before the Fourth War, Kariya discovered that Sakura, who possessed a greater potential to become a strong magus than either Kariya himself or his brother Byakuya, had been handed over to the Matou family. Because Magi families traditionally raised only one child as an heir, Tokiomi had agreed to Zouken's request for his youngest daughter, supposedly for the intention of reviving the Matou family's stagnant bloodline.

Enraged at Tokiomi's treatment of his daughter and the grief that it caused Aoi, Kariya made a deal with Zouken: Kariya would participate in the 4th Holy Grail War and win the Holy Grail, which he knew to be Zouken's primary goal. In exchange, Sakura would be allowed to return to her family. However, because Kariya lacked any formal training as a Mage, Kariya insisted on implanting numerous Crest Worms into his body. The worms would literally eat away at their host, causing Kariya's health to progressively fail, in return for significantly expanding his magic circuits and magical potential. By the time of his summoning of a Servant, Kariya's hair is white and the left side of his face and body paralyzed with many other complications. However, despite the Crest Worms and his own accelerated training, Kariya remained severely lacking as a Magus. At Zouken's behest, he compensated for this by summoning the most powerful of the seven Servant classes - the Servant of Mad Enhancement, Berserker.

During their first two battles, Kariya's hatred for Tokiomi leads to his focusing solely on dispatching Tokiomi's Servant, Archer. Both attempts end in failure, due largely in part to Berserker's obsession with Saber leading him to engage her against his Master's orders. Berserker is struck down from behind by Rider in the first instance, and Archer in the second. Kariya's attempt to engage Tokiomi directly also ends badly, when the former is thoroughly out-classed and left for dead. His problems are further compounded by his failing health and excruciating pain, due to the high mana requirement of manifesting a Berserker-class Servant. After his defeat to Tokiomi, Kariya recovers from his serious injuries with the help of Kirei Kotomine, who secretly heals him without his mentor Tokiomi knowing.

Following the defeat of the rogue Caster, Kariya is again approached by Kirei Kotomine. In return for kidnapping Irisviel von Einzbern using Berserker in the guise of Rider, he is promised victory and the Holy Grail. To this end, Kirei replenishes Kariya's spent Command Spells with spare seals he received from his deceased father. Kotomine's promise amuses Zouken, who sees through the priest's deceptions and reveals that he had never expected Kariya to win the War in the first place.

Kariya confronts Tokiomi, only to find him already dead, seconds before Aoi walks in on him. She misinterprets the situation, and in her grief blames him and the Matou family for taking away both Sakura and her husband. She accuses Kariya of never having loved anyone, completely oblivious to how he had always loved her. This breaks Kariya's heart and his resolve, revealing that he endured it all for her sake in the first place, causing him to blindly lash out and strangle her in a moment of temporary madness. It is later revealed that the entire event had been orchestrated by Kirei, whose sole intent was to derive amusement from it. Kariya later returns back to himself and has a psychological breakdown as he leaves the church, believing he murdered Aoi.

On the last day of the 4th Holy Grail War, Berserker faces off against Saber, culminating in a battle so ferocious that Berserker draws more mana than Kariya can provide. His Servant killed, Kariya survives long enough to make his way back to the Matou estate, where he is approached by Sakura. He tells her that he has come to rescue her, but collapses at her feet soon after. Kariya dies with a satisfied smile, comforted by dreams of escaping with Aoi, Sakura, and Rin and starting a family together.

Kariya, alongside Byakuya and Zouken, were mentioned by Shinji, saying that they all sulked about their lives because they were Matous. Shinji simply refers to Kariya as "my father's younger brother".

Kariya did not receive childhood training in magecraft like many of his opponents in the Fourth War, thus leading him to be one of the weakest Masters, only beating Ryuunosuke Uryuu for skill or experience. To his advantage however is the unique nature of the Matou Crest Worms. Allowing him to be forcibly injected with prana and spells, the Crest Worms transformed Kariya into something of a glass cannon magus. While his body became incredibly weak and easily broken, he gained the ability to fight using an evolution of the Crest Worms called Blade Wing Worms, carnivorous flying insects that strip flesh like piranhas. Kariya's Servant, Lancelot, is a Berserker-class servant. Much like all previous Berserkers, he requires many times more prana than regular Servants in order to remain materialized. Due to Kariya's fragile state of health, every single one of Berserker's fights leaves him in excruciating pain and brings him even closer to death. Despite his lack of training, his Master aptitude is extraordinarily high for a makeshift magus, which would have allowed for him to support Lancelot in a different class quite well. Kariya displays remarkable fortitude even with the absolutely absurd magical energy consumption, his goals of killing Tokiomi Tohsaka and saving Sakura, all for the sake of Aoi, his true motivation, allows him to keep going physically and to dominate Berserker's will with his own to force the rampaging Servant to focus on Gilgamesh. It could be said that he should be praised for enduring as long as he did during the War. Due to the strain from Berserker draining his energy at the end, it killed all of the Crest Worms in Kariya's body, indicating to Zouken that he was doomed. 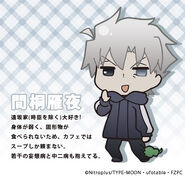