Member of the Master of the Mystic Arts (formerly)

Rid the world of sorcerers (ongoing).

Karl Mordo is the deuteragonist of the 2016 film Doctor Strange, as his Earth-838 version of him appeared in the 2022 sequel Doctor Strange in the Multiverse of Madness.

Karl was an apprentice of the Ancient One who learned the Mystic Arts and the paths of alternative dimensions. Complex and intense, he could well turn out to be a friend, a rival, or a bitter enemy to the Ancient One's latest pupil. Once he learned that his mentor harness magic from the dark dimension to obtain immortality, Mordo became disillusioned with her cause, and left the mystic arts after Stephen Strange abused the Eye of Agamotto to stop Dormammu. Believing the the world was suffering from an imbalance due to rogue sorcerers, Mordo would travel across the world to eliminate them.

He is portrayed by Chiwetel Ejiofor, who also played Conall in Maleficent: Mistress of Evil and Solomon Northup in 12 Years a Slave, and also voiced Dr. Gnome Watson in Sherlock Gnomes.

He is a former member of the Masters of the Mystic Arts and had been a close ally to the Ancient One, assisting in recruiting and training their future sorcerers. When Mordo had encountered Stephen Strange, he invited him into Kamar-Taj, despite the Ancient One's objections, and had later aided him with the conflict against Kaecilius and the Zealots. During this battle, Mordo learned that the Ancient One drew all her power from the Dark Dimension, which had been forbidden to all the Masters. Following the death of the Ancient One at the hands of Kaecilius, who had also been defeated before he was able to bring Dormammu to Earth, Mordo was so mortified by this betrayal that he foolishly turned his back on his allies, and choosing to restore balance by stripping sorcerers of all their powers.

At some point in Mordo's life, he suffered from a great loss by unknown enemies, and desired to get revenge against them. He was later inducted to the Masters of the Mystic Arts by the Ancient One, who taught him how to use eldritch magic and protect the world from mystical threats. Karl would leave his vengeful quest behind, as he became devoted to the Ancient One's cause.

While in Nepal, Mordo overheard Stephen Strange asking for directions to Kamar-Taj, and later rescued him from muggers trying to steal his watch. He then decided to bring him to Kamar-Taj to meet the Ancient One, who refused to train Strange due to his arrogant behavior. Mordo managed to convince her to change her mind, reminding her that he was once brash until she showed him the way, and that they help to stop Kaecilius. Karl and the Ancient One proceeded to train Strange the ways of the mystic arts, with the former latter teaching Stephen martial arts. The temple was later raided by Kaecilius and his Zealots, which led to Mordo and Strange fighting them within the mirror dimension of New York.

During the battle, Kaecilius revealed that the Ancient One was harnessing magic from the dark dimension to remain immortal, which was against her belief since the dimension was tied to Dormammu. Mordo was shocked at the revelation, and became disillusioned to her cause, believing that she was the reason for Kaecilius' fall. Despite this, Mordo agreed to help Strange stop the Zealots at the Hong Kong Sanctum, where Dormmamu had arrived. Strange managed to stop Dormmamu by using the Eye of Agamotto to make a bargain, which further disillusioned Mordo and he decided to leave the mystic arts. During his travels, Karl came to the belief that rogue sorcerers where abusing their power and causing an imbalance in the world. He then decided to eliminate all sorcerers by taking their powers, first starting with Jonathan Pangborn.

Mordo is mentioned but doesn't appear in the film, with a different version of him appearing as secondary character during Doctor Strange's journey across the multiverse. The different version was the sorcerer supreme of his universe, and became an appointed member of the Illuminati after Thanos was defeated.

Mordo was complex yet intense, as he was once a vengeful man who only traveled to Kamar-Taj to gain power and defeat his enemies. The teachings of the Ancient One humbled him, and he decided to leave his vengeful quest on focus on maintaining the natural law of the world. As a result, he was rigid and refused to break the natural law even if needed, as shown in his distaste in Doctor Strange using the Eye of Agamotto to bargain with Dormammu. Due to his inflexibility, Mordo became disillusioned with the Ancient One's cause, and believed that Strange lacked a spine to kill his enemies. After leaving the mystic arts, Karl's demons returned, turning his worldview into believing that rogue sorcerers needed to removed to maintain the natural law. 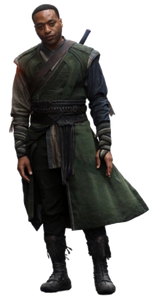 Mordo watching the Ancient One introduce Strange to the mirror dimension.