Help Sunspot with the new A.I.M.
Protect her family (who are more important to her then anyone else).

Karma (real name Xi'an Coy Manh) is a fictional superheroine from Marvel Comics, and is featured in the New Mutants and X-Men comics.

Karma is a mutant with the ability to mentally possess other beings. A founding member of the New Mutants, she is one of the few confirmed and openly lesbian characters. She lost a leg and now has a cybernetic one in its place.

She was created by Chris Claremont and Frank Miller, and first appeared in Marvel Team-Up #100 in December of 1980.

Karma is a mutant endowed with the ability to seize control of another's mind, though she has sometimes been depicted with other more extensive psionic abilities. The origin of the character relates to the Vietnam War, as she and her family were among the boat people fleeing the country shortly after the advent of Communism and in the wake of violence. Her Vietnamese origin contributes to two of her main traits—her Catholicism and her mastery of the French language, both of which stem from France's strong historical influence in Vietnam. Karma, in fact, speaks English with a French accent rather than a Vietnamese one.

Xi'an Coy Manh grew up in war torn Vietnam, as her family travelled around the country where-ever her uncle, General Nguyen Ngoc Coy, was posted. She discovered her mutant power when a Viet Cong was about to kill her twin brother Tran Coy Manh. She possessed the soldier's mind, and commanded his body to move away from her brother. However, Tran realized that he shared the same mutant power and possessed the soldier after Xi'an had released him. Instead of moving the soldier away, Tran commanded the Viet Cong to smash his own head repeatedly against a wooden post, thereby killing the possessed soldier. Xi'an was appalled, and immediately refused to use her powers for personal gain like her brother. However, Tran shared this new knowledge and power with their uncle. The General vowed to protect his nephew and the two formed a dangerous partnership.

When South Vietnam fell, General Nguyen arranged the evacuation. However, only he & Tran were on the transport, leaving Xi'an with her mother, father, and the younger twins Leong & Nga. The shattered family struggled to survive and fled Vietnam. Like many hundreds and thousands of other refugees they slowly sailed across the sea to reachAmerica. Xi'an had grown accustomed to using her possessing mutant powers to aid them in their escape. However, after months of traveling and starvation, Xi'an fell ill and was too weak to use her power against pirates. She could only watch in a half-daze as her father was murdered and both she and her mother were raped. It was soon after when they were saved by the American Armed Forces, but sadly on that day Xi'an's mother passed.

Originally Xi'an and the twins were sent to live with their uncle & brother. The General approached Xi'an to work for him like Tran did, but she refused. She took the twins and found refuge with Father Bowen, who had been a soldier fighting in Vietnam & was sympathetic to their cause. He helped them find an apartment, secured employment for Xi'an and even arranged for her to start school. However, the General had the apartment ransacked and kidnapped Leong & Nga. That spurred Xi'an into action.

Mutation: Karma has the same mutation as her twin brother with occurred whenwhen they were 14 to 15 years old. Karma and Tran both have psychic and telepathic powers. 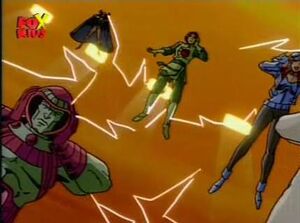 Retrieved from "https://hero.fandom.com/wiki/Karma?oldid=2215428"
Community content is available under CC-BY-SA unless otherwise noted.