Writing Fanfics about Hiro and her

To be better than Hiro (formerly)

Envious Rival
Karmi is a recurring character in Big Hero 6: The Series. She is a young student at San Fransokyo Institute of Technology, who specialises in biology.

She was voiced by Haley Tju.

Karmi primarily spends her time nurturing her organisms at the SFIT biometric lab. On her downtime, Karmi writes fanfiction of Big Hero 6 (team); despite her standoffish nature, it has garnered a dedicated following in the SFIT campus. She is also a talented artist, having sketched Hiro's alter-ego in great detail at one point.

Karmi and Hiro are very much alike. They are both scientific geniuses who attended college at a young age, which Karmi takes great pride in. Whenever she is around Professor Granville, she puts on a forced smile and acts optimistic and engaged, when in actual fact she is the sort of girl who likes to keep to herself. As a result, she is more comfortable in her research than engaging in social interactions. Due to her lack of social interaction, Karmi devotes herself to her work and hobbies, in which she finds comfort. She has an obsessive relationship with her virus samples, seeing them as the only true companions she has. She treats them with affection, going as far as to giving them names. When one was destroyed, she reacted in horror.

After being rescued by Big Hero 6, Karmi became a diehard fan of the team—specifically the team leader (Hiro) whom she developed romantic feelings for. Ironically, Karmi resents the actual Hiro due to having to share the spotlight as the youngest genius in the school. Out of spite, she repeatedly teases Hiro and enjoys watching him be humiliated. She also believes that Hiro is crushing on her, much to Hiro's annoyance. By the two-part mid-season finale of season 2, Karmi and Hiro eventually befriend one another after learning how much they have in common.

Though intelligent, Karmi has her moments of obliviousness. This includes her mistakingly believing Hiro to have a crush on her, and being unable to recognize Hiro when he is in his superhero garb. She was also unable to realize that Liv Amara was bad, even calling Hiro out on confronting her. However, at the end, Karmi realized that Liv was insane and tells Hiro he was right about Liv Amara.

Karmi is an adolescent girl with olive tan skin, long brown hair, and is a little taller than Hiro, although the two are close in age. She ties her hair back in a ponytail, and wears a cream-colored turtleneck, black pants under an orange skirt, and black shoes. For accessories, Karmi wears red earrings and two red and yellow bracelets on her left wrist.

Role in the Big Hero 6: The Series

Professor Grandville first introduced Hiro to Karmi in "Issue 188" as a means of improving Karmi's social skills. Karmi did not want anything to do with Hiro, and treats him with disdain and annoyance. However, Hiro discovers that Karmi has a crush on his superhero identity. Fortunately, Karmi does not realize Hiro's secret and fails to see the resemblance, even when she got a good look at his face during a fight against High Voltage. Hiro actually consults his friends on why Karmi is unable to recognize him when suited up. Fred comes to the conclusion that "people see what they want to see". While filing a report to Granville about their week together, Hiro claims that he learned a lot from Karmi. Karmi is shocked that Hiro did not rat about her behavior and assumes Hiro is crushing on her, which he denies.

In "Failure Mode", Karmi records and takes pictures of Hiro with her phone when his fail attempts in Grandville's earthquake-proof building project causes him to make a fool our of himself, and posts them online so others could see. Despite her having a few problems and kinks with her own model. When Hiro finally passes and gets a higher grade than hers, he takes a picture of her reaction as payback.

In "Small Hiro One", Karmi attends a lecture had by Trevor Trengrove. Hiro is denied entry due to his age, which Karmi uses as teasing ammunition. Ironically, Karmi ends up getting kicked out by Trengrove. When Hiro tries to comfort her over the matter, Karmi is genuinely appreciative, hinting at a softening relationship between the two (they both pull away in disgust upon realizing how kindly they're treating each other).

It is revealed in "Fan Friction" that Karmi writes fan fiction about Big Hero 6 with herself depicted as "Captain Cutie's" girlfriend, leaving Hiro feeling embarrassed. However, much of her fan fiction proved useful to the team. Go Go discovered she could skate vertically up walls, Fred and Honey Lemon found it possible to make ice showers together, and Hiro managed to upgrade Baymax with an actual "Overdrive mode". Karmi's stories—and more specifically, her role as "Captain Cutie's" girlfriend—caught the attention of Obake. One night, Karmi was kidnapped by Momakase and taken to Krei's old lab on Akuma Island, which was scheduled for demolition. She was used as bait to lure Big Hero 6 into a trap. Both Karmi and Big Hero 6 were trapped in a impregnable cage, but by using new techniques inspired by Karmi's fan fiction, successfully escaped before everything on the island was disintegrated. Once they made it to safety, Hiro attempted to criticize Karmi for her fan fiction, but, unable to hurt her feelings, commended her instead. Karmi then wrote the next chapter of her fan fiction, which involved herself becoming the seventh member of Big Hero 6 and sharing a kiss with "Captain Cutie".

In "Big Problem", biologist Liv Amara visits the SFIT campus in sponsorship of a new bio-tech building that's about to be unveiled. Karmi leaps at the opportunity to meet her idol. She presents her latest invention—extradermal nano-receptors—which impresses Liv so much that she offers to provide funding for Karmi. The two then spend the day together bonding over biology, which unintentionally infuriates a jealous Hiro. At the gala commemorating the new bio-tech building, Liv gives a special shoutout to Karmi during her speech. Unfortunately, the gala is interrupted by a monster out to attack Liv. Big Hero 6 battles the beast, but they are overpowered even with their new battle armor. While the attendees flee, Karmi stays behind and uses her nano-receptors to sedate the monster. Not only does this save the day, but it also gives Liv further incentive to support Karmi and her endeavors. "Captain Cutie" thanks Karmi for her assistance despite his jealously, to which Karmi responds by awkwardly professing her love for the hero. 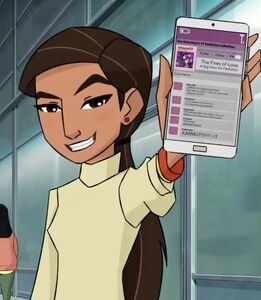