Lancer of Red, Lancer, Launcher (in Fate/EXTRA CCC), Hero of Charity, Hero of Giving, Son of the Sun God

Lancer-class servant of the Red Faction.

Rescue his former master (succeeded).
Have a duel to the death with Siegfried (succeeded).

Karna (in Japanese: カルナ, Karuna), also known as Lancer of Red (in Japanese: 赤のランサー, Aka no Ransā), is a major heroic protagonist in the light novel, manga and anime series Fate/Apocrypha. Since his introduction in the aforementioned series, Karna has made several appearances in various works of the Fate franchise. He appears as a playable servant in the PS Vita tower-defense game Capsule Servant and minor character in the gag manga Type-Moon Academy Chibichuki!. In the video game Fate/EXTELLA, Karna acts as a servant of the Launcher (in Japanese: ランチャー, Ranchā) class and second in command for Tamamo no Mae's party. In EXTELLA's sequel Fate/EXTELLA LINK, Karna is a member of Karl der Große's party. He also makes an appearance in the video game Fate/EXTRA CCC and its accompanying manga Fate/EXTRA CCC Fox Tail as the Launcher-class servant of Jinako Carigiri. Lastly, he appears as one of the playable servants of Ritsuka Fujimaru in Fate/Grand Order.

Karna was a member of the Red Faction during the Great Holy Grail War under the command of Shirou Tokisada Amakusa. Over the course of the war, he developed a rivalry with Saber of Black, who served the Yggdmillennia Clan. Eventually Karna was killed by the homunculus Sieg at the climax of the war.

Karna was voiced by Kōji Yusa in the Japanese version of the anime and by Chris Niosi in the English version, the latter of which also voices Haruo Sakaki in the Godzilla anime trilogy. As suggested by his name, Karna is loosely based off of the Hindu hero of the same name.

Early on in the War, Karna was sent by the Red Faction's leader Shirou Kotomine to assassinate Ruler, the arbitrator of the Great Holy Grail War. Encountering her on a deserted country road at night, Lancer fired a burst of flame mana upon the servant. Ruler identified Lancer of Red as Karna, and then proceeded to reveal herself as the Maiden of Orleans: Jeanne d'Arc.

She made a point of the fact that assaulting her was in clear violation of the War's rules, however Karna ignored her, stating that he was only following his orders. As Karna prepared to obliterate Ruler, Saber of Black and his master Gordes Musik Yggdmillennia arrived to defend the arbitrator of the War.

Yggdmillennia requested Ruler to assist his servant in defeating Karna, however she refused because she had to stay impartial to the battles of the War. Regardless, Lancer of Red and Saber of Black formally introduced themselves to one another and began dueling. Both combatants unleashed tremendous amounts of power and thoroughly enjoyed their first duel since arriving in the modern era. As morning arrived, Karna disengaged with Saber of Black and drew attention to the fact that Saber's master was growing impatient with him. Lancer promised Saber that they would duel once again and subsequently de-materialized.

Physically speaking, Karna was a young man with a delicate frame and skin as white as chalk. His unkempt white hair has been described as fairly long and transparent-like. His light blue eyes were apparently sharp like a steel blade.

Embedded in Karna's chest was an eye-catching red gem that projected an enthralling illustriousness. Kavacha and Kundala were by far the greatest spectacles on his body, despite his other striking features. This suit of armor and earrings were gifted to Karna by his father at birth and grants him an invincible protection, although both were eventually destroyed when Karna unleashed Vasavi Shakti on Sieg.

Unlike most of the Servants of Red, Karna had no specific wish for the Greater Holy Grail. Instead, his most prominent wish in his new life was to have a rematch with Saber of Black after their duel at the beginning of the conflict.

Karna seemed to have a strong desire to fight powerful opponents. Although he was originally apprehensive to fight Ruler due to her station in the war, he was able to go through with it after convincing himself that she would be a mighty opponent. Furthermore, upon dueling Siegfried for the first time, Karna quickly became obsessed with fighting him in a duel to the death.

With the exception of Assassin of Red, Karna arguably showed the most loyalty to Shirou Amakusa out of any of the Servants of Red. When Shirou revealed himself to possess the Command Seals of every Servant of Red, Karna was the first Heroic Spirit to side with his cause.

Karna's nature as a soldier is what made him display such loyalty to his master. When issued an order, Karna never considered what he was being asked to do, he would merely follow the order to the letter. However, he has displayed independent thinking, such as when he bargained with his enemies to save his original master, an act which went against the desires of Shirou.

Character concept sheet of Karna for the anime adaption of Fate/Apocrypha. 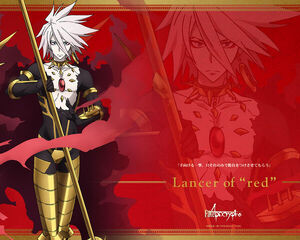 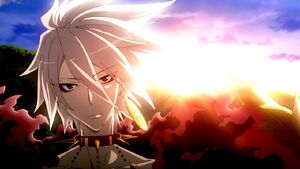 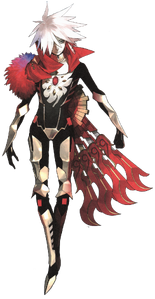 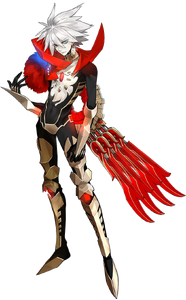 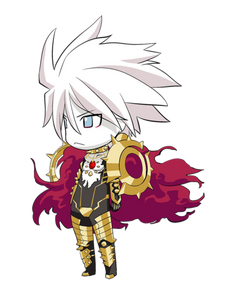 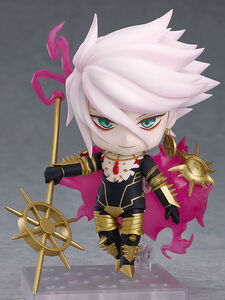