Karolina Dean is one of the main protagonist in the Hulu tv series Runaways. She is the daughter of Leslie Dean, and the exiled Gibborim Jonah, and later learns that she has light powers.

She is portrayed by Virginia Gardner, and Valentina Gordon young. Gardner also played Vicky in the 2018 film Halloween.

Karolina was born in early 2001 to Leslie Dean and Gibborim Jonah, but was raised by Frank Dean, Leslie's husband. Due to being born with Gibborim light that she inherited from her father, she was given a Church of Gibborim bracelet and her family made sure she never took it off.

She was friends with Amy Minoru alongside Chase Stein, Alex Wilder, Nico Minoru, Gert Yorkes and Molly Hernandez, but loss touch with them when Amy passed away. As a result of losing her friends, Karolina became a faithful member of the Church of Gibborim, and would help her mother recruit new members, and attended the Atlas Academy.

At the academy, she overheard Alex inviting Chase to come over to his mansion, and Gert joined in on the conversation. Karolina told Alex that she would be busy with a church event, and she later got into an argument with Gert, but it ended when the bell rung for class. When doing an interview for the church, she was approached by Destiny Gonzalez, who informed her that she was getting better, and expressed her rebel side.

Later on, Karolina attended a party where she took off her bracelet to hide her religious beliefs, and became entranced when her hands began to glow. She fell unconscious, and was nearly raped by her classmates Brandon and Lucas, but Chase stopped them, and put her bracelet back on. Chase decided to take Karolina to Alex's mansion, and met with Alex, Nico, Gert and Molly, and urged her former friends to talk about Amy's death so they could move on.

The group went to find alcohol from Alex's father, Geoffrey, office, and accidently opened a secret passageway. Going inside, the group saw their parents performing a ritual, and she witnessed Destiny be put into a Dematerialization Box. Molly took a picture of the scene, forcing them to run away, and Alex left to cut the power in the mansion, allowing the others to move into the guesthouse.

Karolina, Chase and Gert discussed rational explanations on their parents' behavior, but found flows in their theories. Once Alex returned, the group decided to act friendly so their parents wouldn't suspect anything, and pretended to play twister until their parents returned. Karolina was taken home by her mother, and the latter expressed her enjoyment upon seeing her being with her old friends. At home, Karolina messaged Destiny to see if she was alright, and later received a response, eliminating her concerns about what she and her friends saw.

At school, Karolina met with the others and showed them Destiny's message, but the others believed the picture was a fake. Afterward, she decided to return to the church to get information on Destiny, and ran into Vaughn Kaye. The next day, Karolina saw Chase fight Brandon and Lucas, and Eiffel blamed Karolina for the incident, as she accused her of flirting with Brandon and Lucas. After school, Gert approached Dean, and suggested that they find more evidence on their parents' innocence, and went to the Dean Mansion so they see if the church and the ritual were connected.

The two found Leslie's laptop with an encrypted file related to the Ultra Project, and decided to send it to Alex so he could decrypt it. Chase arrived and requested to speak with Karolina privately, and revealed that he was leaving the lacrosse team, and admitted that Brandon and Lucas attempted to rape her at the night of the party. Karolina decided to trust Chase, and revealed her light powers, and he comforted her on that her powers were the most beautiful thig he ever saw.

Later that night, Karolina received call from Nico, who informed her that Alex decrypted the file, and that it contained a list of all of PRIDE's victims. During their conversation however, Nico screamed and told Karolina that Alex was kidnapped, and Dean met with Minoru at the Timely Coffee. Karolina feared that the kidnappers were affiliated with the church, but was comforted by Nico before Molly and Gert joined them. Nico used the Staff of One to reveal the path the car the kidnappers were driving went, and they managed to reach out to Chase for help.

The group managed to rescue Alex from Darius Davis, and Karolina used her light beams to distract the kidnapper. After Darius realized that he couldn't stop them after being hit by Chase's fistigons and Nico's shield, he ran away. The friends went to the Timely Coffee and were amazed by their abilities, and Karolina was overjoyed that her friends accepted her with her powers. Alex informed the group that he believed that their parents were preparing to sacrifice Andre Compton, but when returning to the ritual room, they found it empty.

After doing some investigating, they found a camera, and Alex that the camera had data stored on the Wizard servers, and they he would have to find a way to hack it. The group returned to their homes, and Karolina threw away her belongings that were related to the Church of Gibborim, crying that shew as part of the organization.

The Runaways decided to infiltrate the Wizard severs during the PRIDE gala that was being held at Wizard headquarters, and Karolina almost confessed her feelings for Nico. During the gala, Gert and Karolina had an argument about each other feelings for another person, and Karolina revealed that Gert had a crush on Chase. Afterward, Karolina went to the roof with a bottle of alcohol, and nearly died when she fell off the roof, but survived due to her powers, revealing her ability to fly in front of Chase.

The two returned to the gala, and discovered the affair between Chase's mother, Janet, and Nico's father, Robert. Towards the end of the night, Karolina was approached by a man named Jonah, who said that he was friends of her mothers, and wanted to meet her there. The following day, Karolina comforted Molly, as she revealed that she admitted to Catherine Wilder that she knew of the Rite of Blood, and later when she wasn't recruited into Eiffel's squad. Karolina helped Molly with the dancers' towels, and praised her optimism, and the two discussed of each other's powers.

After Karolina and Chase overheard the Yorkes and Wilders talking to each other, they both assumed they were talking about Hernandez. The two called the others, and the group decided that it was time to take their parents to prison for their crimes. That night, Karolina received a call from Chase, who said that his father was wounded, but apologized that he shouldn't have involved her. She attempted to call to Nico and Molly, but Gert responded to the call and said that Molly was sent to Montebello, and the two decided to meet to support Chase.

Karolina was picked by Gert, who was unnerved by the fact that she brought along her dinosaur, Old Lace. The two went to the Stein Mansion, where they saw Jonah arrive there, and saw Stein arguing with Frank. Karolina told Chase to go see Gert in his bedroom and went to her father, telling him everything as he wasn't a member of PRIDE. She joined the others and Alex told them he decrypted the video file showing PRIDE's crimes, and Karolina suggested that they should keep the file for themselves so Frank could help them. Chase and Alex go into an argument, as the former believed his father would die if they released the video, and he later destroyed Alex's laptop during their fight.

Karolina returned home, where Frank talked to her on bravery with her friends, but told her to abort their plans. Karolina attempted to keep the group together, and they decided to go to the academy's dance after Dean was insulted by Eiffel. Later on, Molly returned from Montebello with a VHS that was left behind by her parents, and it revealed the consequences of PRIDE's actions. Also, the group figured out that PRIDE was using the PIRDE construction site as their front for their plans, and decided to infiltrate it and go to the dance to gather.

At the dance, Karolina admitted her feelings for Nico, and the two later saw Chase and Gert together, presumably after having sex. At the construction site, the group were confronted by their parents, and refused to listen to their lies and decided to fight them. When Chase's fistigons were unable to go through Tina's staff, Karolina revealed her powers and later fought Jonah. Karolina was defeated and taken to the Church of Gibborim's office, where Jonah revealed that he was her biological father. She was rescued by the group, and was forced to go on the run with them as they were accused of murdering Destiny and capturing Molly. 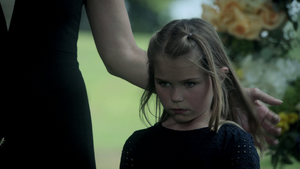 Young Karolina at the funeral of Gene and Alice Hernandez. 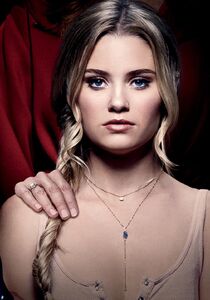 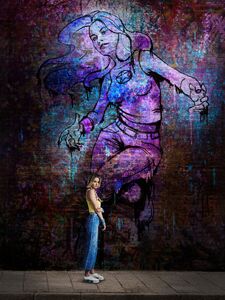 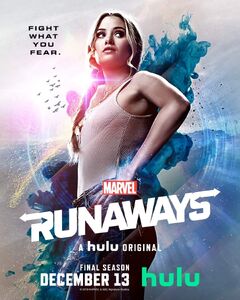 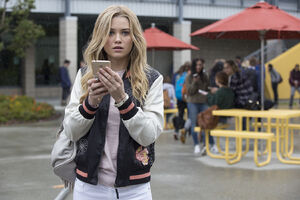 Karolina in season one. 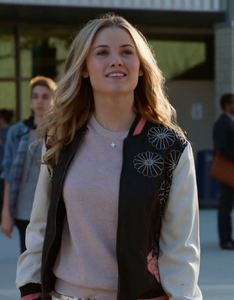 Karolina at the Atlas Academy. 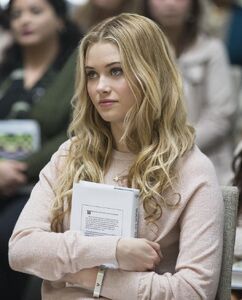 Karolina at the Church of Gibborim. 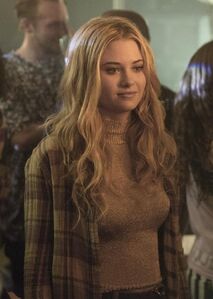 Karolina at the party. 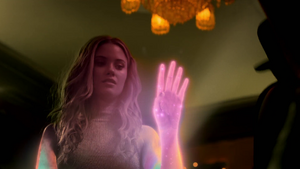 Karolina seeing her hands glow upon removing her bracelet.

Karolina at the Wilder mansion. 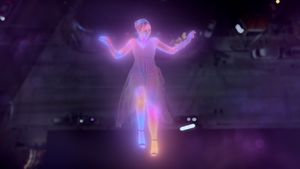 Karolina flying after falling off the roof. 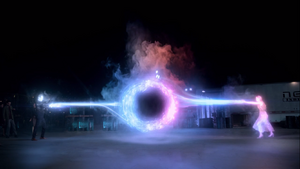 Karolina vs. Jonah and PRIDE on the top of the PRIDE construction site. 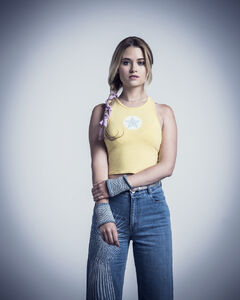 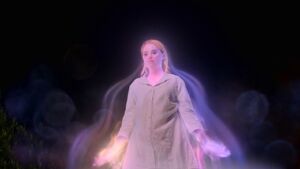 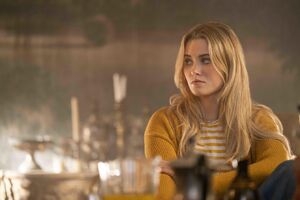 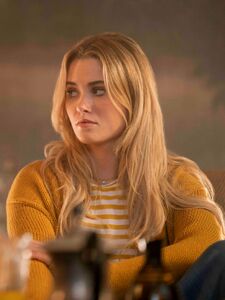 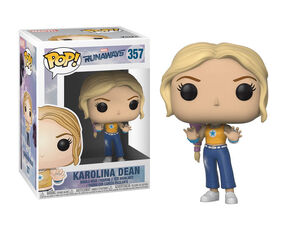