Kassandra (Greek: Κασσανδρα), also known as the Misthios (English: Mercenary), the Eagle-Bearer, the Child of Zeus or West Wind, is the main protagonist in Assassin's Creed: Odyssey. She is voiced by Melissanthi Mahut, and Maria Syrgiannis young.

She was a Spartan mercenary who fought during the Peloponnesian War. She was the older half-sister of Alexios and, through their mother, Myrrine, the granddaughter of King Leonidas of Sparta. While raised by her mother's husband, Nikolaos, she was later revealed to be the biological daughter of Pythagoras himself.

During her exploits as a mercenary, Kassandra came at odds with the secretive Cult of Kosmos, an organization with the intent of controlling all of Greece and beyond.

She was voiced by Melissanthi Mahut.

As a child, Kassandra was presented with the broken Spear of Leonidas, an Isu weapon, as an heirloom by her mother. Because of her prestigious lineage, great hopes were placed upon her to live up to the strength and valor of Leonidas. Her step-father, Nikolaos, would often train her in hopes that she would follow in her footsteps. At some point, the Oracle of Apollo at Delphi gave a prophecy in which Kassandra's younger brother, Alexios (who was a newborn at the time), would lead to the fall of Sparta in the future.

In order to prevent this, Alexios was to be sacrificed at Mount Taygetos, despite Myrrine's plea for Nikolaos to stop it. As a priest was about to drop Alexios, Kassandra attempted to stop the sacrifice, but instead pushed the priest and Alexios to their apparent death. Kassandra was condemned as a traitor to Sparta, leading her step-father to execute her by dropping her off the mountains.

Kassandra, however, survived the fall, and escaped to the beach with the spear. Refusing to be found by the Spartans, Kassandra fled out to the open seas, with an eagle following her. A storm later turned Kassandra's boat overboard and she woke up on the beaches of Kephallonia. There, she was greeted by Markos, who took her under his wing and tasked her to do errands for him.

Life as a misthios

Seventeen years after the incident on the mountain, Kassandra became a well renowned misthios. Thugs would regularly come to her to demand money on behalf of the Cyclops. Kassandra eventually tired of this lifestyle and defeated the thugs that came to her. Before Kassandra continued, she was greeted by Phoibe, an orphan, with whom Kassandra shared a close bond with.

After the two finished talking about eagles, Phoibe told her to meet Markos at his new vineyard and then left leaving Kassandra to deal with the thugs. Coming across Markos in his new vineyard, she was initially angry at his purchase of the vineyard while he still owed her drachmae. Calming her with the promise of more, he directed her to Duris who owed Markos drachmae. Kassandra then took a horse and went off to find Duris.

Before Kassandra could collect her debt, she was informed that Phoibe had been kidnapped and was being held at Kitmene Beach. After making her way to the beach, she stealthily dealt with the three thugs guarding Phoibe. Assured that Phoibe was alright, Kassandra then went to find Duris in order to collect her debt. Heading back to Markos, she catches him in an argument with Drucilla about her stolen lumber shipment. Kassandra then got Drucilla to fix her bow before she went and fixed her stolen lumber problem.

Kassandra eventually obtained the staff of Hermes Trismegistus and became immortal until she passed on the staff to Layla Hassan who in 2018 ventured into the Isu temple at the Caldera of Fate. 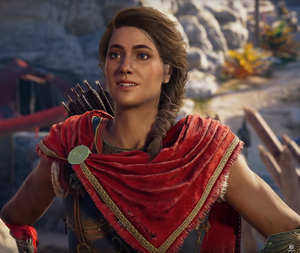 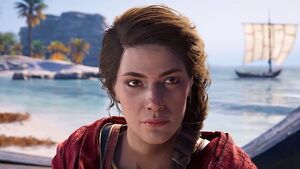 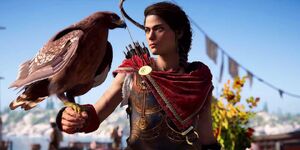 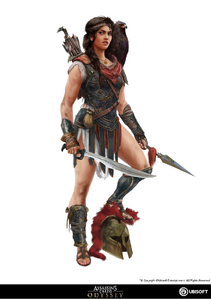 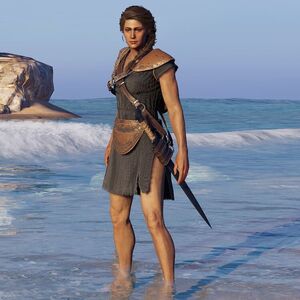 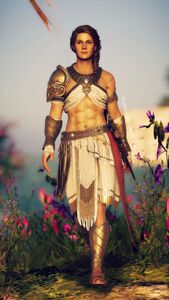 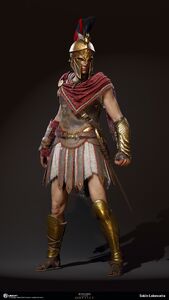 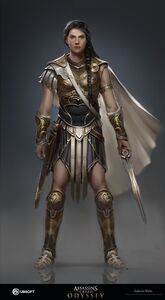 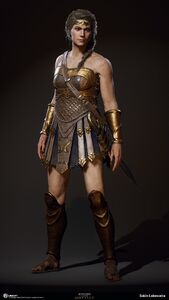 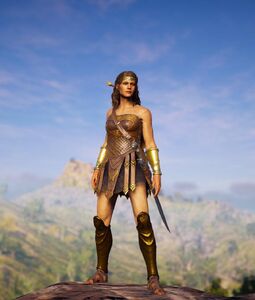 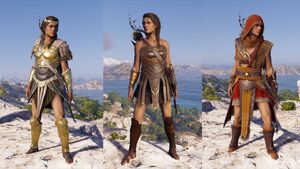 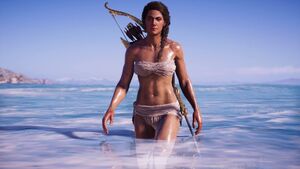 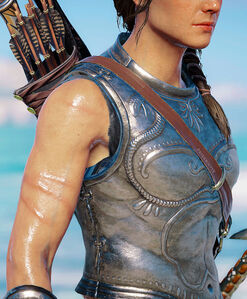