Heroes Wiki
Register
Don't have an account?
Sign In
Advertisement
in: The King of Fighters Heroes, Female, Teenagers,
and 42 more

Help Ryo and his family.
Win the tournament.

Kasumi Todoh is one of the heroes from Art of Fighting and The King of Fighters video game series.

She was voiced by Masae Yumi before she replaced with Rui Tanabe.

Kasumi is the daughter of Ryuhaku Todoh. After her father was defeated in the Art of Fighting and disappeared as well, she went to find Ryo Sakazaki for revenge.

However, her mother Shizuka does not fully agree with this. Kasumi studied Aikido and Kobujutsu from the Aikido School from an early age and was taught to her by her father. As the sole heir to her family, she did her best to stand up for Todoh. When Ryuhaku stayed in South Town and married a man named Takuma Sakazaki, Kasumi stayed at her house, waiting for her father's return. A few months later, she got some bad news: Ryuhaku was defeated by Takuma's son Ryo Sakazaki and has never seen it since.

In retaliation for her father, she decided to fight Ryo and anyone else. Unfortunately, her mother Shizuko didn't like the idea. In the end, she makes peace with him and returns to Japan with her mother.

In the King of Fighters 96 tournament, Kasumi was called the event by King. She greeted and tested her other teammate, Mai Shiranui, through a short martial arts melee. She is very happy to participate in a grand event of a valuable teammate, she became a member of the female team. After she left to find her father, Kasumi clashed with rival waitress Li Xiangfei before the 1999 tournament. By chance, King and Blue Mary stopped their struggle and asked them to be their teammates. She was called a member of Yuri next year and accepted gracefully.

Considering that her father was discovered in the 2000 competition, Kasumi was still unable to arrive until The King of Fighters XI, when Malin contacted her. Once Kasumi reported to him about the hospitalization of Takuma, Eiji Kisaragi was very interested and agreed to be a member of their team. During the entire tournament, the trio formed the anti-Kyokugenryu team and continued to spy on their opponents.

At the end of their team, Kasumi seemed to be more focused on finding her father to beat her opponent, but the three of them were eventually knocked down by an angry King.

Kasumi is loves her family very much and her father was surely missing, she wanted to restore his honor so her family would be together again. She had a relatively sheltered upbringing so she doesn't always know how to react to society's standards.

She's learning English and tries to taunt her fallen opponents after the battle by using a dictionary. At first, she eventually fought with Ryo, believing he cannot speak Japanese then she pulled out her dictionary and tried to speak English, but much for her relief, Ryo tells her that he wants to speak Japanese perfectly while proceeding to challenge him.

While Kasumi does have her rivalry with the Kyokugen practitioners with Ryo being for responsible for her father's disappearance, her wish to find her father seems to take higher priority in the KOF series. 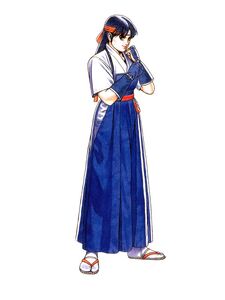 Kasumi in Art of Fighting 3. 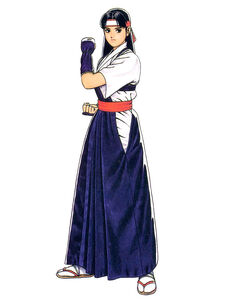 Kasumi in The King of Fighters '96. 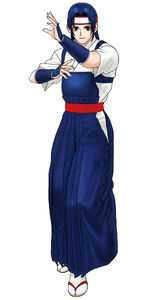 Kasumi in The King of Fighters '98. 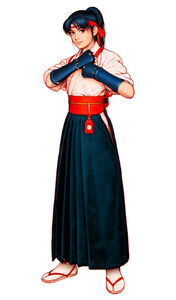 Kasumi in The King of Fighters '99. 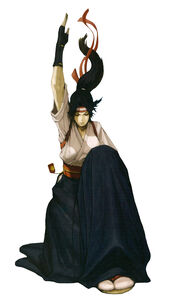