Be Successful at gymnastics, Steal the heart of Takuto Maruki, Accepts herself as Sumire Yoshizawa

Sumire "Kasumi" Yoshizawa is a playable character in Persona 5 Royal. Yoshizawa is a member of the Phantom Thieves of Hearts going under the name Violet, and a first year high school transfer student at Shujin Academy and got a gymnastics scholarship. Yoshizawa was first encountered on a train giving up her seat for an old women but it was later taken by another man. Yoshizawas's first interaction with Ren Ayamiya happened on May 30th on a school trip to clean up a park and would later forge a confidant with him. Later in the game Kasumi Yoshizawa would obtain her persona Cendrillon in a random palace. It would later confirmed that she was actually Sumire Yoshizawa pretending to be her sister because of the trauma she experienced over her death, where Kasumi saved Sumire from an ongoing bus.

She was voiced by Sora Amamiya in the Japanese version, and by Laura Post in the English version.

Yoshizawa is a student with long red hair tied with a red ribbon, red eyes, and pink lips, wearing a Japanese school uniform with suspenders and black pantyhose. Her summer school uniform is modified. She wears a white dress shirt under a beige button-down with vertical lines, white socks with black lining and orange loafers. In mid-winter, "Kasumi" wears a red overcoat, black pantyhose and black high-heeled Mary Jane shoes. For her regular winter outfit, she wears a knit cream-colored sweater with a knee length orange skirt, and black ankle boots. Her summer casual outfit consists of a celeste blouse with black polka dots, white shorts and blue and brown sandals. In the Metaverse, "Violet" wears a black mask with silver highlights and has a black ribbon tied to her ponytail. Her main outfit consists of a strapless black leotard, a chain belt with two silver roses motifs and the scabbard for her rapier attached to it, a black choker and red gloves. Her black bolero jacket has gold buttons, ruffled sleeves and three floor-length coattails. She wears thigh-length hose and stiletto-heels that resemble ballet shoes on the top. Violet's Metaverse outfit remains the same no matter her current attire or mental state in the real world.

Yoshizawa is a cheerful, kind, and friendly person always giving off positive energy and is an extremely talented person being able to perform extremely well at gymnastics and also doing minor things for others like giving an old women a seat on a train and grabbing a flying away balloon for a child who lost it. Despite her positive personality and talent Yoshizawa has her past which involved her sister saving her from a car at the cost of her sisters death which cased her to suffer from depression and survivors guilt. Yoshizawa also had an inferiority complex because of her sister Kasumi being able to pick up what she learned from gymnastics much quicker then she can even though her sister believes in her talents as a gymnast. Despite her past burdens, Sumire Yoshizawa is still a kind hearted and caring person who slowly builds up her confidence as she accepts her self as Sumire. 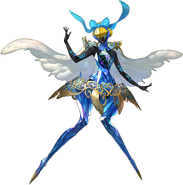