No information
Dr. Katherine "Kat" Manx is an ally character from Power Rangers SPD. She is an alien with cat-like features in charge of all research and design for Ranger technology at SPD's Earth Base.

Kat is the Power Rangers' technical support. She has designed most of the Rangers' weapons and is Commander Cruger's trusted assistant and friend. Her home planet was also attacked by the Troobian Empire, so she joined in S.P.D.'s fight against evil. Kat has also been shown to have great fighting skills. During her battle with Mooney and Krybots, Kat was able to morph once and become Kat Ranger. However, this was only temporary and the Kat Ranger powers were never seen again.

Morphing into the Kat Ranger

Later on in the season, Kat is recruited to S.P.D. Central command under request by Supreme Commander Birdie. She returns to Earth with a temporary morpher and becomes the S.P.D. Kat Ranger to stop an old friend with a grudge. Although her time as a Ranger is limited (her morpher has only enough power for one hour, according to Birdie; whether she used it all up or simply used some of it is unknown), she realizes the Rangers need her skills on Earth.

In the final episode, she and Boom are captured by Broodwing who turns the base into its Megazord configuration. Thanks to R.I.C., the two escape and shut down the Megazord, allowing B-Squad to defeat and capture Broodwing. During the final battle against the invading Troobian forces, Kat, Boom and Omega Ranger led the S.P.D. Cadets in battle to protect the Delta Base. Together they held off the forces long enough for reinforcements led by Commander Birdie and Sergeant Silverback to arrive as well as the Nova Ranger, allowing them to defeat the enemy. During the fight against Omni as the Magnificence, Kat analyzes the enemy and finds its weak spot and gives the information to Cruger and the Rangers who use it to destroy Omni, even though she knows it may cost Cruger his life. Kat is relieved to see that Cruger and his wife survived and watches the final fight between Grumm and Cruger that results in Grumm's capture. Afterwards, Kat remained at S.P.D. Earth Station.

Aside from intelligence, Kat has shown to have a good deal of fighting potential and is able at holding her own in a fight. Despite her youthful appearance and looks, she is 147 human years old. This may be an inverse of how Earth cats age 7 years for every human one, which would put her at about 21 years old.

This form is exclusive to S.P.D. Episode 29. 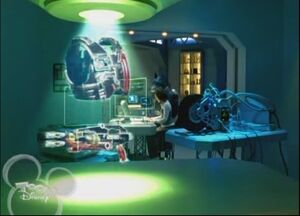 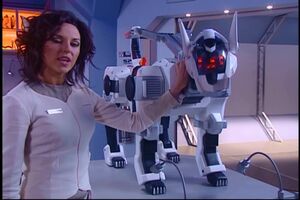 Retrieved from "https://hero.fandom.com/wiki/Kat_Manx?oldid=1818968"
Community content is available under CC-BY-SA unless otherwise noted.