Heroes Wiki
Register
Don't have an account?
Sign In
Advertisement
in: Outdated Articles, Infobox Update, Partners in Training,
and 17 more

Kat and Ana are supporting characters in the WarioWare franchise.

In WarioWare, Inc.: Mega Microgame$, they are voiced by Sara Rades and Leslie Swan.

Kat is a young girl who has a pink hair with a ponytail, she wears a pink scarf, blue oufit, pink shorts and two blue sandals.

Ana is a young girl who has a orange hair with two pigtails, her outfit are the same of the Kat but the colors scheme are inversed.

Kat and Ana are the host of the patchwork minigame in Game & Wario. A bowling pin that has a drawing of kat appears in the bowling minigame.

Kat and Ana appears in Supper Smash Bros. Brawl as assist trophies who make an X on the stage to damage the opponents with their katanas. also appears as collectionable trophies and stickes separated who both said stickes increases the user's slash attacks.

Their dojo makes the spirit who learns their style have a major increase in trow, grab and item powers, move and fal speed, but decreases the attacks and special-move powers, defense and weight. Their spirit battle is against two Sheiks who loves jump on the Suzaku Castle.

Kat and Ana appears in Rhythm Heaven Megamix in the challenge set "Wario... Where?", both appears in the rhythm game "Catchy Tune 2" where consist on Kat and Ana catch the fruits. 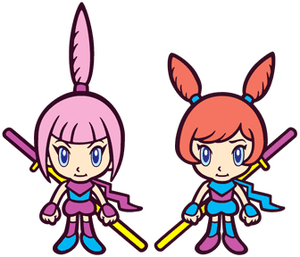 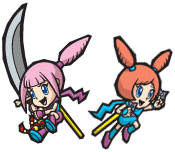 Kat and Ana in WarioWare: Twisted!. 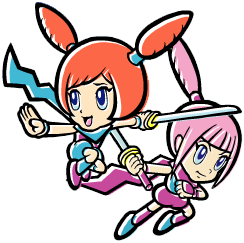 Kat and Ana in WarioWare: Touched!. 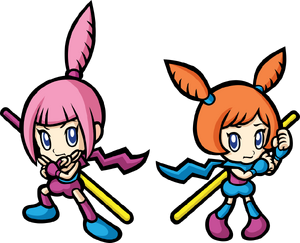 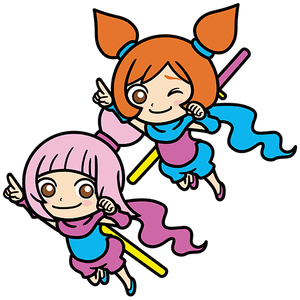 Kat and Ana in WarioWare: Gold. 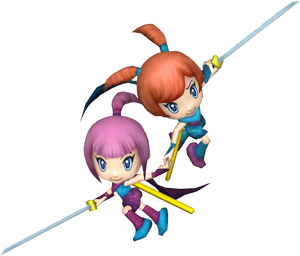