Katana (real name Tatsu Yamashiro, 山城 タツ, Yamashiro Tatsu) is a fictional character and superheroine in the DC comics and its universe.

She was once a Japanese woman who lost her family from her brother-in-law, Takeo Yamashiro, and decided to use her martial arts and abilities to fight against justice. She later became an ally of Batman, and member of the Birds of Prey, the Outsiders, and the Suicide Squad.

Katana is a sword-wielding Japanese super-hero with magical weaponry. Her blade is the Soultaker Sword, a relic that steals the essence of those it slays and stores them inside. It was taken in a duel with the man who killed her family, Takeo Yamashiro. Batman eventually recruited her to become a member of his black-ops team the Outsiders during a mission in Markovia. She has also been a member of the Birds of Prey, the Suicide Squad, and a founding member of the Outsiders.

Tatsu was born at an unknown time in Japan, and became proficient in martial arts and fighting. Two brothers named Maseo and Takeo Yamashiro proclaimed their love for her, and Tatsu chose Maseo despite liking them both. This angered Takeo, who refused to attend their wedding, and became a member of the Yakuza. After the deaths of her parents, Tatsu and Maseo started a family by having twin daughters, Yuki and Reiko. Takeo decided to kill his brother, and used the matched swords, but Tatsu took one of them when he slayed Maseo. During the fight, Takeo accidentally started a fire, which killed Tatsu's daughters.

Tatsu mourned the loss of her family, and decided to begin training as a samurai under master Tadashi, and kept Takeo's sword which would later be called "Soultaker". She graduated from Tadashi's tutorship, and left for the United States where she intended to use her skills to fight against crime. Tatsu decided to take the code name "Katana" after the sword she wielded, and worked on fighting for justice.

Katana journeyed to Markovia, where she tracked down General Karnz, who gave Takeo the two swords, and killed him. After the fight, Katana encountered a girl named Halo, and the two worked together to rescue Batman. Katana and Halo rescued him, and the group worked together to defeat Baron Bedlam, who had captured the vigilante. Katana and Halo later became founding members of the Outsiders, alongside Black Lightning, Geo-Force and Metamorpho. Team managed to stop Baron in Markovia, and moved to Gotham City to set up their headquarters in the underground base of the Wayne Foundation building. Katana became Halo's guardian and the two moved into the penthouse of the same place, and Katana was later kidnapped by the villain Cryonic Man. She was rescued by the team, and Cryonic Man was stopped before he could remove all of her organs.

During this time, Takeo was still at large and followed Tatsu to Gotham City, and secretly switched swords with her. Takeo took the sword to Oyabun, and performed a specific ritual that allowed them to recall the souls that inhabited the sword. Katana realized the sword was taken and fought them, reclaiming the Soultaker and killed Takeo, finally putting an end to some of her ghosts. When the Outsiders split from Batman's leadership, and took residence in Markovia where they became agents of the country. The team later moved to Los Angeles where they made their headquarters in the Markovian embassy, and Katanna later faced a resurrected Oyabun. She was captured by a tengu that was sent by the Oyabun, and was rescued by Halo and Looker. 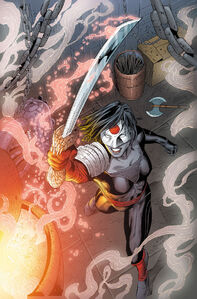 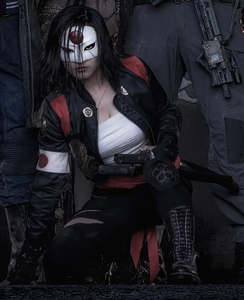 Katana as she appears in Suicide Squad. 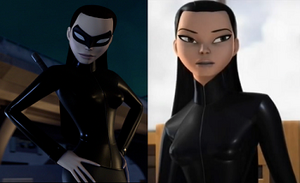 Katana in Beware the Batman. 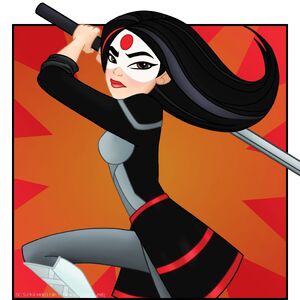 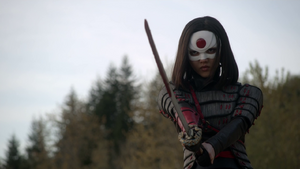 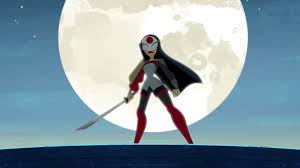