NOTE: This article is about the incarnation of the Kate Bishop version of Hawkeye from the Marvel Cinematic film series. The mainstream version can be found here: Hawkeye (Kate Bishop).

Become a superhero to help people, just like her idol, Hawkeye.

Discover the mystery about Jack, expose her mother's crimes and defeat the Tracksuit Mafia (both succeeded).

Katherine Elizabeth "Kate" Bishop is the deuteragonist of the 2021 Disney+ series, Hawkeye.

She is a young, yet skilled girl who is a fan of Hawkeye, and seeks to become a superheroine like him one day. One day, however, she met with him and became involved in a conspiracy, about the whereabouts of a retired vigilante known as Ronin (who was actually Hawkeye himself) and the murder of a man she met in a party of her mom's.

She is portrayed by Hailee Steinfeld (who also played Mattie Ross in True Grit, Charlie Watson in Bumblebee, and voiced Gwen Stacy in Spider-Man: Into the Spider-Verse and Vi in Arcane), and by Clara Stack as a child.

Katherine Elizabeth "Kate" Bishop was born in 2002 to Derek and Eleanor Bishop, coming from a wealthy family that lived in New York. In May of 2012, Kate witnessed the Chitauri invasion led by Loki, and Bishop was saved from one of the aliens by Hawkeye. She was deeply touched by Hawkeye's heroism, and started to idolize him as one of her favoirte superheroes. While attending her father's funeral, Kate became inspired by Hawkeye to become a superhero, telling her mother that she would protect them and that she also needed a bow and arrows. During her school years, Kate focused on training herself in archery and martial arts in case another invasion would happen, and earned numerous medals and a black belt by the time she was fifteen.

In 2018, Kate survived the decimation caused by Thanos but it's unknown if her mother was a victim of the snap, but all victims of the snap would be revived by the Hulk in 2023. Afterward, Bishop would graduate from high school and started to attend college while also continuing her training.

When she was a young adult in 2024, she made a bet with her college friends about what part of the bell moved to make the sound, and used a arrow to make the bell rings (the tower of the ciry's bell), but the tower the bell was in ruptured and fell. Her friends ran away, leaving to Kate the consequences

While her mother became irritated with the assunt, she decided to leave this aside, and asked Kate to appear in the party she was going to do. Kate went, and met Armand the Third, uncle of Jack, a man who was, unknownling to Kate, the groom of her mother. When she went to the lower side of the mansion, she heard Armand shouting to her mother, in what looked like a threat. She was mistaken by a waiter, and then she got to a clandestin auction that was happening in the basement of her mother's mansion. The auction was about very valluable itens, most of them found in the rest of the Avenger's complex. One of the itens was Ronin's suit, along Ronin's sword.

While Kate was fascinated with this, the Tracksuit Mafia, a organized crime group, invaded the auction, looking for a watch. Kate got Ronin's suit for herself, while Ronin's sword was taken by Jack, who was attendin at the auction along with Armand. Kate took down some of the Mafia's goons, and got out of the Auction. She saved a dog, that was fighting with one of the Mafia's operatives, and took him to her house. She later went to Armand's house, breaking in with Ronin's suit, just to discover Armand, laying in the ground, dead. She ran away from the house as fast as possible, but was intercepted by the Tracksuit Mafia, who had scores to be settled with ROnin, but she was saved by Clint Barton, the Hawkeye, that was trying to retrieve the suit that was once his, but when discovered Kate was girl, took her to her house, and settled the whole story with her.

While she discussed what to do with Hawkeye, the Mafia attacked and burnt her house, but Kate ran, along with the dog and Clint thay hid in Kate's aunt's house, and then Hawkeye asked Kate to go to her mothe's house, where it was safer. She did so, as she was going to have a dinner with her mother's groom. She then asked to do a sparring of fencing, as Jack was a fan of blades. While she won most rounds, she though he was letting her win, and fatally attacked him in the face, to make him defend himself like a professional. The plan did well, but mother didn't like it, but Kate's suspections that Jack was the one who killed Armand just grew stronger.

Hawkeye went out to settle things with the Tracksuit Mafia, and was purposefully captured to retrieve information, but before he could do his plan, Kate fell from the ceilling, as she was trying to save him. However, they both were captured by the Mafia, and Echo, leader of it, tried to interrogate them about Ronin. Clint escaped, and later helped Kate scape, but they were pursued by the Tracksuit Mafia. With the help of many special arrows from Clint, and then fixed Hawkeye's hearing device, that was broken during the fight. They broke in Kate's mother's house, to find information about the Tracksuit Mafia in the criminal database of her mother, but Hawkeye was threatened by Jack with the Ronin sword, before the episode ends.

Kate is determined, observative, curious and excited. She, due to being a fan of superheroes, espically Hawkeye, is a very justice guided person, who dreams to become a superhero one day, not to gain money or fame, but to help people. Due to her inexperience, however, she can be sloppy and rurried, and this can conpromise her skills and abilities. Despite that, she always tries to increase herself as person, and with Hawkeye's help, she became a professional superhero. She ia also very determined and harshly gives up, as when she tried effortlessly to find a way to discover who killed Armand the Third. Due to her inexeperience, she can be frightened by some overly tense situations, but always calm down, and is an overall brave and corageous person. 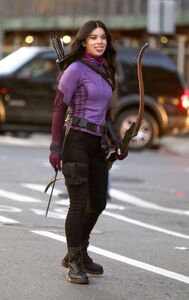