The World
The Magician
Zombies

In 2003, Kate, a newcomer AMS agent, was assigned as James Taylor's partner.

While gathering intelligence at the agency's European branch office, an earthquake trapped them inside. Discovering swarms of zombies on the security cameras, Kate and James escaped to the sewers.

Battling the four-armed Justice and The Lovers, a pair of mutated tarantulas, the AMS agents discovered a eminent nuclear missile launch. They took a subway train to the surface, killing The Empress, a chainsaw-wielding assassin. Both were unsure of the outbreak's source, though James suspected that events of the "2000 Goldman Case" hadn't yet ended.

After defeating the hulking Temperance on the undead-infested streets and discovering the city of Venice, Italy in ruins, deceased businessman Caleb Goldman began an hour-long countdown to the missile launch via a message on James' PDA. Racing to Goldman's headquarters, Kate and James defeated The Star, but James was wounded; Kate supported him as they reached Goldman's office, successfully stopping the missiles.

Claiming that he merely wanted to revert humans to their "original state" with the missile launch, Goldman unleashed The World, an insect-like humanoid meant to succeed his Emperor project and rule humanity. The creature grew larger and powerful with each defeat; James set his PDA to self-destruct, and, telling Kate not to "give up hope", sacrifices himself to destroy The World in the resulting explosion.

The House of the Dead 4: Special

Kate, now alone and saddened by James' absence, teams with AMS agent "G" to fight the outbreak back to its source. After killing a revived Justice, the pair discover an underground facility and battle the Magician. After defeating him, "G" tells Kate that "the fight is starting" and the two leave.

House of the Dead: Scarlet Dawn

Kate will return as a protagonist, alongside James' brother Ryan Taylor

In "The House of the Dead 4" and "Special", Kate has long blonde hair with a shade of light brown color. She wears a red blazer, a black long sleeve sweater, a white-gold scarf, a black skirt, black long stockings, and black boots. In "The House of the Dead EX", she wears the same outfit from 4, but now has a darker colored scarf, and her lower part of the blazer has a darker color

In "House of the Dead: Scarlet Dawn", Kate has her long blonde hair in a bun hairstyle with bangs. She wears a red long sleeve dress with see-through floral pattern on her back, a butterfly shaped pendant, and black high heels. She also wears a plain white long sleeve dress in a cutscene. Kate is also noticeably more curvaceous, particularly in regards to her bust.

Despite being a new member of the AMS, Kate is portrayed as capable of handling situations people would normally be afraid of. She is not afraid to speak her mind, as she is shown usually commenting on how dangerous her situation is or how disgusting the monsters she encounters are; yet she struggles to understand the circumstances she is in and what the word "hope" really means, indicating that she still has a lot to learn as an agent. It is implied that she is interested in fashion.

James' death had a strong impact on her character; she becomes more independent. She is still confused about what she's gotten herself into even after everything she's been through, but nonetheless, she displays a large amount of courage and optimism as the story progresses. She also shows a more flirtatious personality in the Special as she rhetorically asked a zombie if it wanted her so badly as it was attacking her. 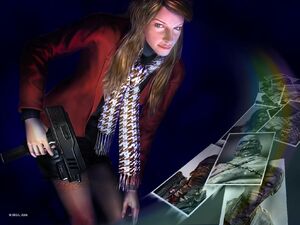 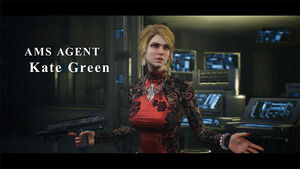 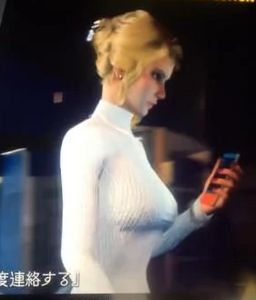 Retrieved from "https://hero.fandom.com/wiki/Kate_Green?oldid=1690981"
Community content is available under CC-BY-SA unless otherwise noted.