Find her cousin, Bruce
Stop her sister Beth/Alice from destroying Gotham and save her from her insanity

Kate is the maternal cousin of Bruce Wayne, who was secretly Batman. After surviving a car crash that killed her mother and presumably her twin sister, Beth, Kate attended military school where she was eventually kicked out after coming out as a lesbian. Kate spent five years traveling around the world, learning combat and survival skills before returning to Gotham City where Batman had mysteriously disappeared.

Once returning to Gotham City, Kate discovered her cousin's secret identity and took up his mantle of being Gotham's protector; secretly operating as a vigilante known as Batwoman.

Kate Kane is portrayed by Ruby Rose in the first season and by Gracyn Shinyei as a young girl.

Kate was born in January 1990 to Jacob and Gabi Kane, along with her twin sister, Beth, growing up, Kate was very close to her cousin Bruce Wayne, who was like an older brother to her, when she and Beth were little, they once visited Wayne Enterprises, where Kate convinced Beth to sneak into Bruce's office, Kate noticed a woman's necklace in a square pyramid-shaped glass container. She was about to touch it, when Beth stopped and convinced her to leave the office immediately. On Fridays, after school, Kate and Beth would go to a waffle and eat chocolate-covered waffles.

In January 2003, Kate and Beth were in a car driven by their mother on their way home from their Bat Mitzvah when they were rammed by a school bus hijacked by the Joker, the family's car veered off of the road, almost going over a bridge until it was stopped when Batman arrived and attached a grappling hook each to the bridge and to the car, believing the car was safe, he immediately left to save the children on the bus from the Joker, the pillar of the bridge slowly began to give way.

Kate quickly climbed out of the car, shouting for Batman and asking why he was leaving so suddenly, Beth tried to wake their mother, to no avail. Kate reached out for Beth's hand, but it was too late, and the bridge's pillar gave, plunging into the cliff's river below. Due to these events, Kate started believing Batman only cared about catching the villain.

The tragedy left Kate and her father, Jacob broken, though Bruce comforted Kate through her healing process, sometime during Beth's disappearance, Kate had a nightmare, and Jacob hugged her tightly, even though she had a bed, she slept in the living room in case Beth called, she then made her father promise they'll never stop looking for Beth. After the search for Beth had expanded to Bludhaven, Jacob received a call from someone who claimed to be Beth, but the call was cut short. Jacob traced the call and traveled with Kate to its location.

While Jacob checks upstairs, Kate goes down into the basement. Kate notices a mysterious door inside the basement and approaches it. She calls out Beth's name, but hears no response. Unbeknownst to Kate, Beth actually was inside, but was threatened by the owner of the house that he would kill anybody she spoke to. Thinking that Beth wasn't there, she and Jacob left the house.

Sometime later, Jacob brings Kate waffles, but Kate doesn't want to eat them, she says that they should instead be looking for Beth, however, her father points out that they've been looking for months and deserve a break, however, Kate tells her dad she feels like this was all her fault because Beth went to check on their mom, but instead of helping, Kate climbed out, she feels like she could have tried harder to save her sister, but was scared that if she stepped too far, she'd fall down too.

Later, Jacob tucks a blanket over a sleeping Kate and sees a map of the area where the car went off the bridge, and the places they have already checked for Beth. Jacob breaks into tears and walks away with it, he crumbles it just as he sees Kate is awake once more and is seeing him crying, Jacob calls her over and holds her tightly, he tells her that investigators found skull fragments on a nearby farm and had them tested, and they belong to Beth, Kate correctly doesn't believe it, as she had already checked the farm on multiple occasions and calls Jacob a traitor for giving up before walking away. At some point, her father married Catherine Hamilton, and Kate met her step-sister, Mary Hamilton.

Kate is fearless, passionate and reckless, her fearless and passionate traits also makes her blind to reality; for example, a week before Kate could graduates from Point Rock Academy, she and then-girlfriend, Sophie Moore got caught violating the academy's strict code of conduct against homosexuality, she was given a choice, deny the homosexual allegations against her or get expelled, Kate believed that because she was the academy's top cadet (along with Sophie) she would not get expelled by the tribunal, as she refused to deny the allegations against her; regarding her sexuality. Unfortunately, Kate finds out the hard way that she was wrong; as she was ultimately expelled from Point Rock Academy.

As Batwoman, Kate is very stoic and committed to helping Gotham City.   Her personality is similar to Sara Lance and Alex Danvers.   Even though she shares the similarities like Bruce, but I don't think so.  She also shares the same similarities to Dinah Drake and Emiko Queen.  Both of them were loners and not willing work with teams in the beginning. 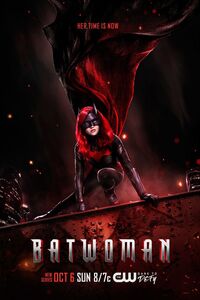 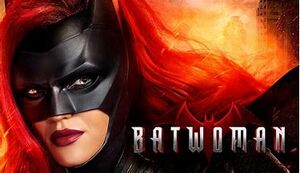 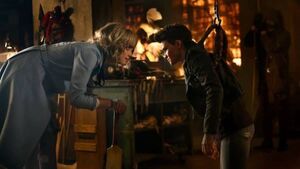 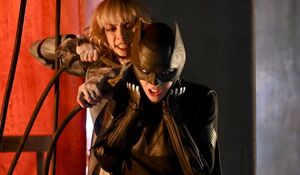 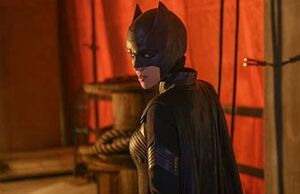 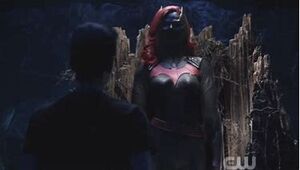 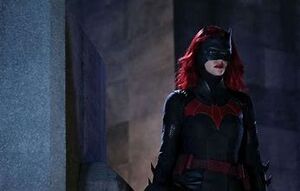 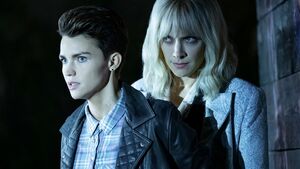 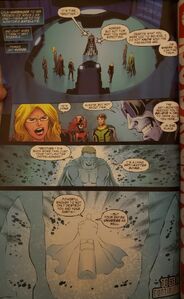 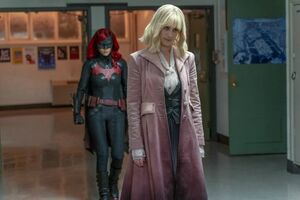 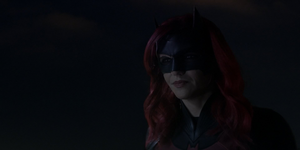 Retrieved from "https://hero.fandom.com/wiki/Kate_Kane_(Arrowverse)?oldid=2074477"
Community content is available under CC-BY-SA unless otherwise noted.