Playing Mega Man
Hanging out with her father

To find Zombrex
To survive

Katey makes an appearance in Dead Rising: Road to Fortune. She is at the age of 4 during the comic series and Case Zero. Katey is briefly seen in the end of the first issue of the comic series going to Las Vegas with her mom and dad. She tells her father that she knows what he could with the money he earns. Her father replies by asking her what but she does not respond. Her father happily agrees with her, then promises that their trip to LA will change their lives forever, which it does but not in the way he planned.

Katey appears in Dead Rising 2: Case Zero as the deuteragonist. She's first seen sleeping in her father's truck sleeping using his jacket as a blanket. Her dad goes to gas up his truck. While he's doing that he checks his watch and realizes it's time to give Katey Zombrex (a medicine that stalls the zombification process). When he goes to give it to her she wakes up and tells him no but he replies and says that nobody likes shots but she has to take it and then gives it to her. He takes her into the gas station and then tells her to stay inside. When he goes outside he observes the place a bit. Then an unknown man runs behind him but her dad doesn't notice the man at first until his truck is stolen by him. He chases after it but fails to get it back. He drops to the ground very mad. Then Katey comes out of the gas station and tells him that there's a man behind him. When he looks to see who it is he realizes it's a zombie. He picks up Katey and heads back to the gas station and barricades the door. He has her wait where she's at while he looks for more Zombrex. He goes out another door to go get some. He eventually finds some and a broken bike and takes back to the gas station. He goes and gets the parts afterwards then gives Katey Zombrex. She then asks him why her mother bit her. He replies and says it wasn't her, just someone who looked like her. Then a crazy mechanic walks up behind them. Her dad notices him and tells him sorry saying they didn't know it was there place. The mechanic notices him giver Zombrex making want to kill her and make into a trophy. Her father tells her to run and fights the mechanic. After he kills the mechanic him and Katey leave Las Vegas and go to Fortune City.

Katey returns in Dead Rising 2 as one of the two tritagonists she had in Case Zero. Katey is first seen sitting on her father's slicecycle. Her dad is fixing up the bike a bit and when he tries to find his wrench he can't find it until Katey hands it to him revealing she had it the whole time. Then a man walks up behind him saying he needs to sign a release form before he goes and competes in the game show Terror is Reality. He signs it and asks him if he can take to a safe place and he replies and says he'll take her to the green room. After he's done competing in the game show he goes to get Katey but sees that the zombies have gotten loose. He fights his way to the green room and gets Katey. The two escape the arena but only to find a zombie outbreak happening in Fortune City. They make their way to a safe house but when they enter a security guard named Raymond Sullivan notices the bite mark on Katey's arm. Her dad tell him he has Zombrex. He replies and says he better have a lot because he won't be able to get more in 3 days because that's how long it will take for the military to arrive. He then tells him to take to the security room since its quieter in there. When he goes to give it to her he sees it's all empty. She asks where he's going to get it. He replies and says to let him worry about it. Then a woman name Stacey Forsythe tells him he gets some in a mini market in the Royal Flush Plaza. He leaves the safe house through a vent, then goes to get some. He finds some and gives it to her. Later on he gets more. On the second time he gives it to her Katey says sorry to him. He asks why she's sorry and she says it's because of all the stuff he has to do to get it. On the third time he gives it to her she says she doesn't feel good and faints. Chuck gets worried but Stacey says it's just a side effect of the medicine (which it is). On the fourth and final time he gives it to her, he takes her PSP out of her hand and she says she didn't let her save and that she's going to have to restart. He says it's time for her dose. After he gives it to her he gives her PSP back. Later on the safe house gets breached and her dad says for everyone in the security room to stay where the are. Katey takes cover under the couch in the room. Her dad goes and builds a generator to close the gate and succeeds on closing the gate. Then he comes back in the security room saying he got most of them. He tells Katey it's safe again and gets off under the couch. It's later revealed Raymond Sullivan caused the outbreak. Her dad goes and defeats him before he could escape. Later Chuck (Katey's dad), Katey, and Stacey escape Fortune City.

Before the outbreak a man named Nick Ramos meets her. She steals one of the cars at the Wrench O' Rama. Nick meets with other people and then her again in a diner.

Katey returns in Dead Rising 3 using her middle name Annie. She serves as the deuteragonist and a love interest for Nick. She is first seen in the start of the game at the diner. She decides to leave the diner and go on her own Nick meets her again. Later on Nick comes across her former boyfriend Red. He asks if he's a friend or enemy, and Annie (or Katey) tells him she knows him and that he's a friend. Nick meets with Isabela Keyes. Then Red betrays the group, and Nick fights and defeats him. Near the end of the game her father Chuck Greene arrives and the two are reunited. They all get on the plane and leave but Nick stops the plane to go stop General Hemlock. After he defeats Hemlock Katey contacts him on a transceiver saying that they're gonna pick him up. She then says to him "I can't lose you". Nick replies and says he can't lose her either. 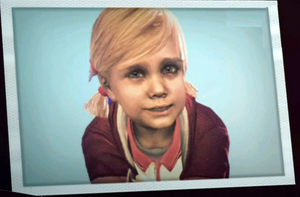 A picture of Katey in Dead Rising 2: Case Zero. 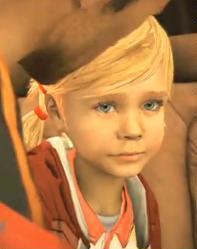 Katey aka Annie in Dead Rising 3.
Add a photo to this gallery

Retrieved from "https://hero.fandom.com/wiki/Katey_Greene?oldid=1862235"
Community content is available under CC-BY-SA unless otherwise noted.