Save humanity from the machines

Spouse, Fighter, In love Heroine, Seeker of Vengeance, The Messiah

Katherine "Kate" Connor (née Brewster) is the deuteragonist of Terminator 3: Rise of the Machines and a major character of Terminator Salvation. She's the love interest and later wife of John Connor.

Kate grew up before the war, and went to middle school with John Connor. The day before John met the Terminator, he and Katherine were each other's first kiss.

Kate is the only daughter of Lieutenant General Robert Brewster, the military director of CRSAutonomous Weapons Division. Kate's mother divorced her husband and left them when she was still in college. After graduation, Kate went on to become a veterinarian, working at the Emery Animal Hospital, and became engaged to Scott Mason.

In 2004, she is attacked by a T-X sent from the future to kill her and thus prevent John Connor from having children. Connor and a reprogrammed 850 Series Terminator save her life, but Scott is killed. Connor and the Terminator tell her about the future, in which the Skynet system that her father helped create takes over the world and enslaves humanity, and the three of them set off to stop her father from activating Skynet. Before they can get to him, he is killed by the T-X.

Getting to the Crystal Peak Control and Command Center, a hardened fallout shelter facility in the Sierra Nevada Mountains for VIPs, Kate and John are able to survive Judgment Day just before the nuclear apocalypse occurs. Using the communications equipment within the facility, Kate helps John get in touch with survivors and co-ordinate a Resistance force.

During the war, Kate marries John and became Kate Connor. She is one of the two medics in Connor's unit prior to his promotion to be one of the Resistance leaders. She begs John to appoint her a field medic, but he refuses, reasoning that is too dangerous. She defies him and goes along with Barnes' squad during a battle to capture one of Skynet's facilities, the battle that would lead to John's promotion. Shortly before the battle, Kate realizes that she is pregnant with John's child.

Kate is a high-ranking member of the staff of John's Resistance Base in 2018 and serves as one of the Base's Doctors. While treating a patient named Marcus Wright, she discovers that he is a Terminator. She conducts an examination of the machine and reports to Blair Williams that John had decided to dismantle Wright rather than let him live. She also tries to reassure John that his father, Kyle Reese, would be fine despite being a target of the machines.

When John decides to launch a rescue mission, she initially tries to talk him out of it, but eventually relents. After the destruction of Resistance Headquarters by Skynet, Kate leads the rescue mission for John, who is seriously injured during the rescue. Kate orders Blair to land the helicopter on a safe spot and ask the surgeon team to stand by. Later, she performs heart transplant surgery on John with the help of Marcus, who give his heart to save John's life. 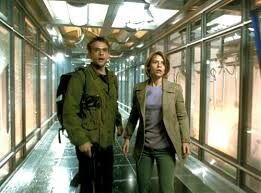