Defeat all supervillains.
Save Angel Grove from evil threats.

Katherine Hillard Oliver (simply known as Kat) is one of the major protagonists in Mighty Morphin Power Rangers, Power Rangers Zeo, and the 1st half of Turbo. She is a former servant of Rita Repulsa and one of Tommy Oliver's love interests and later his wife. She is also the mother of J.J. Oliver.

She is portrayed by Catherine Sutherland.

Katherine started serving Rita Repulsa for her evil bidding who is transformed into a cat. Aisha and Kimberly named her "P.C." when they thought she was a stray cat. But later on, she is become a cat monster, but the form was destroyed by Ninjor and Ninja Megafalconzord. Katherine is turned back between her cat and human form. Although she was in her human form, Katherine is quite stole the Kimberly's power coin and then sneaked into Falconzord and stole it after knocking Tommy down. But because of her kind heart, Katherine will soon get rid of the spell. When she broke free, she was near Angel Grove's Gym & Juice Bar, and Kimberly trained inside the Pan-Global Games. When she came in, she saw Kimberly, still tired in the last few battles, trying to stay focused on the balance beam. she eventually lost her balance and fell to the floor.

Katherine feeling guilty for part of her responsibilities because she was involved in Rita's plan and take Kimberly to the hospital. When Tommy and Billy, who were visiting Kimberly, were called to help Rocky, Adam, and Aisha, Katherine visited Kimberly and admitted what she did while being influenced by the spells of Rita, but she known about Kimberly and her friends are the Power Rangers, especially when Tommy tells her about the experience influenced by Rita. Rita and Zedd sent Garbage Man to capture Katherine and broke their dream to destroy new friends with her. But when the Garbage Man failed, Zedd and Rita gave the Rangers the final pass: either they gave up Katherine, or their ally Ninjor would be sent to the bottom of the Sea of Sorrow. The Rangers experienced with the deal and met Rita, Rito, Goldar, and Tengas, but they were found to contain Ninjor's containers empty, because of the Ranger's plan B, they activated a shield to protect Katherine from evil.

However, Katherine was kidnapped by Rito into a dungeon as Rita and Zedd waited for the Sea of Sorrow's high tide, Rito had a sore neck, stood guard and allowed Katherine to massage the neck before falling asleep. When Katherine got the key from him and got out she noticed a box in which Rito told her that it was Kimberly's pink power coin. Once she got it, she was transferred to the Command Center and was able to give the coin back to Kimberly. After successfully completing the Pan-Global Trials and having the opportunity to participate in the Pan-Global Games, Kimberly went to Pan Globals with the support of her friends and decided to withdraw from the team and pass her coin to Katherine because she become a new Pink Ranger.

During her time as a Ranger, Katherine will fight against various villains. At first it was Rita Repulsa and Lord Zedd. But that was a very short time. Soon after, a new villain - Master Vile - came to look for Zeo Crystal, which was hidden in the deceitful cave under Lord Zedd's Lunar Palace. Katherine has a plan on how to claim Zeo Crystal without anyone else in Zedd's Palace, and distracts Rita and Zedd from the evil side, but makes sure she is loyal to her proposal, Zedd and Rita imprisoned her into a chamber, and when it reached its full powers, it would permanently return Katherine to evil. Fortunately, Tommy found Zeo Crystal in the "Deception Cave" and used it to release Kat from Zedd's prison. 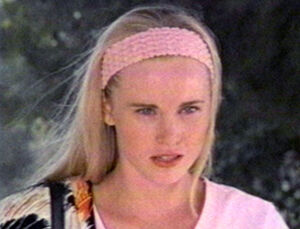 Kat, while still under Rita's spell. 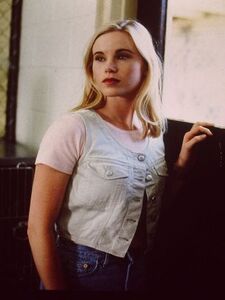 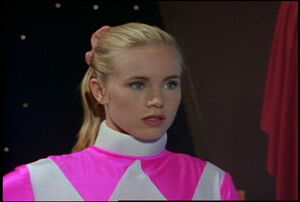 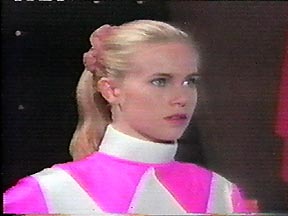 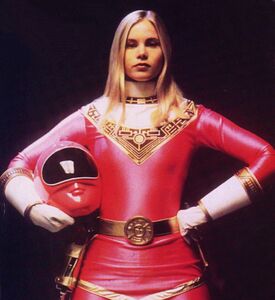 Kat as Zeo Ranger I - Pink. 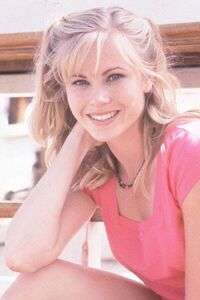 Kat in Turbo: A Power Rangers Movie.
Add a photo to this gallery

Retrieved from "https://hero.fandom.com/wiki/Katherine_Hillard?oldid=1577040"
Community content is available under CC-BY-SA unless otherwise noted.