Combat with a lightsaber

To construct her Lightsaber. (succeeded)

To become a Jedi.

During that conflict, she underwent the ancient Jedi ritual of The Gathering, where she explored the Crystal Cave of Ilum to seek out her lightsaber crystal. Inexperien

A Force-sensitive near-Human of Tholothian blood, Katooni was trained in the ways of the Force at the Coruscant Jedi Temple. Like other Jedi of Tholothian decent, Katooni donned a traditional headdress of dangling seedpods recovered from the planet Tholoth. When the Clone Wars erupted between the Galactic Republic and the Confederacy of Independent Systems, the Order's members were forced to serve in the Grand Army of the Republic. As the war was waged across the galaxy, Katooni was deemed to be one of the top members of her clan and suitable to travel to the sacred Jedi world of Ilum to participate in the ancient ritual known as The Gathering.Escorted to Ilum by Padawan Ahsoka Tano, Katooni and other Initiates entered the hidden Crystal Caves and met with Grand Master Yoda inside the caves.

Katooni and other Initiates entered into the caves in search of their crystals for use in their personal lightsabers, Katooni accompanied her fellow Initiate Zatt as they searched deep into the labyrinthine caves. Coming across a massive cliff, Katooni found her crystal lays at the peak of the frozen wall of ice, Zatt then departed from Katooni to find his crystal. Climbing up the rock face, Katooni retrieved the crystal and found a passage way at the top of the cliff. Choosing to take the path rather then climb back down, Katooni rushed into the passage way. While Katooni rushed her way out, she fell through a weak patch of ice. Trapped in a frozen chamber near the mouth of the caves, Katooni called for help and saw Petro on the other side. Asking him for assistance, Petro, however, refused to help as his time was almost up and he had yet to find his crystal. Alone and fearful of freezing to death, Katooni gave into despair and wept. As the gates were almost frozen over, Petro realized his error and returned to Katooni and gave her the courage needed to escape the ice cave and made her way back out of the caves to the applause of her friends. As the younglings retrieved their crystals, At outside of the caves, Master Yoda commended Katooni in having confidence and other younglings as well.

After the Gathering successful, Tano prepared to escort them back to Coruscant. While the Crucible departed into a deep space, Katooni and other younglings continued their training under the direction of Professor Huyang: the expert tutelage of the Jedi's prime lightsaber designer and engineer. Huyang showed the younglings the countless models of lightsabers and asked them to visualize their models. While Katooni and other younglings begun the construction of their Lightsabers, Hondo Ohnaka and his pirates attacked the Crucible to steal the younglings' crystals so that Ohnaka could convert them into easy profit on the black market. After the pirates finally boarded the Crucible, Huyang ordered the younglings to hand over their crystals to him for safekeeping but Petro, however, didn't hand his over. Katooni and the others then hid in the ventilation shaft where Tano ordered Ganodi and Zatt to make their way to the cockpit, find R2-D2, and secure the ship's bridge. Katooni, Byph, Petro and Gungi would follow Huyang and seal themselves in the ship's hold and await Tano's command. Tano would intended to reroute the ship's power to the engines so the Crucible could break free of the pirate ship's grip.

Ohnaka then ordered the pirates to smoke the Younglings out of the ventilation shaft and secure the crystals, and soon Katooni and her fellows started coughing as gas grenades filled the ventilation shafts with choking smoke. Huyang lifted the floor panel to emerge in a corridor, and he was immediately throttled by a pirate. The pirates then demanded that the captive younglings hand over their crystals. Petro then pulled out his Lightsaber, opened its crystal chamber, and inserted his shard but Katooni warned him that his lightsaber would explodes. However, he ignited his blade, looking to fight, but the gleaming blue shaft faded out. The pirates chuckled and snatched the lightsaber, but Petro's lightsaber exploded in the pirate's grip. The younglings and Huyang dashed away from the stunned pirates. Huyang instructed them to continue to the hold, he had been damaged in the explosion and couldn't aid the Katooni and her fellow younglings in battle.

Later in the training room, Katooni and Gungi set the training remotes to their highest power settings and programmed them for defense. Running from two pirates, Byph lured the pirates into the room. Katooni called Zatt to seal the room from the bridge. The remotes swarmed the Weequays, relentlessly zapping them. Unfortunately, Katooni and her fellows couldn't make it to the hold. Ohnaka and his pirates stood in the way, the younglings were surrounded by pirates. Ohnaka demanded the young Jedi to hand over the crystals. Suddenly, Tano arrived. She Force-pushed most the pirates out of the way, allowing Katooni and her fellows to get to the hold. They managed to drive the pirates from the ship, however, Tano was captured by Ohnaka. So the younglings were alone and stranded.

After Ohnaka's raid on the Crucible, the younglings called for help, and Katooni was able to contacts Jedi Master Obi-Wan Kenobi. Kenobi hailed the younglings and promised to send Commander Cody to pick up the stranded and alone younglings. However, Kenobi suffered a surprise attack by General Grievous and Kenobi would be eventually defeated. In the meanwhile, Katooni and the younglings continued their guidance of building their lightsabers aboard the ship but only Katooni couldn't finish her lightsaber. When Petro wanted to disobey Kenobi's advice and rescue Tano by the younglings themselves, Katooni was not in favor of the plan, but when it appeared that the ship's coolant was leaking, the younglings had to travel to Florrum. While leaving R2-D2 to repair Huyang and Ganodi to watch the ship, Katooni went with the group and were able to persuade themselves by joining Preigo's Traveling World of Wonder, a circus act led by Preigo as an acrobats. Then during the show, Katooni stole Tano's Lightsabers from a drunk Ohnaka. While Ohnaka was still drunk, Tano and the younglings were able to escape aboard a WLO-5 speeder tank and headed back to the Crucible.

Katooni and her fellows were eventually recaptured by Gwarm and his pirates but when Grievous arrived on the planet, Tano persuaded the pirates to release her and the younglings so that they could rescue Ohnaka. While breaking Ohnaka out of his cell, Katooni managed to complete her lightsaber with an encouragement from Huyang and Ohnaka. When they fled to get Ohnaka's private fleet of ships, Katooni traveled with the pirates[9] aboard Starhawk speeder bike. As Ohnaka was planning to abandon Tano and the other Jedi, Katooni pointed out that they had all trusted him and Ohnaka agreed to help them escape from Grievous.

Taking the Slave I, which Ohnaka had retrieved after it has been crashed, Ohnaka waited until the other Jedi were all on board so that they wouldn't get caught in the blasts and then fired upon General Grievous and quickly left the planet as the Armored Assault Tanks arrives. After returning the Jedi to Kenobi's ship and reuniting with Obi-Wan Kenobi, Ohnaka pretended that the entire thing had been a rescue mission from the start. Just before he left Katooni caught his eye. Ohnaka gave her a small smile and a nod of appreciation, showing that she had earned his respect. After the pirates left, Kenobi formally welcomed the younglings into the Jedi Order. Later, Katooni and her fellow would eventually returned to the Jedi Temple.

Later in c. 20 BBY, Katooni and her fellows younglings were present at the Jedi Temple and training under Jedi Master Tera Sinube. When it was revealed that Barriss Offee was the one behind the Bombing of the Jedi Temple Hangar and death of Letta Turmond by blame Tano, Skywalker dueled Offee to the training ground where Katooni and her fellows were training. Offee would eventually be defeated.

A shy and timid girl, Katooni's confidence increased after her success in getting her lightsaber crystal. However she had difficulty putting her lightsaber together; eventually it was Ohnaka who managed to encourage her to complete it. Although Ohnaka had captured and even threatened to kill the younglings, Katooni realized that he wasn't all bad and managed to persuade him to repay his debt to the Jedi. She was the only member of the group, apart from Tano, whom the pirate seemed to actually respect. Although she was a Jedi, Katooni was not always able to hide her emotions and was full of fear and despair when she was trapped in the ice cave, afraid that she would freeze to death.

Katooni was a young Jedi Initiate and one of the top in her class. She has been shown to be able to use telekinesis as shown when building her Lightsaber and when she was trapped in the ice cave though she needed Petro's help to break it. She is also capable with her lightsaber being able to destroy several battle droids. 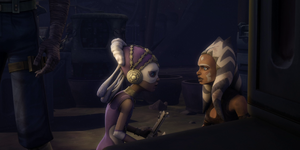 Katooni frees Ahsoka Tano from Hondo Ohnaka and his pirates.

Katooni and Petro work together to take down several battle droids