Katopesra (カトペスラ Katopesura) is a character introduced in the saga of the Tournament of Power in Dragon Ball Super. He is a member of the team belonging to Universe 3 of the god of destruction Mosco. He also is a Policeman with a great sense of duty which has the responsibility to enforce justice in the Universe 3.

Katopesra is a modified warrior like his teammates in Universe 3. However, he does not seem to have robotic implants in his body but uses a suit that gives him special powers. Under the suit is an elderly humanoid, has blond hair and skin is blue, also has been seen wearing dark sunglasses. His suit is mostly white with boots and orange gloves, plus blue stripes for the shoulders, arms, back and legs.

These blue stripes change color when the suit changes mode, as it is capable of transforming as desired. In a transformation you can see that the stripes turn yellow, purple or red. It also has a helmet protecting its head, the back is covered with a large crystal and the top has a small antenna that protrudes. Finally, in his chest and belt appears the letter that corresponds and represents the way in which his suit is.

Katopesra seems to be calculative and fairly strategic, as shown when he, along with Viara, created and executed a somewhat elaborate plan to ambush Jiren. He seems to have a strong sense of justice, similar to the Pride Troopers from Universe 11 as he wanted to fight and defeat Frieza several times, despite how easily Frieza defeated him during their earlier encounter, but he only wanted to fight him in his Whirlwind Speed Mode. This shows that he knew his regular mode was weaker than Frieza. He also seems to be very courageous, as shown when he confronted Frieza when he was rampaging through the arena and shooting ki blasts everywhere, which made Dyspo to lose will to fight. He seems to be merciless and cold at times, as shown when he told Android 17 that there is no mercy in war, who was asking him why he would hit a girl.

He appears to be very boastful, energetically explaining what each of his suit's modes can do and believes that he is unbeatable in his "Ultimate" mode. He is shown to get flustered whenever someone interrupts his explanations. 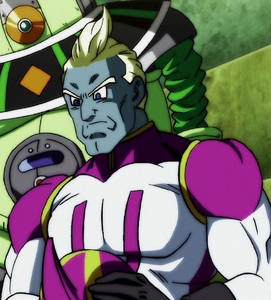 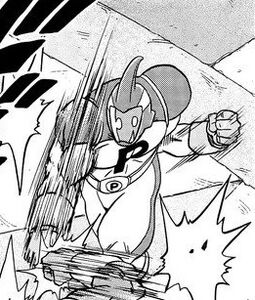 Katopesra in the manga
Add a photo to this gallery

Retrieved from "https://hero.fandom.com/wiki/Katopesla?oldid=1691458"
Community content is available under CC-BY-SA unless otherwise noted.