Katori (香取?) was the lead ship of the Katori class of three light cruisers which served with the Imperial Japanese Navy during World War II. It is named after the noted Shinto Katori Shrine in Chiba prefecture, Japan.

She has light brown or silver hair tied into a folded ponytail with parted bangs. She has blue or green eyes. She wears a double-breasted white jacket with gold epaulettes over a white collared shirt and black necktie up top combined with a gray skirt, and pantyhose below.

Her combat gear involves a backpack-like rig holding up a smokestack and two twin-cannon turrets, as well as a bridge carried on a strap like a purse. Her shoes in this mode are armored high-heeled sandals.

She is personified around the role of a teacher, carrying a pointer, (or riding crop for some artists,) and prominently wearing glasses. She talks in a mature, maternal, gentle, but also somewhat flirty tone. 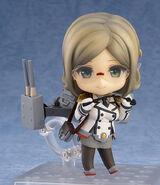 Add a photo to this gallery
Retrieved from "https://hero.fandom.com/wiki/Katori?oldid=1580363"
Community content is available under CC-BY-SA unless otherwise noted.