Being with Brom Bones.

To make Brom Bones propose to her by making him jealous of her "relationship" with Ichabod (succeeded).

Katrina Van Tassel (simply known as Katrina) is the female protagonist from Disney's 1949 short The Legend of Sleepy Hollow, the 2nd half of the film the Adventures of Ichabod and Mr. Toad.

Due to Katrina being the daughter of old Baltus Van Tassel, the richest farmer in the county, she is treated like a princess by everyone in Sleepy Hollow. She is a very feminine and cheerful young woman, albeit oblivious to the fawning attitude of everyone around her.

Katrina is described as "Plump as a partridge". She is a beautiful young woman who has a strawberry-blonde hair, blue eyes, fair skin, pink lips, rosy cheeks, thin black eyebrows and matching eyelashes.

The Legend of Sleepy Hollow

In the film, Katrina Van Tassel attracts many of the young men in Sleepy Hollow who offer to do anything for her like setting up her picnic for her or carry her groceries home for her. She meets Ichabod Crane, who falls in love with her, but so does his rival, Brom Bones. There is a competition between Ichabod and Brom Bones over Katrina, in which Brom Bones tries to prevent Ichabod from being with Katrina, but he always fails. Later, Katrina dances with Ichabod and when Brom Bones steals her from Ichabod, she dances with Brom. She is last seen when in her wedding, when she gets married to Brom Bones, who is now her husband.

Katrina makes a cameo appearance as one of the guests in the TV series House of Mouse. 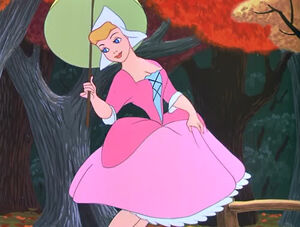 Katrina in The Adventures of Ichabod and Mr. Toad

Katrina marrying Brom Bones
Add a photo to this gallery

Retrieved from "https://hero.fandom.com/wiki/Katrina_Van_Tassel?oldid=1719105"
Community content is available under CC-BY-SA unless otherwise noted.