To join Star Fox to be closer to Falco

Katt Monroe is a female feline from the Star Fox series. Like Falco Lombardi, she seems cocky, but in a feminine way, such as joking that she would never fly with him again. Katt has a past history as Falco's colleague, but it has never been revealed what they used to do, save that they were both in the Hot Rodders and they have never been romantically involved. Katt Monroe is not an official member of the Star Fox team, but she'll lend a blaster when it suits her, secretly wanting to join just so she can fly close to Falco.

Katt harbors a deep resentment and hostility towards Andross and his forces for having her original ship captured and demolished, so she steals one of the enemy ships to call her own, naming it the Catspaw. She appeared to help the Star Fox team deal with searchlights and several enemies in the severely polluted planet Zoness. Falco seems annoyed by her involvement, demanding to know what she's doing, with Katt replying to him if that's anyway to greet a girl. She tends to flirt with Fox, (who does not react to her sweet talking) in order to get Falco to acknowledge her. If the player had visited Zoness, Katt will reappear in either Macbeth or Sector Z depending on whether they destroyed all the searchlights or not. Even if they got all the searchlights, the player can choose to go to Macbeth anyway and see her again. She will also be seen in the end credits, flying alongside Falco.

Four years after the war concluded, Katt sends a distress call and Falco happened to receive it and departed for Titania to assist her, without official permission from the Star Fox team. She and the Hot Rodders were saved from a Goras called Golas when Falco forcibly makes it flee the brawl. Katt warns Falco that Captain Shears is on to them and seeks to bring disaster that is yet to be known by them. Katt brought up the subject that she had fallen for someone else, though it is unknown if it was someone else, or it's still Falco). Not long after, Captain Shears had the Star Fox Team fooled into thinking that the Hot-Rodder group is actually an Androssian rebel ship; upon locating the ships, it leads to a dogfight between Fox and Falco, with the former besting the latter.

After the fight, Katt scolds Fox for shooting down his own comrade. Fox expresses surprise that she was driving "Andross's ship," but Katt clears up the misunderstanding, stating that they weren't looking for Andross. It was then that Fox realizes that the Hot-Rodders had been taking leaked data about the project. ROB 64 analyzed the files and unveiled the information that the basis of the project in question is not about constructing weapons based on Andross's research, but to actually revive Andross. It was then that ROB reports on Slippy's capture by the research team, so they issued a head-on assault on the base; with Fox going in to save Slippy, and possibly stop Andross's revival, while the Hot-Rodders create a distraction to help him make it through.

While doing their part, they were attacked by a Goras and Katt thought about taking it out herself after recalling Falco's last words to her after leaving the Hot-Rodders gang. But Falco, in his newly repaired Arwing, arrived to save them from the beast and this time puts it out of commission forever. He then saw that Cool may be the person that Katt fell for, as he saved her from being crushed by what remained of Goras and accepted this. After that, Falco resolved to fly solo for a time being, and asked Fox to persuade Katt to leave the Hot-Rodders, as for her to stay out of harm's way in the future. Katt looks on as Falco takes his leave in his Arwing, as Cool puts his arm around her, with Katt's message going by: "Falco... thank you."

Several years after the Lylat Wars, Katt makes a reappearance to help the recently disbanded Star Fox Team stop the invading Anglars, and had customized her ship into the Catspaw ll. She now has a dark gray shade of fur instead of her usual pink. Depending on the paths the players take and the situation she's in; Katt will either persuade Falco to form his own team and joins with him and Dash Bowman, or she will fight alongside Lucy, Krystal, and Amanda and prepare a celebration feast to welcome the returning Star Fox Team home after the Anglar Emperor's defeat. However, it's highly likely that all of the endings and possibly the game itself is non canon. 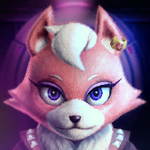