Help Shang-Chi stop his father and the Ten Rings from destroying Ta Lo.

Defeat the Dweller-in-Darkness (both succeeded).

Katy Chen, born as Chen Ruiwen, is the tritagonist of the 2021 Marvel Cinematic Universe film, Shang-Chi and the Legend of the Ten Rings. She is a former hotel valet and Shang-Chi's best friend who is unaware of his past, but becomes entangled in it amidst his quest to stop the Ten Rings.

She is portrayed by Awkwafina, who also portrays Goh Peik Lin in Crazy Rich Asians and Ming Fleetfoot in Jumanji: The Next Level and voices Quail in Storks, Courtney in The Angry Birds Movie 2, Otto in The SpongeBob Movie: Sponge on the Run, Sisu in Raya and the Last Dragon, and Ms. Tarantula in The Bad Guys.

Chen Ruiwen was born to an unnamed father and Mrs. Chen, and is the sister to Ruihua Chen. Sometime before the events of Shang-Chi and the Legend of the Ten Rings, she (going by the English name "Katy") would then met Shang-Chi (going by the Irish name "Shaun"), when the latter enrolled in school, and the two would later become best-friends. The two survived the decimation in 2018 that was caused by Thanos, and later graduated from high school as Katy went on to Berkley University. She eventually graduated from the university before the events of the film, and decided to get a job as a valet worker in San Francisco with Shang-Chi.

While traveling around San Francisco through a bus, the bus was hijacked by two assailants that attempted to kill Shaun until he revealed his martial arts skills. Katy questions Shaun on his true identity, and he reveals that he was trained by his father to become an assassin when he was just a child, and tells her that he needs to travel to Macau since his sister sent him a letter. The two travel to the Golden Daggers Club where they witnessed an underground fight between Wong and the Abomination, and Katy later sees Shang-Chi fight his sister after he was recognized in the club. When the Ten Rings arrive to capture Shang-Chi and Xialing, Katy is saved by Xialing, but the two are captured by the Mandarin.

Being sent to the Ten Rings' compound in China, Shang-Chi and Xialing's father explains his intention to break the seal of Ta-Lo since he believes his late wife is trapped there. When Shang-Chi and Xialing disagree with their father's beliefs, he sends them and Katy into a cell as he travels to Ta-Lo. The trio meet Trevor Slattery, an actor who once impersonated the Mandarin, and manage to escape from their cells with the assistance of the dijiang Morris. Traveling to Ta-Lo, Katy meets Shang-Chi and Xialing's aunt Ying Nan, and learns that she is an excellent archer by Guang Bo. Katy participates in the fight against the Ten Rings, and later battles the Soul Eaters after they were unleashed by Wenwu. She helps defeat Dweller-In-Darkness by shooting an arrow into its neck when it tries to kill the Great Protector, leading the evil creature's defeat.

After attending a memorial for those lost in the battle, Katy and Shang-Chi return to San Francisco as Xialing decides to stay and become the new leader of the Ten Rings. While having dinner with their friends, they are interrupted by Wong, who asks them to travel to the New York Sanctum with him to do research on Wenwu's ten rings. Katy and Shang-Chi meet the former Avengers Bruce Banner and Carol Danvers, and learn from Wong that the rings are emitting a signal to someone or something. After Banner and Danvers end their conversation, Katy, Shang-Chi and Wong go out to sing karaoke together.

Katy is feisty, reckless, something foul-mouthed and loves to have fun in slightly questionable ways, such as going for high-speed joyrides in fast cars, despite not being a very good driver. She also loves karaoke, often bringing along Shang-Chi. She is also very loyal and brave, helping to defeat the Dweller-in-Darkness by shooting it in the neck with her dragon scale arrow.

In the beginning, Katy was satisfied with the life she had with Shang-Chi and her family as she didn't see herself doing anything else for herself. Also, Katy didn’t like her job valeting cars. However, during her adventure with Shang-Chi, Katy discovered that she had a natural talent for archery and found more about herself. Katy accepted her new life as a hero alongside Shang-Chi and has come to terms that the life she once had wouldn't be the same anymore. 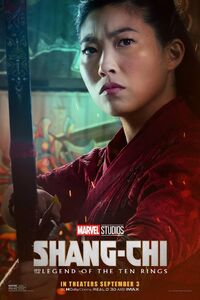