Kawamatsu the Kappa is one of the major characters of One Piece Wano Country Arc. He is a Japanese puffer fishman who is one of Kozuki Oden's retainers. When the Oden's castle burning down, he saved princess Kozuki Hiyori and jumped into the river to survive and hide from Kaido and Orochi before he was captured and locked up in Udon until freed by Luffy and his fellow retainers.

He is voiced by Yū Mizushima and Yūta Kasuya as a young in the Japanese version.

Kawamatsu has undying loyalty to the Kozuki Clan and fellow retainers as he will never submit himself into the likes of his enemies such as Kaido and Orochi even when Orochi force feed him a poison fish everyday. He is respectful for Luffy when he spat a bone from a poison fish that he eaten to one of the guards. He entrusted Luffy to protect Hyogoro as they need him.

As a fishman, Kawamatsu is 10 times stronger than humans.

Kawamatsu is renowned to be known as Kappa-Ryu which he holds tremendous talents in his swordsmanship.

Kawamatsu has a strong will as he will never submit himself to the likes of his enemies such as Kaido and Orochi even when fed him a poison fish by Orochi everyday after captured him 13 years ago. He is determined to still be loyal to the Nine Red Scabbards after suffering a great loss to both Kaido and Orochi, getting separated from Kozuki Hiyori, and being kept in solitary confinement for 13 years. He is determined to stick by his allies and to trust that they can help him and Wano Country.

Kawamatsu has a good talent of marksmanship and great accuracy when he spat a bone from the poisoned fish he ate to one of the guards in Udon that attempted to attack Luffy. 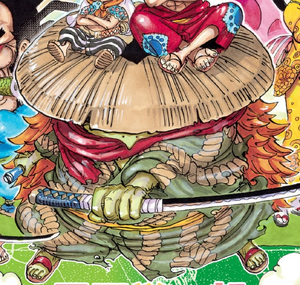