Kaya is a female character in the anime and manga series One Piece. She is living on the largest mansion in Syrup Village in the Gecko Islands. She is becoming a doctor and she is the close friend and love interest of Usopp.

She is voiced by Mariko Kōda in Japanese and Chio Su-Ping (Odex), Tara Sands (4Kids) and Carrie Savage (Funimation) in English.

Kaya is the young woman who has a wide brown eyes and pale-skinned girl with blonde hair, sorted of lighter shade.

She wears a light blue long dress clothing such as a skirt and jacket. She also wears a light green and dark orange dress with light yellow jacket, and her light brown cowboy boots.

Kaya is the sickly young girl who despite herself into depression and sickness. It turns out rather sensitive and against violence, she was just terrified when he attacking Kuro. When Kaya gets angry who thought Usopp tries to ruined the butler's reputation; when Kuro revealed brutally insulted her memories, she starting to cry into tears.

Kaya is caring take care of the people, who was pulling the trigger on her gun and was willing to kill herself to protect children.

As she refused to hard of life to becomes a doctor, working healthy life and carefree and very trusting towards others.

Kaya's concept art from the anime.

Kaya's color scheme in the manga.

Kaya in One Piece Bounty Rush. 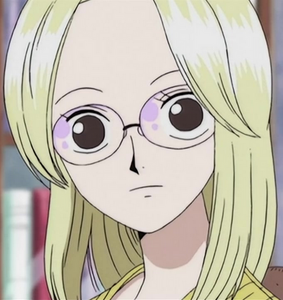 Kaya shown with glasses in the anime. 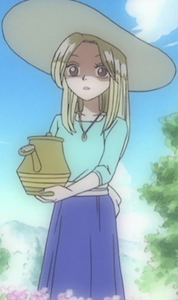