Take down Chuu Hachikawa.
Protect her friends (both succeeded).

Kaya Irimi is a waitress working at Anteiku. She was the leader Black Dog of The Black Dobers, a ghoul gang known for wearing Doberman-like black masks.

Kaya is a waitress at Anteiku who is much older than Touka. She has long, dark hair with long, parted locks in the front. Irimi dresses fairly casually. Irimi seems to be a rather solemn and taciturn woman at first glance.

In the past, Irimi's hair was considerably shorter.

She normally keeps to herself and is quiet and reserved, but she has also been shown to be kind towards Touka and Hinami. Like Koma, she has been with Yoshimura long before they were employees to Anteiku.

A decade prior to the series, Irimi was the leader of a violent gang of Ghouls known as the Black Dobers. A rival of Devil Ape, their gangs clashed and she was also involved in killing many associates of Chuu Hachikawa. After meeting Yoshimura, she gave up her violent past and became a waitress at Anteiku.

Kaya went along with Yoshimura and Hinami to Aogiri's hideout. While there, she was in charge of logistics and deduced the numbers of each force and the side that was winning so far.

She emerged to defend Anteiku as The Black Dog, leading a group of ghouls named the Black Dobers[1] who once occupied the 20th Ward. She nearly died in the fight, but was saved by Kaneki. However, Arima may have killed her, while she tried to escape through route V14.

Like Enji she possessed a deep loyalty to her employer as he gave her the chance to redeem her past actions.

She and Enji appeared to be on good terms, often being seen together and during the Anteiku raid, wondering whether the other was dead.

She acted as an elder sister figure to Touka.

Like Touka, Irimi acted like a elder sister figure to Hinami. During the Aogiri Arc, Irimi taught Hinami how to focus her hearing.

Being Yoshimura's subordinate along with Koma and Yomo implies that she has a vast experience as a ghoul. During the Aogiri arc, she is incharge of logistics and reconnaissance by determining enemy movements during admist a battle. Not only is she capable of telling the number of participants, but she can deduce who they are and how the battle flows based on solely sound vibrations.

As an SS class ghoul, Irimi is a more-than formidable combatant.

She is an ukaku-type user her kagune takes the form of two beetle like wings with a tail between them, although not much has been seen of her kagune she appeared to use a spinning motion to attack with it and in the anime she was able to keep up a constant barrage of projectiles. She is also extremely agile, dodging attacks from Chuu Hachikawa's squad with little effort. 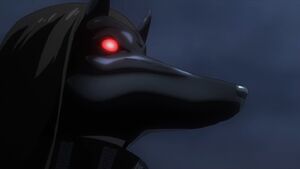 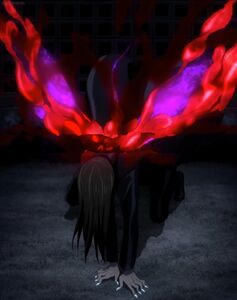 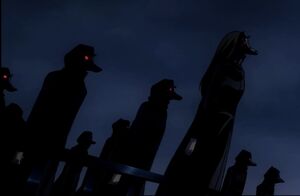 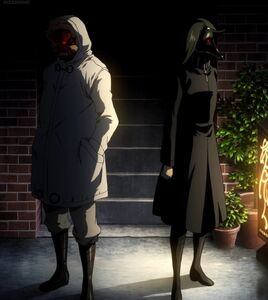 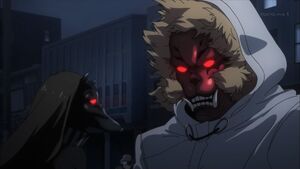