Superhero Doctor, Fire Superhero
Kazimieras "Kaz" is a main character in the series, Mighty Med. He is portrayed by Bradley Steven Perry. He is a character in the Lab Rats and Mighty Med spin-off, Lab Rats: Elite Force. with his best friend Skylar Storm and Oliver.

Kaz, along with Oliver, was a comic book nerd who enjoyed reading about superheroes. Kaz and Oliver have been best friends since preschool, and they're always there for each other. Most likely to be voted as “class clown“, Kaz may be reckless and impulsive, but at the end of the day, he’ll always put friendship first. An accident at a comic book shop led them to go to the hospital, which led them to discover Mighty Med (and thus superheroes) by accident. There he (along with Oliver) became the first normo employee at Mighty Med Hospital. It was there that they met Skylar Storm and other superheroes whom they befriended. He and Oliver tried to restore Skylar's powers, and in doing so, they fought against The Annihilator, an evil mutant who stole Skylar's powers and later turned her evil. They traveled to Caldera, met Hapax the Elder and saved Skylar from the Annihilator's evil by having her powers drained. Kaz's troubles didn't end there. He and Oliver discovered bionic superhumans, beings similar to superheroes and met Donald Davenport and the Lab Rats. He later came across Oliver's mother, also known as Mr. Terror, a ruthless villain who sought absolute power in a bid to rule the world. In a failed attempt to stop Oliver's mother, Kaz (along with Oliver) gained superpowers after absorbing the Arcturion's energy. He and Oliver used their new powers to defeat Bridget/Mr. Terror.

After Mighty Med was destroyed, Kaz, along with Oliver and Skylar went to Davenport to help them track the villains. Soon after, reuniting with their friends Bree and Chase.

Kaz is a laid-back guy who, unlike Oliver, doesn't think before his actions. He is outgoing, fun to be around and brave. When Kaz first started working at Mighty Med, Horace wasn't as sure on hiring Kaz as he was for Oliver. However, with some mistakes along the way, he can be just as trustworthy and a great employee. His favorite superhero is Tecton and when he is brought to the hospital Kaz tries to fix him but accidentally leaves a hole in his stomach. He knew that it was all his fault that Tecton wasn't healing, Kaz can eventually admit to being wrong.

He is best friends with Oliver and have each others' back and when they argue they both learn to forgive each other because they wouldn't know what to do without one another.

In I, Normo, it is shown that Kaz can sometimes be selfish and not care about other people's feelings, but he can sincerely apologize to them without any hard feelings. In some aspects, Kaz can be jealous towards Oliver, especially when things are involved around his crush, Stefanie. Kaz has a problem with authority therefore he can't always make right decisions and he can be very competitive even about the smallest things like being taller than Oliver and being more competitive than him.

In the most serious of situations, Kaz becomes more rational and logical. When Skylar turned evil, Kaz would remind Oliver to move past his personal feelings for her, telling him that saving the world comes first, even if it means taking her down. Kaz is also willing to sacrifice himself for others which shows that he is growing as a person.

Oliver, Kaz, and Skylar have used various of Mighty Med Equipment , superhero and supervillain objects, and use a lot of his own weapons. In Elite force he pick up some Davenport equipment. 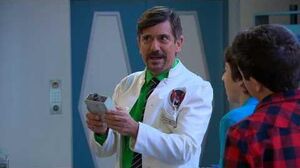 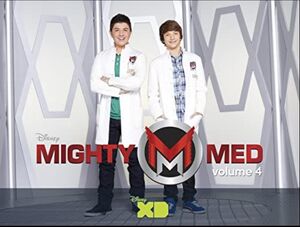 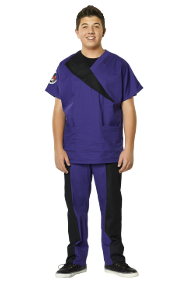 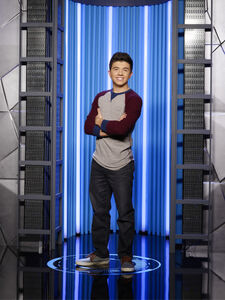 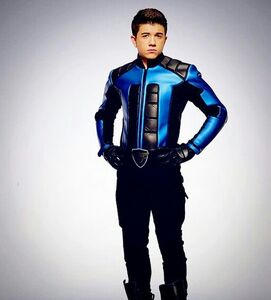 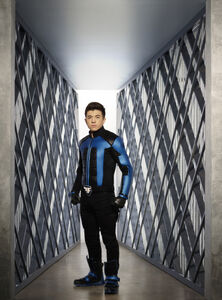 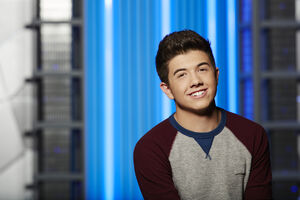 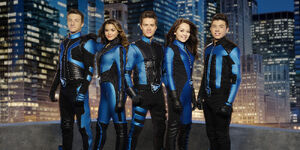 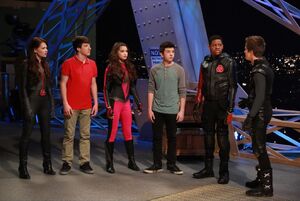 Retrieved from "https://hero.fandom.com/wiki/Kaz_(Mighty_Med)?oldid=2284273"
Community content is available under CC-BY-SA unless otherwise noted.