Kazari Uiharu (初春 飾利 Uiharu Kazari) is a character in the A Certain Magical Index series. While she is a minor character at first, she gets more screen time in A Certain Scientific Railgun where she serves as one of two tritagonists of the series (alongside Ruiko Saten). She is a member of the student police organization Judgment and is the analyst officer of the 177th Branch Office where she works at. She is a Level 1 esper in Academy City and the classmate and best friend of Ruiko Saten.

Kazari is a small girl who sports short black hair and has golden-brown eyes. She has thick eyebrows, but her most striking feature is her headband made out of artificial flowers. In the manga, she often wears a facemask, because she is easily afflicted by colds and flu.

Kazari is usually a shy and humble girl, but always friendly. She is also shown as an equally high-spirited girl as is her friend Ruiko Saten. She admits that she is composed most of the time because of a so-called "limit" she places on herself. Without that limit, she is very energetic and can be airheaded at times as well, as shown during Tokiwadai Dormitory's Festival. Moreover, she is intrigued and interested in the Ojou-sama lifestyle, as shown with her trying to impress Kuroko with her tea making abilities, as well the above mentioned excitability of her person during the Tokiwadai Midsummer Festival. Although she is incapable of normal combat like Kuroko, she still has a strong sense of justice, being a member of Judgment, and will do her utmost to do her duty.

Apparently, she is an animal lover, as she was the only one of her friends that wasn't scared of Ekatrina, Kongou Mitsuko's pet boa constrictor, and even played with it.

Her vulnerability to flu is not shown in the anime version of Railgun, though this later disappeared in later chapters of the manga. The running gag on her not managing to eat her sweets ended in the Railgun anime as well.

Her ability is Thermal Hand (lit. "Fixed Temperature Preservation"), which allows her to conserve part of the objects temperature she touches, and is registered as a Level 1 esper.

She is also very talented on the computer, as she can hack into almost all of Academy City's systems with ease. In fact, her main job in Judgement is working on the computer and use it to support the other members, such as picking up info on trouble makers. This more than makes up for her weak esper ability and lack of physical strength.

Uiharu had created a security system that is one of the 10 strongest systems of Academy City, which earned her a great reputation (and many challenges that led to the arrests of many skilled hackers) in the hacker's community under the alias of Goalkeeper. However, for some reason, the Academy City's Board of Directors did not trust in her abilities and didn't put her in charge of the public system, which created an odd situation that the Judgement's Office where she works has had stronger defenses than the databanks that holds all of Academy City’s data.

Along with Kazari, she is able to memorize an entire manual on how to pilot a giant mecha in a single night and actually be able to apply it in battle. This is exemplified by Ruiko and Kazari easily defeating two mobile weapons. 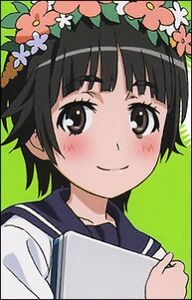 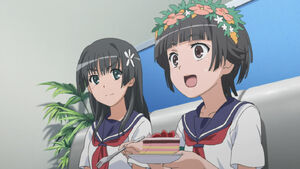