Build up MSF as a business (succeeded).

Kazuhira Miller, also known as Kaz and McDonnell Benedict Miller, is a supporting character from the Metal Gear series.

Born to a American Allied officer and a Japanese prostitute, Miller was born and raised in Japan by his mother as his father returned to the United States. He offered support to Big Boss in Metal Gear Solid: Peace Walker, Metal Gear Solid V: Ground Zeroes and The Phantom Pain, probably becoming his best ally. However, after learning of Big Boss's descent into villainy, Miller turns on him, vowing to aid in his downfall. Later, chronologically speaking, in Metal Gear 2: Solid Snake he aids the Boss's son, Solid Snake in destroying Zanzibar Land. He seemingly returns as an ally in Metal Gear Solid, until the truth comes out.

He is voiced by Robin Atkin Downes, who also played Tenzin in Uncharted 2, and voiced Minh Young Kim in the Gears of War series, Michael Becket in FEAR 3, Travis Touchdown in the No More Heroes series, and Cham Syndulla in Star Wars: The Clone Wars and Star Wars Rebels. In Japanese, he is voiced by Tomokazu Sugita, who also voiced Gintoki Sakata in Gintama.

Kazuhira was born in 1946, Yokosuka, Japan to an American GHQ officer named Miller and an unnamed Japanese mother, and has an unnamed paternal half-brother. Kaz's father met his mother during the country's occupation by the Untied States military, and she was a prostitute that Mr. Miller treated as a wife. Kaz's father had to return to the United States, and couldn't obtain Japanese citizenship, but gave Kaz's mother some money before he left, and she used it to set a shop to sell items such as cigarettes to occupied soldiers.

Kaz was often mocked by Japanese children for his Western appearance, and identified himself more with the United States as they had won the Second World War. When Kaz was ten years old, his mother became ill, and he had to run the shop by himself, and stumbled across a picture of his father. He began to show the picture to American soldiers, one of them told him that his father's name is Colonel Miller, who had retired from active duty and became a military instructor. Kaz became determined to go to America and to meet his father, and eventually sent a letter to him, requesting to travel to meet him.

When making it to the United States to get an education and meet his father, Kaz discovered that he had a half-brother, but he recently died in the Vietnam War, causing his father to enter a state of depression. Kaz then took his father's surname, and was supplied with money to enroll at an Ivy League school, and later graduated with a college degree. While in the United States, he witnessed the rise of the anti-Vietnam protest, and returned to Japan to find that his mother wasn't angry that he left her behind. However, she had forgotten who Kaz was, as her mind was affected by the disease she contracted during her time as a prostitute.

Kaz later joined the Japan Self-Defense Forces, as he wanted to pay for his mother's hospital bills, and to get a taste for the battlefield. However, his life on the force wasn't as glamorous as he hoped, and didn't reach a high rank due to his superiors fearing his skills, and he longed for a more active battlefield than what life in Japan offered. By 1970, the Temple of the Golden Pavilion author Yuko Mishima's lost and committed suicide, Kaz decided to leave the JSDF.

After his mother's death, Kaz left Japan and began to drift around the world as a mercenary and a philanderer during the 1970s. In 1972, Kaz traveled to Colombia, and joined a band of revolutionaries and became a drill sergeant, and later gained the name "Master Miller". He eventually encountered Big Boss, and attempted to take his own life with a grenade, but failed. After Kaz fell unconscious, Big Boss liked Miller's spirit, and decided to have him taken to a field hospital. Once regaining consciousness, Big Boss offered Kaz a role in joining the Militaires Sans Frontières, and Kaz eventually agreed after dealing with defeat.

Miller remained on Mother Base as Big Boss went off to rescue Paz and Chico from XOF, but the base was attacked by the group. Kaz and Boss managed to escape in a helicopter and watched Mother Base be destroyed, which enraged Miller since he realized that the UN's inspection was nothing but a ruse. He then attempted to interrogate Paz on what she knew, but she jumped out of the helicopter to save Boss from a bomb placed within her stomach. The helicopter crashed into another due to the explosion, with Miller, Boss and the medic surviving the incident. Taken to a hospital, Kaz learned that Boss was in another coma and that the medic survived despite their injuries. Miller then returned as a mercenary, and received some support from Zero to do his activities.

After Big Boss was put into a coma from MSF's destruction, Miller and remaining members of the group decided to create Diamond Dogs, where he started to train recruits. While training the Mujahideen to fight against the Soviet Army, Miller and his team were captured by the Parasite Unit, and being tortured by the Soviets.

In 1984, Kaz was rescued by Venom Snake, who was a medic chosen to become Big Boss' body double, but this secret was kept from Miller. After enduring torture and losing the MSF, Miller became vengeful and obsessed with destroying both Cipher and XOF. Due to losing his arm and leg, Miller decided to head Mother Base while Venom Snake went on missions, and communicated with Boss during said operations.

After eventually abandoning Big Boss and Diamond Dogs, under the name "McDonell Benedict Miller," he later served as a survival instructor for the SAS, the Green Berets, a U.S. Marine boot camp, and eventually FOXHOUND. He also went on to volunteer as a coach in a mercenary school twice a year. During his time as a drill sergeant in FOXHOUND, he was referred to as "Hell Master" and draftees called him "Master Miller" with the utmost respect. It was at FOXHOUND's training camp that he met Big Boss's son, Solid Snake. At some point, he married, and had a daughter, Catherine.

In Metal Gear 2: Solid Snake, Miller was hired by Roy Campbell to act as a survivalist specialist in FOXHOUND's attack on Zanzibar Land. Miller offered his support to Solid Snake, by radio, providing information on survival techniques, and guidance on how to overcome the various obstacles Snake faced during his infiltration of Zanzibar Land. Such advice included code breaking and finding alternative uses for any equipment at hand, as well as moral support. In Snake's final battle with Big Boss, Miller called his former friend a monster, and aided Snake in defeating him, seemingly bringing on Big Boss's downfall. 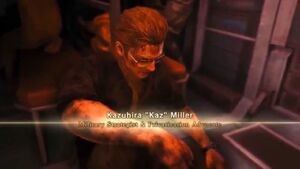 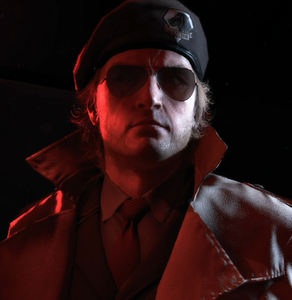 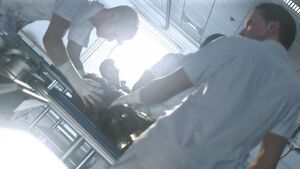 Kaz in the hospital with Big Boss in The Phantom Pain. 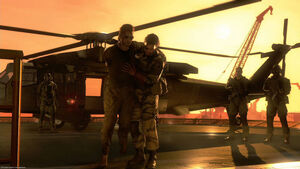 An injured Kaz with Venom Snake, returning to base. 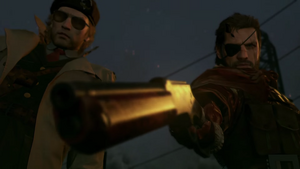 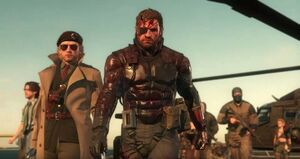 Kaz with Venom Snake on mother base.