Loyal Follower
Kazuichi Banjou is a former leader of 11th ward ghouls. Typically, he is seen with his followers Ichimi, Jiro, and Sante. After escaping Aogiri, he and his followers joined Kaneki's group of ghouls. He was in love with Rize Kamishiro.

A towering, stout man with short flushed hair, Banjou carries a strong heart. He has a distinctive reverse 'の' for a beard.

Banjou is a pacifistic ghoul. He admires those who are strong and unbound by strict rules, like Rize Kamishiro. Unlike most ghouls from the 11th Ward, Banjou seems to have a fair bit of compassion towards others.

Ichimi, Jiro & Sante Banjou's three gas-masked followers are almost always seen accompanying their leader wherever he goes. The four's history dates back to when they all were a part of the 11th ward. They all share a very close bond with Banjou, are surprisingly loyal towards him, willingly following him through any situation and even risking their lives to help. They are also all well aware of his shortcomings and often display an overwhelming concern for when he's in trouble. Despite their vast respect for Banjou, the three are not above jokingly poking fun at him from time to time too.

Ken Kaneki Banjou's initial reaction towards Kaneki was a hostile one: Kaneki's similar scent to Rize led Banjou to believe that the half-ghoul was in a relationship with her. When the situation was properly explained, however, that Banjou began to revise his first impressions. After realizing Rize's fate, Banjou develops new respect towards Kaneki, appreciating Kaneki's concern for his feelings despite the deceit. Afterwards, having gone through many trials together escaping Aogiri's captivity, Banjou conveyed his regard to Kaneki's compassion. As such, he offered to help Kaneki on his endeavors. From here on out, both Banjou and Kaneki hold a great deal of admiration for each other, and are often seen helping one another through various means. Whether it be through Kaneki training Banjou to become stronger, or Banjou assisting Kaneki to maintain his stability.

Rize Kamishiro Banjou is known for harboring a distinct affection towards Rize. He admires the way she lives her life through her own accord, however reckless it may be.

Ever since Rize's arrival in the 11th ward, Banjou grew a real fascination for her. During the scheduled meetings there, he would often fend off the criticisms she would receive from the other members attending. Outside of that, Banjou would actively seek out Rize and try to strike up conversations with her, much to her annoyance. Despite later being berated by Rize, and eventually parting ways, Banjou would continue his devotion to her, on the off chance they would one day meet again.

Hinami Fueguchi Hinami looks up to Banjo like a big brother. They have a close relationship to the point where they even watch horror movies together despite Banjo being afraid of horror movies.

When it comes to strength, even his followers call him weak. He used to be unable to use his Kagune and also lacking at hand-to-hand combat. It seems he has an Ukaku-type kagune. What's more, he is naturally not suited for fighting because of his peace-loving personality. Being sturdy is his only redeeming feature.

In the end of the Raid on Kanou's Lab Arc, Banjou has shown to have extraordinary regenerative powers even for ghouls when damaged by a berserk Kaneki. Whether this was due to his kagune or other factors is unknown. 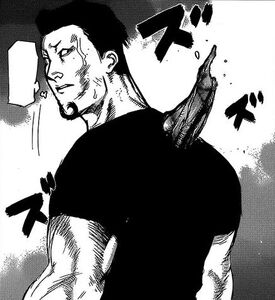 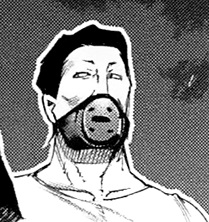 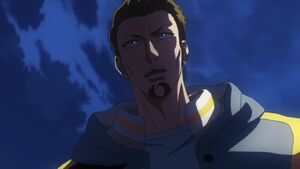