Student of Class 77-B (formerly)

To get out from the Killing School Trip (DR2, succeeded).

To stop Ryota Mitarai from brainwashing the world with hope (succeeded).
To atone for his actions as a member of Ultimate Despair (ongoing).
To win the love of Sonia Nevermind (failing).

Kazuichi Soda is a protagonist featured in Danganronpa 2: Goodbye Despair. He has the title of Ultimate Mechanic.

Kazuichi returns in Danganronpa 3: The End of Hope's Peak Academy as one of the students from Class 77-B in Hope's Peak Academy with the other Remnants of Despair. Kazuichi succumbed to despair along with his classmates after being brainwashed by Junko Enoshima and became a part of Ultimate Despair.

Kazuichi managed to survive the final trial and escape back to the real world with the other survivors at the end of Danganronpa 2 and remained on Jabberwock Island. He and his classmates who awakened from their comas decide to atone their sins as the former members of Ultimate Despair.

Kazuichi tries to put up a front of being a cool tough boy, but it's just a facade, and a very thin one at that. In actuality, Kazuichi is an easily-rattled coward who spends most of the Despair Game being completely terrified of everything he comes across, causing him to seem fickle and unreliable as a result.

Kazuichi also has a serious crush on his classmate Sonia Nevermind, but unfortunately, he has no idea how to express it. As a result, every time he attempts to flirt or get close to Sonia, he just winds up creeping her out, as well as everyone around him. When Sonia takes interest in Gundham Tanaka, Kazuichi is extremely jealous and has a very hard time accepting it.

However, despite all of his faults, Kazuichi still has a good side. When Akane is heartbroken over her friend Nekomaru's death, Kazuichi stays up all night and builds a mechanical Nekomaru doll for her. Also, after Gundham's death, he gives Sonia time to grieve, since despite his jealousy, he knew that she cared for him.

Kazuichi's life seemed to have been fairly tougher than a normal child's. He and his father ran his family's bike shop, but nothing was ever sold. The bike shop wasn't always inactive, however, many customers would ask for them to fix their bike tires or inflate them. Despite this, the family was still often low on money. In result, though, Kazuichi got plenty of practice with making and building things.

Kazuichi liked to improve many things, such as his greatest invention, attaching an engine to the machine that draws the chalk lines on soccer fields. However, it escaped through the school entrance at full speed, without curving or stopping.

As a child, Kazuichi was also very skittish and easily picked on. He had a best friend in middle school. They always did everything together, and could he talk to him about anything. Once, Kazuichi let him cheat off his test because his friend had begged him for help, but they both got caught by the teacher. He insisted that Kazuichi was the one who willingly gave him the answers. Starting from that point, his friend began avoiding Kazuichi, though, in actuality, Kazuichi didn't really care about being scolded. However, because of this, Kazuichi later developed trust issues.

Kazuichi let other children step all over him, but then he decided to change his appearance entirely. From changing his hair color to losing his glasses, and presumably sharpening his teeth so that he could fit in better with people around him. It seems as if it'd do the opposite, but that may just be how his mind works. At this point, he began to put up the "tough punk" facade to avoid more bullying, which, to this day, continues to break almost constantly.

In addition to Kazuichi's rough childhood, with money and bullying problems, his father seemed to have beat him at times. In one of his Free Time Events, he states that he had never been on a field trip, and spoke quite casually about his father beating him when he didn't attend school on those days. Such behavior suggests that he was a subject of excessive abuse.

As a teen, Kazuichi attended Toushima Industry High School. Thanks to his great mechanic skills, he later enrolled in Hope's Peak Academy as the Ultimate Mechanic, in Class 77-B. He quickly developed a crush on Sonia Nevermind, a foreign princess. 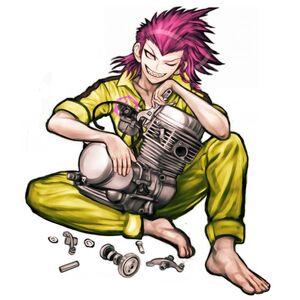 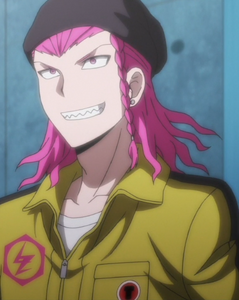 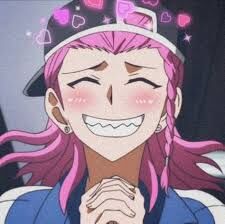