Warrior
Kazuma Kenzaki (剣崎 一真, Kenzaki Kazuma) is the main protagonist of Kamen Rider Blade. He is a young man who was chosen by B.O.A.R.D. to become Kamen Rider Blade, a warrior capable of fighting for humanity.

At the age of 11, Kenzaki was orphaned when his family died in a house fire. The powerlessness he felt would serve as the motivation to try and protect the defenseless, subsequently leading him to be scouted by the Board Of Archaeological Research Department (BOARD). From his intelligence and exceptional survival instincts, he would eventually be promoted to field operative and the designated user of Rider System-02.

However, during assessment for the Rider System, Kenzaki displayed unusually high fusion coefficiency. Though this caused no immediate concern, as his levels maintained steady intervals. After being promoted to Rider status, Kenzaki would be partnered with fellow BOARD Rider and senior operative Sakuya Tachibana on assignment to hunt down three Undead over the next two months.

Eventually sealing the Bat Undead, Kenzaki meets a web-journalist named Kotarō Shirai, who begins investigating the Riders after witnessing Kenzaki carelessly changing back from his transformation. To lessen the risk of exposure (and to find a place to board after losing his apartment due to delinquent payments), Kenzaki made a deal with Kotarō: In exchange for information concerning the Riders, Kotarō would provide him a place to stay; being that his salary with BOARD was barely enough to make a living. However, later that evening, disaster struck as BOARD HQ fell under attack from the Locust Undead.

With Sakuya's desertion and Kei Karasuma--BOARD's president--nowhere to be found, Kenzaki and Shiori Hirose, one of BOARD's surviving agents, set-up a new base of operations in Kotarō's home, using whatever equipment left undamaged during the Undead assault on BOARD HQ. Though operating at a limit capacity, Kenzaki, Shiori, and Kotarō successfully began tracking and sealing any active Undead in the area. However, eventually, Kenzaki redirects his focus on tracking down the rogue Tachibana, leading to a rivalry with a being named Chalice, who possesses similar powers & abilities to his Rider System. Their frequent encounters led to the discovery that Chalice was a man named Hajime, but the origins of his powers and his motives remained a mystery at the time.

Events escalated when Kenzaki finds himself abducted by agents of a man named Isaka (the man responsible for Tachibana's strange behavior) as the subject of study for his human-Undead fusion research. Kenzaki was forced to transform and battle against the Trilobite Undead, while his captors monitored his fusion activity. As the battle progressed, Kenzaki showed no changes in fusion stability until Hajime appeared. This cause a noticeable spike in Kenzaki's fusion activity which curiously effected Hajime as well, spurring him to transform and intervene, along with Tachibana. During the course of their battle, the mysterious Hajime is revealed to be non-human, despite the previous speculation and was, in fact, a being called the Joker Undead. Gradually, Kenzaki begins to empathize with Hajime, recognizing him as more than a mindless monster.

As the Riders continued their exploits, Kenzaki and Tachibana would reconcile their grievances and begin operating with each other once more after rescuing Professor Karasuma. They would also find a new ally in Hajime, after a number of encounters and even recruit a new Rider with Mutsuki Kamijo as Kamen Rider Leangle, along the way. However, with the emergence of the Trial Series, Kenzaki (along with his colleagues) would discover the true circumstances behind the emergence of the Undead and the Battle Fight. The Riders would continue sealing the Undead until the BOARD chairman Hiroshi Tenno revealed himself as the true mastermind of the new Battle Fight. Confident that he would win, Tennouji then told the Kamen Riders of the Kerberos Undead's existence, an Undead who surpassed even the Joker Undead in might. While initially overwhelmed, Kenaki's determination allowed him to overpower Tennouji and the Kerberos Undead in battle, defeating them with help from his allies. Soon after, the Giraffa Undead would kill Tennouji and steal the sealed Kerberos Undead's card, attempting to seal Hajime to be declared the new victor of the Battle Fight. With Tachibana's actions though, Kanai would be sealed as well, causing the Joker Undead to be the only unsealed Undead in the world. With all Undead finally sealed, the Stone of Sealing materialized and declared the Joker Undead the winner of the Battle Fight, despite Hajime using the power of the Human Undead at the time. Using its power, the Stone of Sealing began spawning legions of Dark Roaches to ravage the world.

Kenzaki, alongside the other Riders, fought desperately to contain the Dark Roach hordes. They fought valiantly but were ultimately overtaken. Kazuma would find Hajime and the two would engage in combat. However, Kenzaki's objective was not to seal Hajime. Since the Dark Roach Army emerged, he had been using his Rider System's King Form to accelerate his mutation into a full Joker Undead. Being fully aware of the consequences, Kenzaki realized that as long as two Undead remained, the Battle Fight could continue indefinitely as long as he and Hajime avoid combat with each other. His strategy worked, and the Dark Roaches were removed by the Stone of Sealing, allowing the world to continue existing. Horrified at what he had indirectly caused Kazuma to do, Hajime reached out to him. Yet, Kenzaki told him to stay away, assuring his friend through a faint smile before leaving.

Kenzaki's sacrifice enabled Hajime to keep the Human Spirit card and maintain his disguise while living among the Kurihara family and would forever be indebted to him. Kenzaki on the other hand, having sworn to win against his destiny as an Undead, left to parts unknown.

Due to timeline interference by Time Jackers in 2019, both Kenzaki and Hajime were lured by them into coming out from the shadows and fighting each other again, when a White Woz forcefully turn a grown up Amane into Another Rider Blade. Kenzaki thought Hajime broke his promise of not using his Undead powers, the main reason Kenzaki have no choice to resurface from the shadows.

When Another Blade absorbs Kenzaki and Hajime’s Joker Undead cells, Kenzaki regain his humanity, whereas Hajime becomes a complete human. Once Zi-O Trinity Form averted the Undead Battle Fight through erasing Joker Undead’s existence, and rescues Amane from her monstrous state, both Kenzaki and Hajime can finally live in peace with human society, entrusting their Ridewatches to the Time Riders. 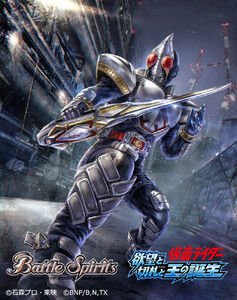 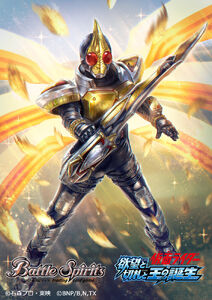 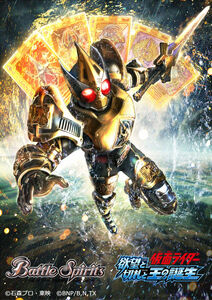 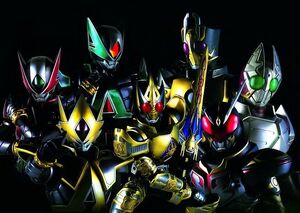