Searching for a worthy opponent

Kazumi Sawatari is the Kamen Rider of Hokuto and one of the main protagonists of Kamen Rider Build. Though initially antagonistic towards Sento Kiryu and co., he later allies with them after his nation is invaded by Seito. By inserting the Robot Jelly Bottle into his Sclash Driver, Kazumi transforms into Kamen Rider Grease.

He is portrayed by Kouhei Takeda, who also played Otoya Kurenai and Masao Kurenai in Kamen Rider Kiva and Vaan in Final Fantasy XII via motion capture.

Kazumi was originally the owner of a family farm in Hokuto, where he employed Akaba, Aoba and Kiba as his workers. However, after the Sky Wall Disaster occurred, virtually all of the land in the region was rendered infertile. Rather than lay off his workers, Kazumi used his savings to help support them and their families.

After his savings were depleted, Kazumi offered himself up to be experimented on as a test subject by Faust so he could keep supporting his employees. He told Blood Stalk to tell his workers that he had lost his memories as a side effect of the experiment.

In preparation for Hokuto's invasion of Touto, Kazumi was placed in charge of a strike team and tasked with acquiring Touto's Fullbottles and Pandora Box panels. Soichi Isurugi provided him with a Sclash Driver that would allow him to transform into Kamen Rider Grease. The rest of Sawatari's team was comprised of his three workers who, feeling indebted to their boss for his sacrifice, had allowed themselves to be turned into Hard Smash.

After Prime Minister Yoshiko Tajimi declared war on Touto, Kamen Rider Grease spearheaded Hokuto's advance into the neighboring nation, penetrating the Skywall to get through.

He was encountered by Ryuga Banjou as he was searching for the Hokuto Three Crows. When a Strong Smash Hazard suddenly appeared and began attacking bystanders,, Kazumi destroyed the Smash in one punch using his hidden Helicopter Fullbottle before Ryuga had a chance to use the Build Driver. He later showed up to challenge Sento and Ryuga after they defeated the Hokuto Three Crows.

During a fight with Kamen Riders Build and Cross-Z, Kazumi lost Aoba when Build went on a brutal rampage induced by Hazard Trigger's affects and killed him. After canceling Sento's form, Kazumi went over to Aoba who handed his name tag over to Kazumi before dying and disintegrating into blue smoke.

When Seito took advantage of the displacement of Hokuto's troops to launch an invasion of the country, Kazumi and the remaining Crows entered into a fight with the Washio brothers. During the fight, Kiba sacrificed himself to block a finisher from Remocon Bro's. As he laying dying, Kazumi called Kiba by his real name, revealing that he hadn't actually lost his memories. Kiba then handed his dog tag over to Kazumi before disintegrating into yellow smoke.

Kazumi went on to witness Akaba being killed by Kamen Rider Rogue, with Akaba's final words being to thank his boss for everything. Kazumi ran up to Akaba, calling him by his real name as he disintegrated into red smoke and left his dog tags behind.

Kazumi would later make a grave for the Three Crows at Sky Road. He continued to fight against Seito to ensure the well-being of the Crows' families.

Confrontation at the Pandora Tower

After Evolt revealed his extraterrestrial origins to the world and announced his intentions to destroy it, he challenged the Kamen Riders to a final battle to decide the fate of planet. To be more powerful for the upcoming battle, Kazumi asked Sento if he could make an upgrade for him, to which Sento revealed to Kazumi that the Blizzard Knucke was intended to be one for him. However, Sento warned Kazumi that the Blizzard Knuckle was only intended to be used as a weapon and that using it as a transformation device with the Build Driver would make him at risk of dying.

Alongside his fellow Kamen Riders, Kazumi showed up to confront Evolt at the summit of the Pandora Tower. Evolt then explained to them the rules of their fight: they would have to reach the top of the Pandora Tower and for every ten minutes that they didn't he would destroy a section of Japan. After Evolt teleported off and sent his Hard Guardians after them, Kazumi and the others transformed into their Rider forms and obliterated the Hard Guardian army by combining their attacks.

Making their way inside the tower, the four encountered what appeared to be the Hokuto Three Crows. However, Grease instantly identified them as impostors. Congratulating Grease on being able to spot them as fakes, Evolt explained that they were mimics created from his DNA and warned the Riders to keep moving before he destroys another section of Japan. Telling the other Riders to go along without him, Evolt stays behind to face off against the impostor Hokuto Three Crows, who transform into their Smash Hazard forms to take him on.

While initially managing to fight them off, the doppelgangers exploit Kazumi's feelings of protection for the real Three Crows to mess with him and gain an advantage. After being overpowered by the three mimics, Kazumi cancels his Kamen Rider transformation and recalls how he felt when each of the Three Crows died. Revealing he had snatched Shinobu Katsuragi's Build Driver, Kazumi inserts the Blizzard Knuckle into it to transform into Kamen Rider Grease Blizzard and faces off against the mimic Hokuto Three Crows, apologizing to Sento for going back on his promise not to die.

As Kamen Rider Grease Blizzard, Grease managed to destroy each of the three mimic clones, though soon began to fade as a side affect of transforming with the Blizzard Knuckle. Not being able to do anything to stop himself from dying, Grease instead uses the opportunity to purify the Castle Lost Bottle for Sento.

As he reverts from his transformation, Misora clutches him in her arms and begs him not to die, telling him the reason why she always called him "Grease" rather than his real name was because she was worried that saying it would lead to him being killed. Commenting that he can't die when has his favorite girl rooting for him, Kazumi fades away, leaving behind the Castle Lost Bottle and his dog tag for Misora to collect.

In the new world created by merging the World of Build into the main Kamen Rider world, Kazumi was still the owner of his farm with the Hokuto Three Crows at his side. He was seen eating at the nascita cafe with the Hokuto Trio and fell in love with Misora at first sight.

Kazumi had his memories of the World of Build restored along with the rest of Team Build after Killbus opened the Pandora Box again. Reuniting with his old comrades, Kazumi and the others were informed by Sento of the threat posed by Killbus.

Kamen Rider Grease and Kamen Rider Rogue showed up to rescue Ryuga from Killbus and teleport away with him and Yui Mabuchi, bringing them to Sento's back-up lab. When Ryuga went to go face off against Killbus, Kazumi and Gentoku accompanied him and fought off the Clone Smash Killbus summoned.

At the end of the special, after Killbus has been defeated, Kazumi and Gentoku are seen getting irritated with Ryuga for ignoring the signs that Yui obviously likes him.

The transformation belt used when transforming into Kamen Rider Grease. Transformation is possible by inserting the Blizzard Knuckle into the twin Fullbottle slots.

A brass knuckles type reinforced item developed by Sento Kiryu. By loading it in the build driver together with the North Blizzard Full Bottle, it can be transformed into Kamen Rider Grease Blizzard. In addition, it has the function of taking in the components of the loaded full bottle and increasing the power of the blow attack. 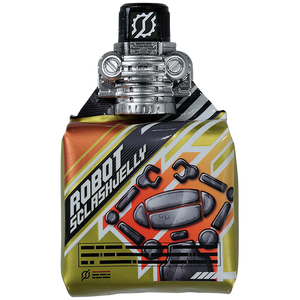 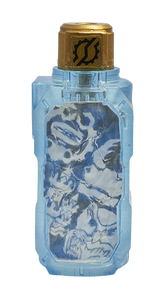