Protect the world from Dogma, Jin Dogma and other evil organizations.

Cyborg
Kazuya Oki (沖 一也 Oki Kazuya) is the eponymous protagonist of Kamen Rider Super-1. He underwent the procedure to become Kamen Rider Super-1 for the purposes of space travel and used his newfound powers to battle the Dogma Kingdom.

He was portrayed by Shunsuke Takasugi.

Kazuya Oki volunteers to undergo cybernetic surgery in the International Space Development Program in the United States in order to become an Astronaut who can survive in outer space without the need for a bulky external suit. After a successful operation, he is given the codename "Super-1". Before he can depart for space, however, the base where he received his operation is attacked by the Dogma Kingdom. Only Kazuya is able to escape.

Determined to avenge the deaths of the scientists, he returns to Japan and is trained by a martial arts expert, Master Genkai. With this knowledge, he is able to transform into the powerful Kamen Rider Super-1.

At the half of the series, Super-1 finally topples the Dogma Kingdom, only to encounter another evil group called the Jin Dogma. At this point, the series became much more lighthearted, with the introduction of the Junior Riders, who serve as comic relief, and the bizarre Jin Dogma kaijin. Jin Dogma's monsters are based on household objects, such as Ladders, Basketballs, and Refrigerators; reminiscent of Obake from Japanese folklore.

Ultimately, Kazuya defeats Jin Dogma, allowing Japan to exist in peace. He then finally fulfills his childhood dream and ventures into outer space with the help of a new team of scientists. 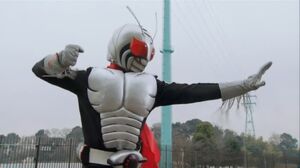 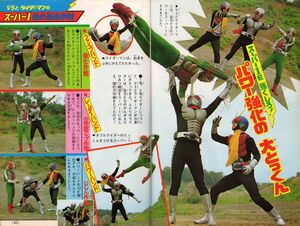 Retrieved from "https://hero.fandom.com/wiki/Kazuya_Oki?oldid=2139000"
Community content is available under CC-BY-SA unless otherwise noted.