Secret Agent
Kazuya Taki (滝 和也 Taki Kazuya) is the supporting character in the Kamen Rider and also in Kamen Rider Spirits, where he becomes a warrior assuming the identity of Taki Rider (滝ライダー Taki Raidā). He is an FBI Agent who comes to Japan in pursuit of Shocker, leading him to ally with the Kamen Riders to defeat the organization.

Despite not being a cyborg, Taki is an skilled martial artist who can not only to defeat the Shocker footsoldiers, (other footsoldiers in Kamen Rider Spirits with ease) but also hold his own against lower level Altered Humans with the help of advanced weaponry, which is usually impossible for a human to pull off. He also has access to equipment that enhances physical attacks and has displayed expertise in motorcycle riding. In fact, his skill rivaled Hongo's bike riding techniques when he wasn't a Kamen Rider.

In Kamen Rider Spirits manga, when an orphan named Spike was turned into vampire, he was forced to play the act of Kamen Rider 1, donning the mantle of Taki Rider (滝ライダー, Taki Raidā). While at first seemingly easy, he was outnumbered by Father Petrescu's vampire victims until the real Kamen Rider 1 helped him, thus foiling the villain's evil scheme.

Rider Kick (ライダーキック, Raidā Kikku)
The signature move of every Kamen Rider, Taki Rider's version was made via modifying his Combat Boots, which have stun guns inside the soles of the boots to deliver an electrified kick to the target.
Rider Punch (ライダーパンチ, Raidā Panchi)
Taki's version of the Rider Punch, which was empowered by shotgun shells attached to a pair of custom brass knuckles.

So far, among his finisher attacks is Rider Cyclone Kick (ライダーサイクロンキック, Raidā Saikuron Kikku), where he leaps up from his New Cyclone and does a spinning kick, while still grabbing onto the handles of the New Cyclone. 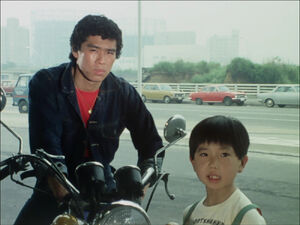 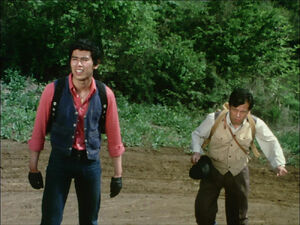 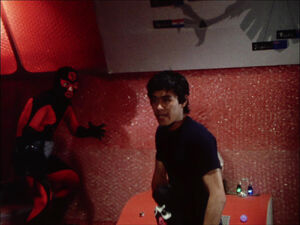 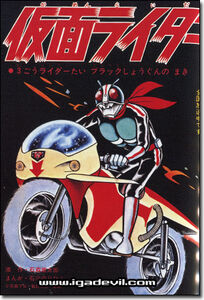 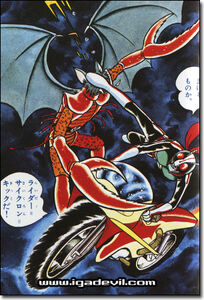 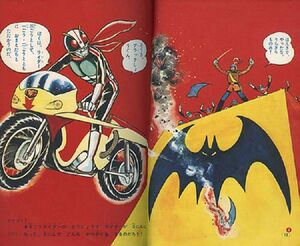 Retrieved from "https://hero.fandom.com/wiki/Kazuya_Taki?oldid=2132765"
Community content is available under CC-BY-SA unless otherwise noted.