Keesha Franklin is the more level-headed and realistic student in the class. She is most of ten the most sarcastic one as well. Because of her skepticism, she usually argues with Ralphie, who tends to live in his imagination. She's also shown to be ambitious, but unlike Janet, another ambitious character, she will stop her pursuit when she realizes she's either wrong or putting her friends in danger.

Keesha and Arnold find themselves in a bad situation when they both forgot their "Two Beach Things That Go Together" report ("Gets Eaten"), but they manage to pull their report together during the field trip. While the class tries to think of an idea for the science fair, Keesha comes up with the idea to make a movie about the ant she followed into class ("Gets Ants In Its Pants"). She becomes frustrated when she can't find a central ant to focus on in the ant hill. She clashes with Ralphie in "Kicks Up a Storm" when they argue over how weather works. She's further irritated by him taking on the superhero persona of Weatherman.

Keesha and Ralphie clash again in "Flexes Its Muscles" and "Going Batty." In the former it's because he wants to build a robot to do everyone's chores; in the latter, it's because he is convinced Ms. Frizzle is a vampire. She takes Ms. Frizzle to "court" when she learns she had something to do with her prize-winning cucumber disappearing ("In a Pickle"), only to learn it was pickled to preserve it.

In "Gets a Bright Idea," she clashes with Janet, who's upset that the school chose Keesha's light show idea over her magic show for a school-wide field trip. Janet decides to prove she can work magic with light to scare the class, but it backfires when Keesha realizes what she's up to.

Ralphie is angry that all the class has to offer is an empty jar in the town space capsule, but Keesha knows there has to be more to air ("Goes on Air"). 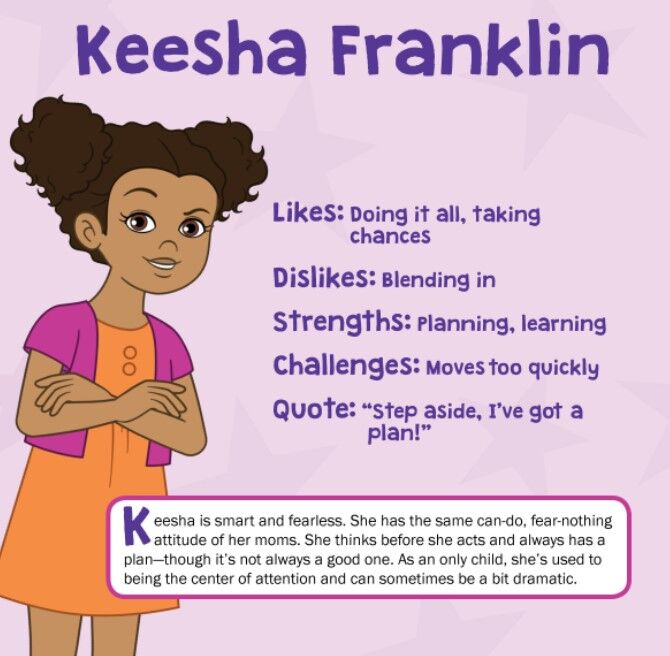 Retrieved from "https://hero.fandom.com/wiki/Keesha_Franklin?oldid=2196848"
Community content is available under CC-BY-SA unless otherwise noted.