Defeat Goku and ascend to a Super Saiyan 3 (failed).

Kefla is a minor yet pivotal antagonist in the Dragon Ball Super series.

Kefla is the Potara Fusion born from the merging of the Universe 6 Saiyan warriors Kale and Caulifla. She served as the secret weapon of Team Universe 6 during the Tournament of Power, and was created in the hopes that she would be able to defeat Son Goku and help her universe escape erasure at the hands of the Omni-Kings.

She is voiced by Yukana and Yuka Komatsu in Japanese and by Elizabeth Maxwell and Dawn M. Bennett in English. Maxwell has also voiced Winter Schnee in RWBY, Ymir in Attack on Titan, and Midnight in My Hero Academia.

Kefla is a slender girl of average height. Kefla's hairstyle is a mix between the both of those owned by the female Saiyans, being spiky like Caulifla's with bangs on both sides of her face while the majority of her hair is held up in a ponytail like Kale's. Her facial features and eye shape are more reminiscent of Caulifla's, but her complexion is a middle between both of their skin-types complexions. She wears Kale's golden armbands however they are now the same shape as Caulifla's wristbands, boots though the red part of them is replaced with the black of Caulifla's, and a purple belly shirt with form-fitting purple pants (being a mixture of both of their pants) from Caulifla's color scheme. On her ears, she has two green Potara Earrings.

Even though she is a fusion between Caulifla and Kale, Kefla's personality just seems only similar to Caulifla's. After her birth, Kefla remarks she feels great, displaying Caulifla's overbearing confidence. She also appears to be possessing the Universe 7 Saiyans' desires to fight even stronger opponents and becoming stronger herself. During her initial scuffle with Goku, Kefla also displays Caulifla's cocky attitude, calling Super Saiyan God Goku's attacks "lame". Her overall confidence in such abilities also has Kefla believe she can beat Goku, even if he is in his blue form.

However, despite her immense confidence in her power, Kefla does seem to retain some of Caulifla's respect towards Goku. Outright calling him a "worthy opponent", being delighted when Goku reciprocated by going Super Saiyan Blue, and seeming almost saddened when she thought she had defeated him easily, and smiled when he stood up after having taken a powerful blow. Also, Kefla did seem to be even more eager and excited when Goku managed to reactivate his Ultra Instinct -Sign- against her and the realization of being potentially defeated by him seemed to have made Kefla develop a strong determination towards defeating Goku to the point it appeared she was deliberately trying to destroy him in a fit of rage.

Kale and Caulifla were two female Saiyan warriors from Planet Sadala in Universe 6 who were selected by Cabba to join Team Universe 6, a team of ten mortal warriors who would compete in the Tournament of Power to decide the fate of their universe (as the Omni-Kings that ruled over the Multiverse intended to erase the universes that lost). Before warping to the arena, Team Universe 6 gathered at God of Destruction Lord Champa's planet where the Destroyer gave Kale and Caulifla the Potara Earings of the Supreme Kai Fuwa. The Saiyan women were instructed to only put them on as a last resort.

During the Tournament of Power, Kale and Caulifla battled Son Goku—a powerful Saiyan from Team Universe 7. The pair were ultimately defeated by Super Saiyan God Goku who blasted them off the ring with his "Kamehameha" energy wave. As they fell, Kale and Caulifla donned the Potara earrings and transformed into Kefla. With her newfound power, Kefla jumped back into the ring with astonishing speed before she could pass out of bounds. Perching on a rock, Kefla began letting out her seemingly unlimited energy much to the shock and concern of many fighters in the arena.

Wanting to test her newfound power, Kefla shows her immense speed, enough to catch Super Saiyan God Goku completely off guard. During a brief scuffle, Kefla shrugs off Goku's attacks, completely, calling them "lame", and knocking the Saiyan down. Kefla further pressures Super Saiyan God Goku, forcing Goku to no longer prioritize his stamina and transform into Super Saiyan Blue. To combat this, Kefla herself becomes a Super Saiyan. The two fight an even battle, however one of Kefla's attacks forces Goku to go Super Saiyan Blue Kaio-ken. Kefla then defeats Goku with a surprise attack, and prepares to eliminate him, however she is cornered when Goku suddenly regains his Ultra Instinct -Sign- state.

Kefla answers by charging up even further, turning into Super Saiyan 2, her power impressing everyone, to the point she claims she could destroy an entire universe in a single shot, and proceeds to attack Goku, who dodges all of her attacks and lands a hit on her, with Kefla claiming that he can still do better than that. Goku then surprises Kefla with a barrage of punches and throws her away. Kefla then proceeds block Goku's punch, only to be kicked away after trying to attack him, she then becomes enraged and starts further powering up and generating an onslaught of ki blasts and lightning bolts that covered most of the arena. Goku manages to dodge most of her attacks, though he was slightly hit twice by her energy, he then starts to power up a Kamehameha while reflecting Kefla's attacks. He then jumps in the air towards her, and she says he will not be able to dodge in mid-air and charges a powerful ki blast and fires it at Goku, who dodges it much to Kefla's surprise, and hits her at point-blank range with his Sliding Kamehameha, which throws her out of the arena and breaks her potara earrings, dissolving the fusion.

Being a result of a powerful fusion, Kefla is extremely powerful. Power-wise - she takes after Kale (in her unleashed form), as her ki energy is green and possesses the latter's strength, speed, durability (on a far greater scale). She also has access to the Super Saiyan transformation. As a testament to her might, Kefla easily outclasses Goku in his Super Saiyan God and Blue form (including the latter form in conjunction with Kaioken). 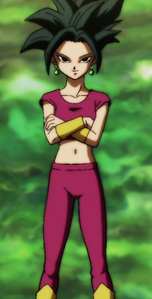 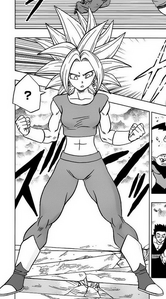 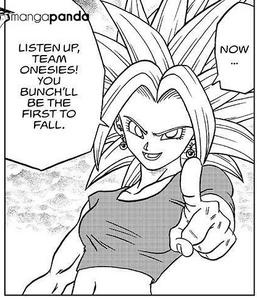 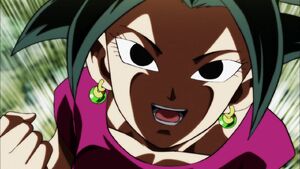 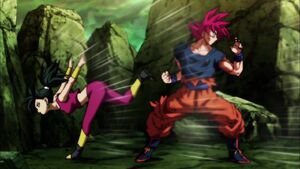 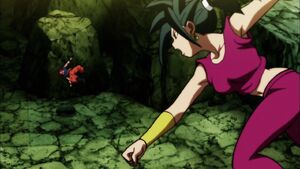 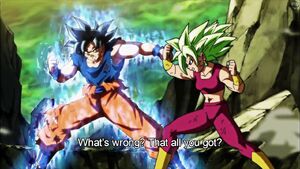 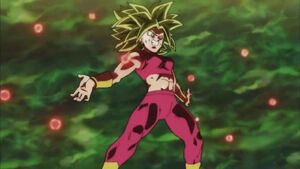 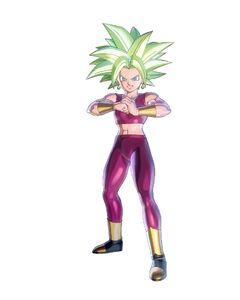 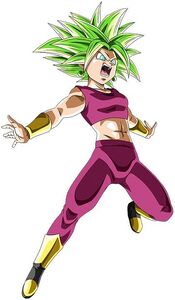