Kei Kurono is one of the main characters of the manga series, Gantz and its adaptations. He is a teenager during the events of the original manga and the anime.

Throughout the first two arcs Kei is seen as a selfish, hesitant, and reckless person. However, his entire view on life changes after watching Kato's determination to keep everyone alive. After Kato and Kishimoto die during the fight against the Buddha aliens, he finds it in himself to overcome his fears and make Kato's mission a reality (To keep all of the players alive through the missions). As the missions go on, he is regarded as a "hero" and "leader" by the new members in the Gantz Tokyo team.

Despite his relatively humble beginnings, Kurono grows into one of the greatest Gantz-fighters ever seen in the series. The key to his success is his often reckless and risky fighting style, which allow him to catch opponents off-guard. His weapons of choice are the standard X-Gun and X-Rifle, though he is also shown wielding the Gantz Sword and H-Gun. Despite lacking any formal training, he does not shy away from melee combat, using the suit's strength-enhancing capabilities to launch himself as a projectile. He is fast enough to keep up with the likes of Eeva Gund and the Oni Alien leader in close quarters combat.

Kurono's greatest strength becomes his ability to inspire others. His will to survive and defiance in the face of danger inspires both admiration and jealousy from his peers in the Gantz-room. Between missions, he works to hone his skill and teaches other willing Gantz-fighters how to fight. 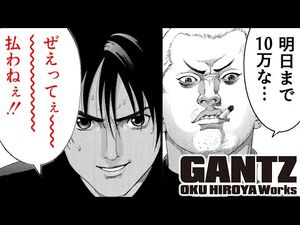