Keiji Maeda is a wind-element character from the Sengoku Basara series, debuting in Sengoku Basara 2. His weapon of choice is a ludicrously oversized ōdachi.

Keiji Maeda is a character first introduced in Sengoku Basara 2. He is Toshiie Maeda's and Matsu's adopted nephew, and occasionally fights with them. He has a mysterious past with Hideyoshi Toyotomi and Hanbei Takenaka which was touched on in Sengoku BASARA 2 Heroes. Keiji is what people call a happy-go-lucky man. He enjoys festivals, as well as pulling pranks on Toshiie and others. Despite his demeanor towards his adopted family, he loves them, though sometimes shows resentment towards them due to their objection to his lifestyle. Accompanying him is a small monkey named Yumekichi. He receives a three-stage gaiden in Sengoku Basara 2 Heroes, where he used to be friends with Hideyoshi Toyotomi, but loses him due to Hideyoshi's lust for power.

In Sengoku Basara 3, after the death of his former friend Hideyoshi, Keiji joins the ranks of the Uesugi army, under his close friend Kenshin. In his default paths, Kenshin asks him to him to run an errand to deliver a message to Magoichi Saika, telling him to stop by the Maeda's on the way there. Upon meeting Magoichi, Keiji falls in love with her at first sight, and the remainder of his path is devoted to following her and attempting to protect the woman, much to her ire. Like Magoichi's path, this means that the player and Keiji will join either the Eastern Army or the Western Army. Depending on the player's choices and the paths they follow, in the end Keiji can return to the Uesugi, return to the Maeda, or join Magoichi and the Saika.

Keiji's story is unlocked by finishing the first story of Date Masamune. Additionally, he can be unlocked an ally when the player defeats him (and the Uesugi) as Magoichi. As an ally, he has a special ability: Damageproof, which reduce damage taken from enemies up to 20%. Pressing the Select button will cause him to dance and say "Antemo lotte lotte!"

His base weapon is a ludicrously oversized nodachi. Despite its length, he can use it one-handed. He also uses its sheath, but rather than carry it around he throws it in to the sky, having it come down just when he needs to use it. 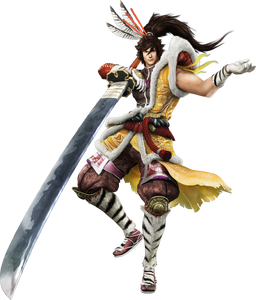 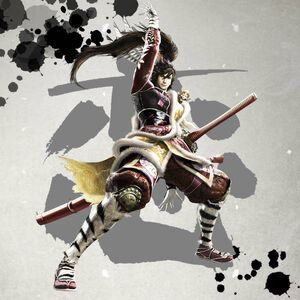 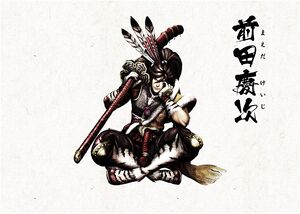 Retrieved from "https://hero.fandom.com/wiki/Keiji_Maeda_(Sengoku_BASARA)?oldid=1857991"
Community content is available under CC-BY-SA unless otherwise noted.