Start a Wiki
Keith Bishop is a hero who appears exclusively in Aero Fighters/Sonic Wings, which is available as a playable character but he turned into non-playable character in later appearances within the series. He is a wise-cracking, experienced flyer who is surprisingly tender towards his family. He has a wife and one young son. Keith always wears sunglasses and usually has a cigarette in his mouth; he dresses in a green military uniform and wears a helmet.

In single-player mode, Keith survives the mission, unlike the more unfortunate Keaton. Keith is shown reunited with his wife and son, along with the reminder that there are "other battles to be fought." In cooperative mode, Keith is partnered with Blaster Keaton. Keith takes his missions much less seriously than Keaton does, often complaining about having to fight under extreme conditions. After the final boss battle, Keith crashes into the aircraft carrier upon which he and Keaton were meant to land, sinking it.

Keith has a single cameo during the end sequence in two-player mode using Cindy and Ellen with Steve/Angela. Keith serves as their drill instructor, telling the girls to run 10,000 meters.

Keith appears if the player defeats Lar using Spanky and Lord River-n-White; Spanky turns out to be Keith in a dolphin costume.

Keith as a cameo appearance in Aero Fighters 2.

Keith and his family, the Bishops. 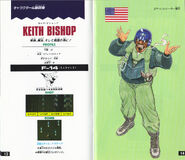 F-14 Tomcat in Aero Fighters.
Add a photo to this gallery
Retrieved from "https://hero.fandom.com/wiki/Keith_Bishop?oldid=908677"
Community content is available under CC-BY-SA unless otherwise noted.