Keith Martin was a playable character controlled by the first player in Time Crisis II as his debut. He is a British agent of Special Air Service (SAS) prior to be assigned and recruited to the VSSE. To protect Keith from sudden assaults and prosecution, it addresses him the nickname Cherub (Eden's Guardian) as the same way the SAS saved his existence. As a possible civilian, he is a visual effects technician and a stunt double for the movie industry of Hollywood. In the game, he joined up together with Robert Baxter during the Neodyne Industries Case, where Cristy Ryan is kidnapped by the terrorists for receiving the file of their satellite network in 1998. However, Keith appears again in the True Mastermind Edition of the fifth installment as a non-playable supporting character (right after the simplicity as the tough 4th stage boss) alongside Robert. In Time Crisis 5, he was modeled to have the players trust that he was the true mastermind and a traitor, but still expensive to them being duped on by the agent midway through the story and to his former partner Robert for being a bad guy after the first 3 stages.

He was voiced by Hideo Ishikawa in the Japanese version, and by Charles Glover in the English version. 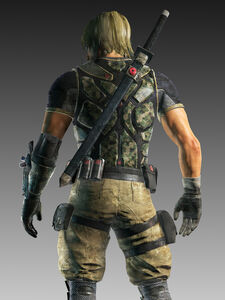 This article contains content derived from the "Keith Martin" article on the Time Crisis Wiki, licensed under CC-BY-SA.