Kelly has a huge network of friends.

gold digger and sex figure
Kelly Bundy is the oldest child of Al and Peggy Bundy in the TV show Married...with Children. She is a minor antagonist and anti-hero.

Kelly's hero status might be questioned considering that she, and the rest of the family, often seem mean and selfish. However, she and the other family members have good qualities… even if they might be hidden deep inside and only come up from time to time.  Just like Al and Peg, she is also an antagonist in the series. She was just like her mom, both of them were manizers aka mean girls who are popular in high school. She did inherit her father bullyiness, when she picks on the outsiders aka the geeks including her brother Bud. Her mean girl friends also bullied Bud and treat him like dirt. One good quality the Bundy family share is that they stand united against outside threats.

Kelly and her brother are often at each other's throats, insulting and making trouble for each other, yet Kelly is always ready to defend her brother when in trouble. For example when Bud is humiliated by a girl, Kelly beats the girl, strips her down and chains her to a wall of lockers with a banner stating "Don't Mess with a Bundy!"

Kelly is a total airhead and very stupid, she grew up to be a wild child and a rebellious daughter.  Why she always fail in get rich schemes and landing a hot guy.

She was portrayed by Christina Applegate.

She is very pretty and she can get a lot of hot guys attention.  But way deep down, it usually backfire on her and she ends up living with her parents.

Kelly is in excellent shape and always seems to win any physical brawl she gets into. She has shown surprising physical strength when fighting for her own or her family's honor.

She is an excellent dancer.

She had a lot of jobs that didn't last that long, even with her good looks didn't exactly help with her acting career.  She was terrible actress, when she had a chance to become famous, she usually fires her brother Bud and become a self-appointed Diva.  Mostly her jobs or Al's get rich schemes always backfire on her. 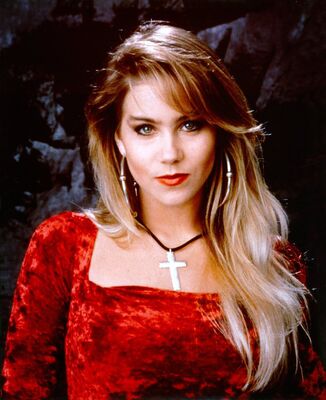 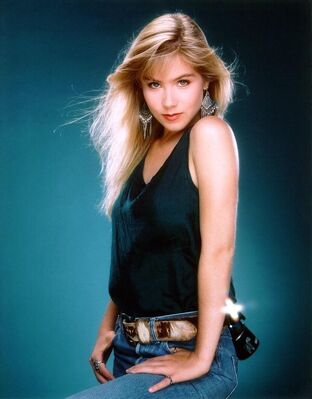 Kelly Bundy
Add a photo to this gallery
Retrieved from "https://hero.fandom.com/wiki/Kelly_Bundy?oldid=2248357"
Community content is available under CC-BY-SA unless otherwise noted.