Kelly Grayson is the deuteragonist of the sci-fi comedy television series, The Orville. A 25th century woman and a member of the Planetary Union, Kelly was Ed Mercer's wife until their divorce after Ed found her in bed with a Retepsian because she was tired of Ed being more at work than her. A year later, Kelly secretly helped Ed get the captain of the USS Orville as a way to atone for her guilt while becoming the ship's first officer. Despite occasional tensions with her ex-husband, Kelly works the best she can with her unorthodox team across the galaxy.

She is played by Adrianne Palicki who also played Bobbi Morse in the Marvel Cinematic Universe, Wonder Woman in the cancelled Wonder Woman 2011 series and Lady Jaye in G.I Joe: Retalition.

A sympathetic woman, sarcastic at times, professional, determined and kind-hearted, Kelly is generally outspoken but is able to hide things or lie for any cause she deems right. In her youth, Kelly was much more social and considerably less confident, as shown when her younger counterpart was moving back in time and learning about her future, she literally turned the timeline upside down.

Faced with danger, Kelly keeps a cool head and shows resistance when threatened, taken prisoner or even beaten up. She has a tendency to be wary of people who are a little too nice at times, like Prea, but it was also a little out of jealousy of the attention Ed was giving the newcomer. She says that as an officer, it's her job to worry about.

Regarding her relationship with the crew, Kelly gets along quite well with them although she is often teased about the breakdown of her marriage to Ed. Her most positive relationship is with Alara Kitan, having full confidence. in his willingness to prove himself and his dedication. Although she generally gets along well with Bortus, Kelly does not personally approve of the whole Moclan culture. Her most chaotic relationship is with Ed, as despite their mutual respect, she tends to question some of her decisions and choices. Although she regrets cheating on her ex-husband, she generally supports her share of the blame in their divorces due to his continued absences, which usually puts them in conflict whenever he brings up the subject. As their new life together progresses, their relationship has improved a lot.

Growing up, Kelly dreamed of one day becoming a captain, thus following in her father's footsteps as an officer and also dreamed of finding love. In her twenties, she met Ed Mercer and the two had a date that Ed enjoyed so much that he offered Kelly another one the next day, which she agreed to.

They ended up getting married in 2414 but things were not going very well for the couple, Kelly feeling abandoned and alone because of Ed who seemed to put his work before her. As if things couldn't get worse, Kelly met a Retepsian named Darulio four years later and the two eventually had an affair which Ed found out on his way home from work, resulting in their divorce.

Using her father's friendship with Admiral Halsey, Kelly ensures that Ed succeeds in securing the captain position aboard the USS Orville. Ed took it very badly that Kelly, whom he had not seen for a year, is now his first officer, especially since she applied for it herself but intends to make another request. to be transferred elsewhere. However, after their first mission which led to the destruction of a Krill ship, Ed was kind enough to keep Kelly on board.

Aboard the Orville, Kelly and her friends went through different adventures as she and Ed being captured by the Calivons to be placed in a zoo, the discovery of a gigantic bio-ship and a new encounter with Darulio, creating tensions between Kelly and Ed.

In "Pria", the Orville saves a scientist named Pria stuck on a comet and Kelly becomes a little jealous of the bond that quickly forms between Ed and Pria so that it turns to mistrust. Kelly's suspicion finally turns out to be true when Pria is revealed to be a thief from the future coveting the Orville for an alien client. The two women subsequently come to blows and Kelly wins, breaking Pria's nose who is erased from existence a few hours later.

In "Mad Idolatry", Kelly crash lands on a Bronze Age planet with the Exploration Team and heals an injured little girl with a healing tool. Returning to The Orville, the crew witness the passage of the planet into another universe so that on its return 11 days later 700 years have passed. They also discover that following Kelly's action, the inhabitants take her for a goddess caring for only those who are worthy. Kelly tries to fix her blunder by convincing a church that she is not a goddess, only so that 700 years later, things get even worse. However, it all worked out when Issac stayed on the planet for the next 700 years.

In "Ja'loja", Ed and Kelly try their best to mend their past relationship but Kelly ends up forming a relationship with the ship's school teacher, Cassius.

In "Home", Kelly spends the majority of the episode emotionally supporting an Ed worried about Alara's declining health. At the end, Kelly and the other crew members say goodbye to Alara who has decided to return to her family.

In "All the World Is Birthday Cake", Kelly participates in the first contact on Regor 2 just to be taken prisoner because of her birth month which on this planet is considered a period of birth to people predisposed to violence. She and Borgus, whose birthday is close to her, are sent to a prison camp from which they try to escape but are quickly recaptured and condemned to death. Fortunately, The Orville crew managed to fool Regorians with a fake star, narrowly sparing Kelly and Borgus.

In "Deflectors", Kelly and Cassius' relationship begins to deteriorate due to their seriously differing opinions on their responsibility aboard the Orville, so much so that Kelly thinks they shouldn't see each other anymore. At the same time, Kelly helps investigate Locar's apparent murder until Keyali finds out it was just a staging. Later in the evening, Cassius comes to ask Kelly if she still has feelings for Ed and when she does not answer that she will always have a share of love for him, Cassius announces to her that he has asked to be transferred to another ship. Although saddened, Kelly accepts his departure.

In "Tomorrow, and Tomorrow, and Tomorrow", a younger version of Kelly is time-shifted on the Orville and her overly laid back aptitude puts her in conflict with the Kelly of the present. When young Kelly is sent back to her time, her memory could not be erased and remembering the revelations about her future, she decides not to make the second date with Ed, changing the future.

In "The Road Not Taken", Following the change in the timeline, Ed never became a captain and the Kaylons destroyed the federation. Knowing this is her fault, Kelly reunites the entire original crew to find a way back to the past. The timeline finally returns to normal when Doctor Finn manages to erase young Kelly's memory. 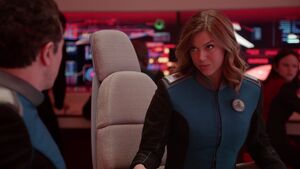 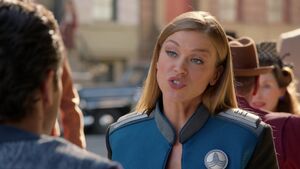 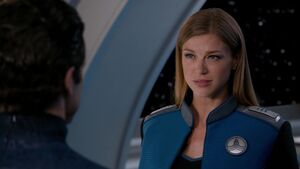 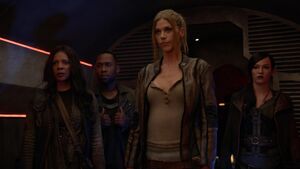 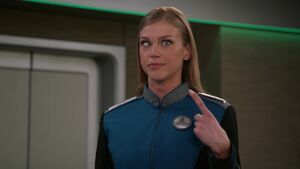 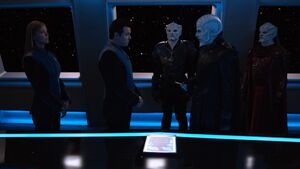 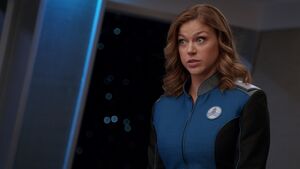 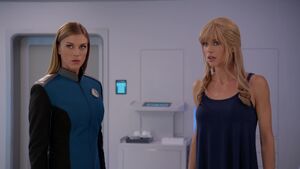 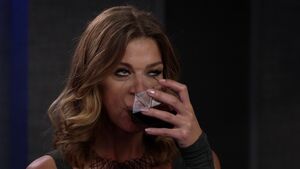 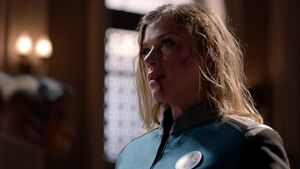 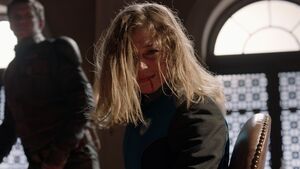 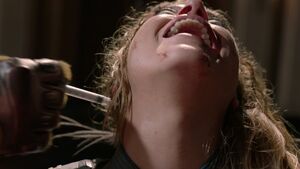