Ken Masters (also known simply as Ken) is the deuteragonist of the Street Fighter series, first appearing in the original Street Fighter. Similar to his friend Ryu, Ken's goal is to test his power against many different fighters and strives to become stronger, but holds more restraint due to not wanting to jeopardize his family life.

Ken is the son of a wealthy hotel tycoon. At age twelve, his father sent Ken off to train with his long-time friend, Gouken - a martial-arts master. Ken's father did not want his son becoming spoiled by fine living but, as he did not intend to stop providing for his son, Mr. Masters decided that having Gouken train him would give him the perspective to not let wealth go to his head. Gouken had recently adopted Ryu as a son and when Ken arrived for training, Gouken decided to train both boys together. Though Ken saw the training as a chore, he dealt with the situation by pulling pranks on Ryu.

As time went on, Ken and Ryu developed a rivalry interwoven with friendship, each trying to beat the other but with their training binding them, still a healthy respect for each other and a strong friendship. By age twenty-three, Gouken considered both boys' training complete. When Ken returned home, he put his skills to the test by competing in several Martial-Arts Tournaments. Ken was not at the first Street Fighter Tournament as he was competing in smaller ones for part of it, and meeting his future wife Eliza for the rest of it.

Ken would return to Gouken later that year to find him dead, murdered by his evil brother Akuma. Ken tried to find Ryu to tell him but Ryu was in seclusion and did not appear until the next Tournament. Ken informed Ryu of Gouken's murder, a fact which only Ryu coped with through the competition. When Ryu had entered the Tournament, Ken entered to compete with his friend. This would be his appearance in Street Fighter II. If Ryu wins perfectly, Akuma will show up as the last boss for Ryu. Official details are sketchy due to wanting to accommodate player choice/accomplishment, but recaps of events in future games seem to imply that Ken won against Ryu in the Tournament proper, though as Akuma is not a official entry, there is still room for their confrontation.

Ken has re-entered in each subsequent Tournament due to the impression he made in the second one. Though his life has been high maintenance in-between, learning to manage his father's business, marriage to Eliza, wanting to be there for Eliza during pregnancy.

Conceptually Ken was set to be the more flippant version of Ryu. He has the same training but is more emotional and motivated by a desire for fun over a desire for self-improvement. Whereas Ryu fights to be a great warrior out of a sense of pride, Ken fights for the joy of bragging rights.

Ken takes him training seriously but never at the cost of fun; Even the few times Ken has devoted himself to fighting out of revenge or honor he will never fight at the actual cost of fun, rather he simply prioritizes fun over duty, but other concepts like revenge or justice trump fun for fun's sake. While he can be brash, egotistical and arrogant at times, his heart is pure. Ken is generally kind, friendly, a good person and very easygoing which led him into starting a family of his own. He never backs down from a fight no matter how difficult it looks.

Like Ryu, he believes in honor, hard work, endurance and discipline. He always gives his opponents (who are friendly rivals) the utmost respect, whether it is his master Gouken, his best friend Ryu or his Capcom vs. SNK rival, Terry Bogard. He is also a worrywart when it comes to his family, nearly missing the tournament in Street Fighter IV because he did not want to leave Eliza so close to her due date, and only entered when she assured him she'd be fine.

Ken has the same fighting style as Ryu and was taught the same special moves as him. But as he and Ryu went their separate ways, Ken trained his skills every single day and even focused his energy on some of his special moves as well, though he did negelct some of his moves when he trained by himself. 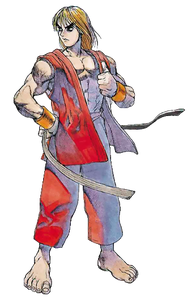 Ken Masters as he appears in the first Street Fighter game

Ken Masters as he appears in Street Fighter II 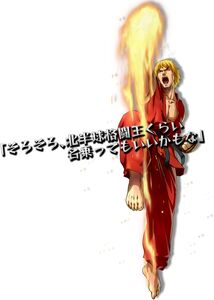 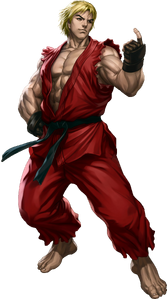 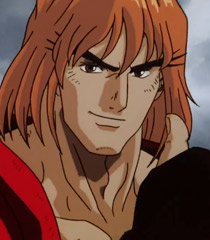 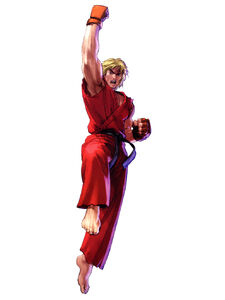 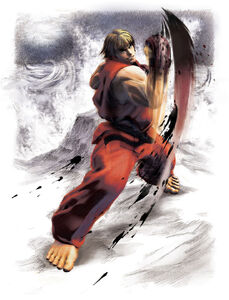 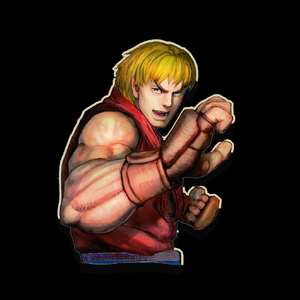 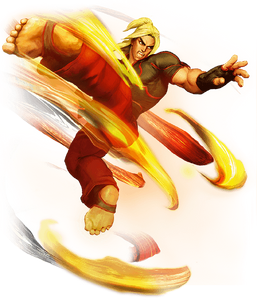 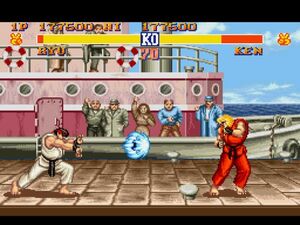 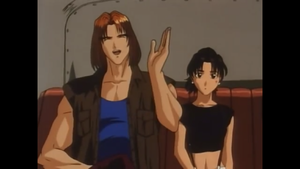 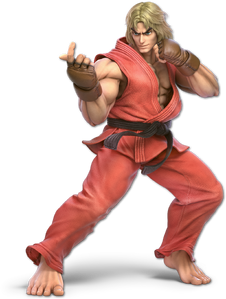 Ken as he appears in Super Smash Bros. Ultimate 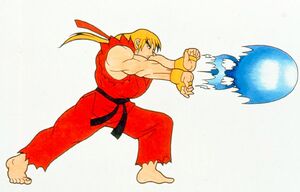 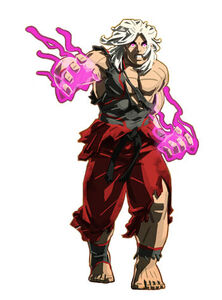 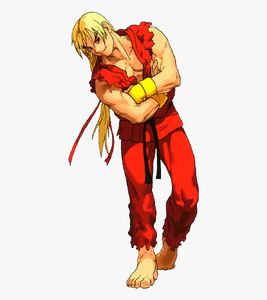 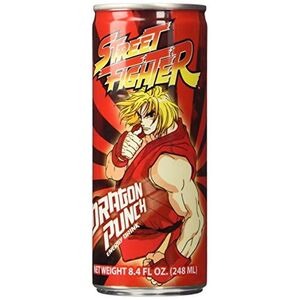 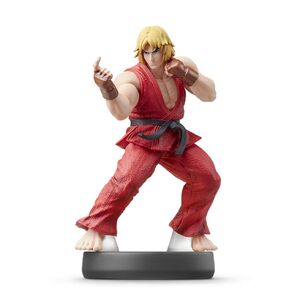 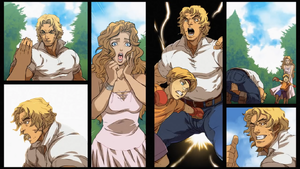