Kendall Gibley is the main character in the TV movie Getting Physical (1984); she's portrayed by Alexandra Paul. Alexandra is best know for playing Stephanie Holden on Baywatch.

Kendall Gibley is a 19-20-year old cute aspiring actress. However, her life is miserable – she broke up with her boyfriend, she has no real goals and she moves from one lousy job to another. In addition her sister thinks she's lesbian. Her main problem is her low self-esteem which has its roots in her being chubby and out of shape.

Kendall's problems get worse when she is mugged by two men. The police can't do anything since she is unable to describe her assailants. A young police officer (David Naughton) suggests that she should get training in using teargas or take self-defense classes so that she can defend herself.

The next day Kendall tries to enroll for a self-defense class at the gym. The class is held on the third floor, but having already walked one flight of stairs has left her exhausted. So instead of going to the third floor she wanders into a room on the second floor were dozens of women are pumping iron. She finds the women really attractive and becomes fascinated by their muscles. She wants to be as beautiful as they are and decides to become fit and muscular herself.

The gym is a strange and intimidating place for someone who has never been in one before. Her initial training is awkward and more or less unproductive. That is, until a former bodybuilder pro Nadine Cawley (Sandahl Bergman) takes note of her thinking Kendal has potential for competitive female bodybuilding. Nadine takes Kendal under her wing and together with her trainer husband begins to train Kendal. Nadine puts Kendal into a tough training program that would kill a lesser man or woman.

Under Nadine's tutelage Kendal pumps iron and starts to lose weight and get into shape. Slowly she begins to gain stamina and strength and her self-respect increases at the same rate as her muscles grow. She quickly becomes the rising star of the gym.

However, her newfound confidence and muscles are not to the liking of everybody. Friends, boyfriend Mickey and family have all a hard time to adjust to the new muscle girl. Mickey breaks up with her because he feels emasculated by her muscles and strength and her desire to become even stronger. Her father (Robert Webber) gets angry at the dinner table about her bulging biceps and likens her to a linebacker and a Marine.

Kendal is not discouraged and continues her training until she is ready for her first competition. The nervous yet confident Kendal impresses both judges and the audience with her lean muscles. Yet her greatest prize is her father's approval.

Kendall is a tall (178 cm), chunky, out of shape girl with brown hair. During the movie she transforms into a fit 62 kg bundle of muscle.

Prior to getting into bodybuilding Kendall's only notable skills were her secretarial skills from working in an office and her acting skills she had gained after taking acting courses.

After getting interested in bodybuilding she learned about fitness and nutrition. To get the body she desired she started a physical regimen that included weightlifting and running. Dancing and posing were also part of her training.

A few months before the filming started, Alexandra Paul had been shooting scenes for a movie called Just the Way You Are (original title: I Won't Dance). Due to production problems shooting for that film had to be postponed for six months. Getting Physical was filmed during those months.

Casting the extremely skinny Alexandra as an overweight character might appear as a strange choice. And it was and would cause problems further down the road, however, Alexandra and Kendal had some things in common as both were out of shape and neither knew what a gym was. But when Kendal was chubby and overweight, Alexandra was extremely thin and almost underweight.

Never the less Alexandra was picked from 160 applicants. "We all had to audition in leotards," recalls the 20-year-old Paul. "Franco Columbo ['Getting Physical's technical adviser and former Mr. Olympia] graded us on how much he could build us up. The other girls' upper bodies were too thin, but my back muscles were well-developed because I've always done a lot of swimming," Paul adds. "I had never been a good athlete," says Miss Paul. "I had always been the last person to be picked for a team. They used to call me 'klutz'. But that is why bodybuilding is a good sport for me – you don't have to be coordinated at all."

Alexandra's thinness caused naturally some problems, like how to make Alexandra appear overweight and how to transform her into a muscular bodybuilder. The first problem was "solved" by Alexandra wearing several layers of bulky sweatshirts at all times during the first part of the movie and making sure her character was shown eating at every opportunity.

The other problem, transforming the skinny Alexandra Paul into a muscular young woman proved to be a herculean task. As an ectomorph Alexandra would have a hard time to build significant muscles. "In order to get results very quickly, you have to double up the training program," Columbo says. "Women who compete in bodybuilding contests normally train for about a year. Paul had to be ready in six weeks. "Alexandra trained almost to the collapsing point," Columbo continues. "She was exhausted; she was walking like a zombie. In the beginning, she had no muscles. Over a few weeks she lost five pounds of fat and gained eight pounds of muscle."

The effects of proper workouts surprised Alexandra: "My body has changed remarkably in four weeks," Paul said during filming. "I noticed changes after the second workout. I've always been self-conscious about my body. Girls are. When I was 15 I wanted to be thin. I was 25 pounds lighter. Now I think it's better to be strong. I feel more aware of and comfortable with my body." After working out with Columbo for seven weeks, Alexandra emerged with muscles from head to toe. Right camera angels, lights and shadows further enhanced her muscular look in the movie.

Like Kendall's muscles in the movie, Alexandra's muscles in real-life caused problems. During filming Alexandra told, "My boyfriend is very supportive. He thinks I look better. ... and we work out on weights together." But afterwards she revealed that they had broken up because of her newly gained muscles and strength: "He doesn't like the fact that I've gotten this big," Alexandra said in Gadsden Times. "He doesn't like it when people comment that I may be stronger than him, or that I have wider shoulders than he has." The final straw was when "I was using heavier weights than he was."

After the film had been finished Alexandra was thrilled by and admired her new body, "I have hard muscles everywhere! I know it doesn't appeal to everybody, but I like it." Unlike her co-star she intended to continue with bodybuilding, she was "hooked": "Franco is going to give me a training program when the movie is finished. He told me if I work out 30 minutes three days a week, that will be enough to maintain it."

When Getting Physical had been finished the problems with Just the Way You Are had been solved and Alexandra returned to the French Alps to shoot her remaining scenes.  But the problem, according to Alexandra, was that, in those months between shots, she had changed a lot. She now had muscles. Paul was worried that she would not look like the same person. "I'm supposed to wear skin tight pants, but now they will show all these leg muscles I have. I'm a little worried about that." Even if that didn't turn out to be a problem, Alexandra was worried about what her muscles would do for her career. That was never found out as she did not continue her bodybuilding workouts for long and quickly returned to her more slender, less muscular appearance. This was unfortunate as six years later she had to start from scratch and build up her stamina anew when filming Laker Girls and then again in 1992 when she joined Baywatch.

In 2014, 30-years later, Alexandra mused that she never got as strong as she had been when the filming of Getting Physical had ended. 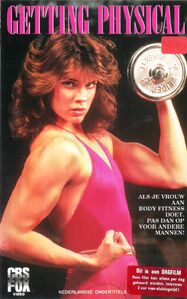 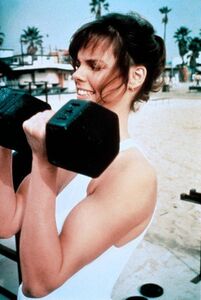 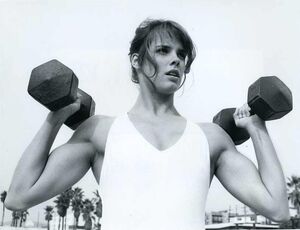 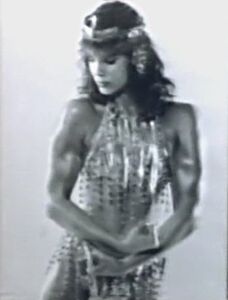 Add a photo to this gallery
Retrieved from "https://hero.fandom.com/wiki/Kendall_Gibley?oldid=2299984"
Community content is available under CC-BY-SA unless otherwise noted.