Kendall Morgan is the proprietor and lead scientist of the Amber Beach Dinosaur Museum. After Albert retires and gives the Purple Energem to the Dino Charge Rangers, she later acquires it and becomes the new Dino Charge Purple Ranger.

Based on previously released toys and roll calls, she can also be referred to as the Plesiosaurus Power Ranger Purple.

Not much is known about Kendall's past except that at some point she came across Keeper and the two collaborated to track down the Energems.

Kendall became in charge of the thriving Amber Beach Dinosaur Museum and frequently accompanied by her assistants Chase Randall and Koda for paleontology digs. She is also frequently pestered by waitress Shelby Watkins for dig-related work. Powers From the Past

After the formation of the Ranger team, Kendall later developed auxiliary Dino Chargers for the Rangers to use to defeat Sledge's monsters, and with Shelby's help she invented the E-Tracer. While she rarely engaged in battle, Kendall proved able to hold her own if need be. Let Sleeping Zords Lie

After Albert surrenders the Purple Energem, World Famous! (In New Zealand), the Rangers go to great lengths to find someone for it to bond with but have nothing to show for it. Desperate, Kendall falls for a plot by one of Sledge's monsters that leads to the Energem being stolen. Wishing for a Hero To correct this mistake, Kendall creates Get-Bot, a robot designed to seek out and recover Energems. She has the Rangers distract Sledge while she stows Get-Bot in a transport pod, but decides to stow away herself when Keeper is captured. On the ship, Kendall manages to find the Purple Energem, only to be captured and imprisoned in the same room as Keeper. Using nearby acid, Kendall corrodes the cell's floor, allowing the two to jump down to the corridor beneath. Cornered by two Spikeballs, Kendall attempts to fight them off, causing the Purple Energem to bond with her and instantly morph her into the new Purple Ranger.

Kendall rescues Keeper with the arrival of Shelby and Tyler, and the four escape Sledge's ship with the Plesio Charge Megazord and help defeat Sledge's ultimate monster.One More Energem

Kendall is confident, direct, and rarely gets emotional. She has a serious demeanor and doesn't make friends easily. Deep inside, she's a bit lonely, and starts to learn the deeper meaning of friendship as she comes to respect and understand her Ranger family. She isn't as forceful as a "commander," but she's more insistent than a friend. [1] 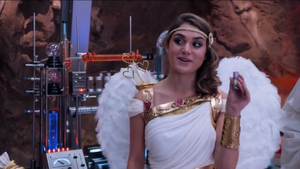 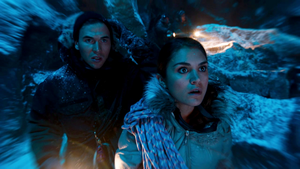 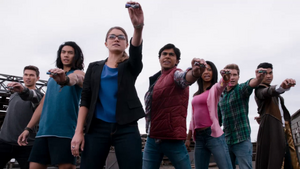 Retrieved from "https://hero.fandom.com/wiki/Kendall_Morgan?oldid=1901132"
Community content is available under CC-BY-SA unless otherwise noted.