Survive the apocalypse. (ongoing or failed).
Help lee get clementine back from the stranger before lee dies.
Kill Carver and escape his camp.
Protect AJ and Clemetine. (all succeeded)
Find purpose again and survive. (currently if left by Clementine, determinant)

Kenny is a major character in the The Walking Dead video game series, and the overall deuteragonist of the first half of the series. He serves as the tritagonist of Season 1, the deuteragonist in Season 2 and a determinant flashback character in A New Frontier (Season 3).

Whether Lee Everett sides with him and his family throughout the game will be dependent on whether or not he sides with him, (which is why the fanbase has mixed opinions on him.) He loses his son, Duck (AKA Kenny Jr.) when he is bitten by a walker (whether he is put down or not is dependent on the player), and loses his wife when she commits suicide. If Ben is saved, Kenny will sacrifice himself to make sure he is put down before he is eaten.

If Ben was killed in Episode 4, after making their way across the rooftops, Kenny bumped into Lee, causing the walkie-talkie to fall into a dark room of walkers. Christa jumped in to get it. Lee and Omid attempt to pull Christa out, but they can't reach her. Kenny jumped in and boosted Christa out. After that, Lee frantically screamed for Kenny as he fired his last shots. Lee was upset because he assumed Kenny was devoured by the walkers, but he remained focused on recusing Clementine.

It is revealed in Season 2, Episode 2: "A House Divided" that Kenny survived.

Kenny is the tritagonist of Season 1 and appears in all five episodes. Lee first meets him on Hershel's farm where his son almost dies at the hands of some walkers. Lee's choices throughout the season alter what kind of friendship he has with Kenny. Kenny can become either one of his closest allies or someone he has bad tension with. Kenny has a tough time getting along with a woman named Lilly and the two fight throughout the first three episodes. In Episode 2, Kenny kills her father after he has a heart attack, thinking that he might turn. Kenny eventually loses his family due to a walker bite and a suicide and starts to lose it and Lee has to help him get it together. Kenny eventually pulls himself together but feuds with Ben, another survivor when he discovers that he played a part in his families death. Depending on the player's choices, Kenny can forgive him and ultimately seems to die in two hopeless circumstances.

When Clementine makes it to a lodge with her new group, she runs into Kenny arguing with her group and the two get reunited. It turns out that Kenny had escaped the walkers and met up with a woman named Sarita whom he fell for and got into a relationship with. Kenny has friction with Clem's new group as he wants her to stay with him and not go with them. Arguments happen and Kenny eventually leaves with Luke to fix the power. When Carver attacks the lodge, Kenny shoots and kills one of his men and Carver responds by killing a good friend of Kenny's. If Clementine asks where Luke is, Kenny claims that he told him to take a hike. After a tense standoff, Kenny is eventually forced to surrender and is captured and taken to Carver's camp.

On the way to the hardware store as a walker-free settlement, Kenny tries to escape the truck and even manages to get his restraints off. Before he can do anything though, the truck makes a sudden movement and Kenny hits his head on the truck's wall making it impossible for him to make it out in time. When they reach the camp, Kenny confronts Clementine and talks to her about trying to find a way to escape. Clementine is unable to find anything and Kenny ends up having to do work around camp. Kenny ends up having to work with a man named Mike, but the two of them don't get along and end up getting into a fight.

Luckily, Clementine interrupts them letting them know that Carver murdered Reggie. This just inspires Kenny and the group to escape even more. After discovering that Luke is alive and wants to help them escape, Kenny and Luke's plans conflict at first. Clementine steals a walkie talkie to aid their escape and Kenny helps her hide it. Unfortunately Luke is caught by Carver who begins questioning the group as to where the walkie talkies have gone. Kenny takes the blame and ends up getting beaten brutally by Carver. That night the group wonders what to do next. A survivor named Bonnie offered to let them escape but Kenny's condition was terrible. Kenny surprised the group though by mustering up enough strength to move on.

Clementine is sent to Carver's office to use sound system to lure the Walkers and while she was doing this Kenny and the group are cornered by Carver. Carver holds them at gunpoint but Clementine manages to catch him off guard and Kenny and Luke punch him. Luke takes Carver's gun but cannot bring himself to shoot him. Kenny shoots Carver in both legs though and then proceeds to brutally beat him with a crowbar to death as revenge while Rebecca watches. Kenny then escapes with the others by rubbing guts on himself and walking through the Walker horde. 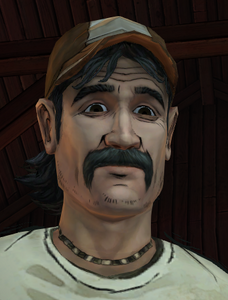 Kenny in the 1st episode. 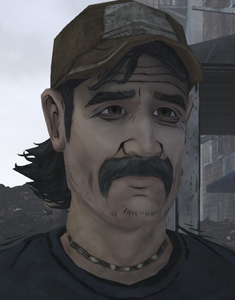 Kenny in episodes 2 through 5. 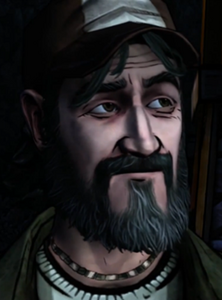 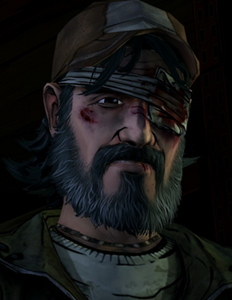 Kenny in Season 2 with his eye patch. 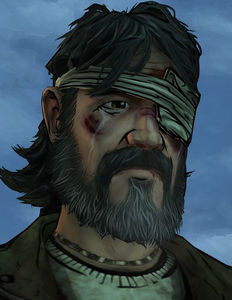 Kenny without his hat. 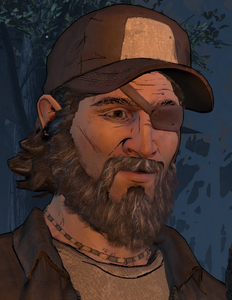