The Master of All Chinese Kenpō, Kensei the Slick

Lascivious Pacifist
Kensei Ma is one of the supporting characters of History's Strongest Disciple Kenichi. He is the lecherous master of all Chinese Kenpō, though he prefers to fight using soft forms. He is one the oldest masters in Ryōzanpaku.

As stated by Renka, Kensei is revealed to have a wife and three kids, including a 17-year-old daughter named Renka Ma, who followed him from China. Kensei was actually the leader of an elite martial arts organisation named Phoenix Alliance in China, made up of a hundred thousand followers. However, he viewed the responsibilities as a nuisance, so he left it all to his wife, and moved to Japan where he operates an acupuncture clinic. He also has an older brother, Sōgetsu, and an uncle, Ryō.

During the D of D tournament, Ma Kensei reveals to Kenichi his history with the Three Headed Dragon team of Kaku Shin Ten (Taichi), Chou Yin Lin (Bagua), and Yo Tekai (Xing Yi) who all hail from the Black Tiger White Dragon Alliance in China, a rival organization of Kensei's Phoenix Martial Artists Alliance. He apparently meet them when they tried to attack his school. Kensei quickly defeated all of them, however he is impressed with their potiential as martial artists, espeically with Kaku, and made him a propostion to become his apprentice. Kaku turned down the offer and left with nothing but anger and hatred for Kensei ever since.

Kensei is most often seen attempting to take revealing pictures of beautiful women (especially Shigure  and Miu)which often earns him the wrath of the pair, though this does nothing to deter him from the habit. His perverted behavior has even gotten worse as the series progresses, such that whenever he fights a female opponent he wants to use his "Ma Style Restriction technique", which is basically where he ties them up with their own clothes. He is proven to be very persistent, as he repeats his perverted antics on a daily basis, despite dangerous traps set by Shigure near the spa, where she and Miu takes a bath. He even made a picture book of Miu which he sold for a profit to Kenichi (he said he has one of Shigure too) and convinced Kenichi to move into the dojo by introducing the prospect of developing his relationship with Miu, demonstrating good salesmenship. Akisame commented that he could 'sell ice to eskimos'. In contrast with his present-day image, he was said to be a charming and handsome young man in his youth, and was very popular with women. This came to a shock to Kenichi, who then sympathized with his aging master, who bluntly refused to accept the sympathy.

He seems to enjoy reading, as he's tipically seen reading perverted magazines of beautiful women. He has an odd habit of standing or sitting in odd positions whenever he's either training or something is bothering him or even reading something upside down that he doesn't seem to notice till someone points it out for him. He even stands on objects while balancing himself while reading when he's training.

Under all of this however, he is shown to be a very kind and wise person at heart who seems saddened at the violent uses of Martial Arts in the world, wishing the world could be more peaceful (and perverted) which was perhaps born from his own estranged relationship with his brother. In battle, he prefers to disable enemies without lethal force, only foregoing this practice when fighting other Master class Martial Artists. Kenichi also states that despite all of Kensei's character flaws, they were "nothing compared to the greatness of Master Ma" and readily admits that he had never doubted Kensei even once. As noted by Kenichi, he has a habit of yelling "Chowa" whenever he fights. Ironically enough, he is the only one among the Masters that is actually capable of cooking and generally does so whenever Miu is in a position unable to cook. He has a odd habit of calling all the other masters thier names with "don" at the end.

In the manga, his surname is pronounced Ba. In the anime and some translations of the manga, it is changed to Ma, possibly because this is the usual Chinese pronunciation.

Despite his short and unimposing appearance, Kensei is a remarkably powerful combatant. Whether modern, traditional, or forgotten to the rest of the world, Kensi has mastered with absolute knowledge and proficiency all types and styles of Chinese Kenpo, both unarmed and weapons, as well as all their respective techniques. His prowess has been recognized all through-out China as its greatest ever martial artist (rivaled only by his older brother Sōgetsu). While a firm promoter of Katsujinken and and well-known for his specializing of soft-style forms in combat, Kensei can demonstrate great destructive power when provoked. In all the fights he has been seen in, he has yet to take any serious injuries, often stopping just in time to inflict as little harm as possible to his opponent. 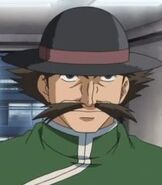